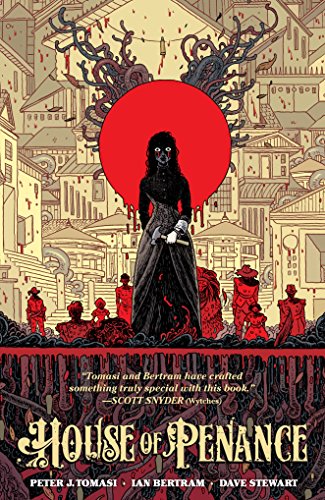 “House of Penance is a masterpiece . . . Brilliantly written and beautifully illustrated.”

"Once you cross my threshold and enter my home there are only three things I require of you. There shall be no violence, no lying, and no lateness. Break one of these, and you forfeit your right to remain here."

Such is the command of Mrs. Sarah Winchester, widow of the late gun magnate, William Winchester, as she gathered workers to build, tear down, reconstruct, and never stop working around the clock on what would become known as the Winchester Mystery House.

But for Sarah, it was more than a building project. To her it was the only way to keep the demons at bay, to keep the ghosts and spirits of those killed by the famous, and infamous, Winchester Rifle from collecting her soul and taking it down to hell. Sarah believed her fate was intertwined with a curse upon the Winchester name due the overwhelming amount of deaths caused by the weapon that was known as "The Gun That Won the West.”

Having lost her husband and daughter to disease, one after the other, Sarah set about building a mansion of such grotesque construction that stairways led to nowhere, doors opened onto thin air, and hallways were dead ends—all in the hope that the maze would confuse the ghosts and specters that haunted her and give her some protection.

Peter J. Tomasi's narrative takes this legend and twists it, warps it, creating a nightmarish vision of a woman always on the edge of collapse, but who refused to cede one iota of control to her husband's family, the workers she hired, or the demons that tortured her in her slumber and, at times, during her waking hours. It is a terrifying tale of redemption, loss, madness, murder, violence, and the toll guilt takes on the human soul.

Coupled with Ian Bertram's incredible artwork, which is reminiscent of a mash-up of Edward Gorey meets Tim Burton, the tale told is filled with blood, blood, blood. Pools of it. Tentacles of blood that literally wrap themselves around the house and the characters. Blood that drips from the walls and burst from mirrors. Blood borne of guilt and shame, determined to claim one last Winchester for the curse that will not be satisfied until all soul debts are paid.

House of Penance is a masterpiece within not only the graphic novel horror genre, but within the medium as a whole. Brilliantly written and beautifully illustrated, it should be considered a must have in every readers' collection.