In a House of Lies (A Rebus Novel) 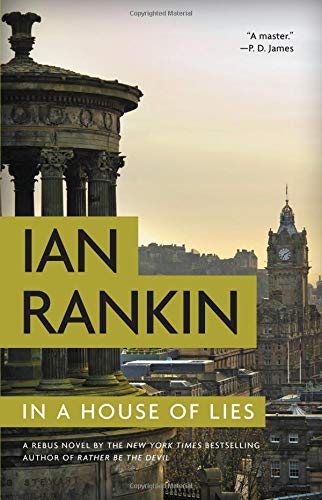 “a high-quality police procedural that covers off all the classic elements of the sub-genre: a team of investigators, more than one case to be followed, and careful attention to detail.”

When skeletal remains are found in a derelict car hidden in the East Lothian woods near Edinburgh, the investigation quickly turns inward to a botched missing person case conducted by Scottish police more than a decade ago.

Retired police detective John Rebus is one of the former investigators implicated in having mishandled the search for Stuart Bloom, a young private investigator. At the time of his disappearance, Bloom was working for Jackie Ness, a producer of low budget horror films. Ness happens to own the woods where the remains are found, an area Rebus insists was thoroughly searched in 2006 without results.

Rebus inserts himself into the investigation to assist Detective Inspector Siobhan Clarke in what is now a homicide investigation, but his motives seem unclear. Does he also want to cover up certain details concerning what happened in the Bloom case the first time around?

In a House of Lies is Ian Rankin’s 22nd Rebus novel. It’s a high-quality police procedural that covers off all the classic elements of the sub-genre: a team of investigators, more than one case to be followed, and careful attention to detail.

Some of Rankin’s secondary characters are familiar to readers of the series. DI Siobhan Clarke has appeared several times before, notably in The Falls (2001) and Even Dogs in the Wild (2016). Likewise Malcolm Fox, the perennial Police Scotland thorn in Rebus’s side. Organized crime bosses Morris Gerald Cafferty and Conor Maloney, who show up to represent the other team, are typical thugs who mix badness with upward mobility. Cafferty’s primary purpose, however, seems to be to serve as a mirror to Rebus’ own ambivalence toward the law.

While Siobhan gives Rankin an inside presence with Police Scotland, the spotlight inevitably finds Rebus. Since the novels have been written in real time and Rebus was born in 1947, the author must deal with the problem of his protagonist’s advancing age in each new installment.

After Rebus was forced to take retirement in Exit Music (2008) because of Police Scotland age restrictions, various ways must be found to bring him back into a new story. As with Michael Connelly and his famous protagonist Harry Bosch, Rankin’s best plot device is a cold case with personal implications for Rebus, as we see here in the current offering.

It’s a situation that seems to bring out the best in Rankin as a writer. While Rebus was always an outsider as a Police Scotland detective, his exclusion from the rights and privileges of a sworn law enforcement officer with a badge and identification is now much more sharply felt. Desk officers block him from entering the police station because they don’t recognize him. Detective Chief Inspector Sutherland throws him out whenever Siobhan sneaks him in, and the team eyes him with tight-lipped suspicion.

Perhaps most sad is the confrontation with a muscular witness who is ex-army and much younger than Rebus:

The man “gave a thin smile. ‘Bet you thought you were a bit tasty back in the day, eh, old-timer? Nowadays I’d have you on the canvas before you could blink.’

While we’re perhaps intended to believe that Rebus could hold his own in a scuffle with this guy, we feel uncomfortable that a man in his late sixties would be this willing to enter into fisticuffs with someone who could clearly inflict serious injury on him.

But while time seems to have passed Rebus by, in many ways it has not. His power over readers has always resided in his courage and his willingness to stick out his chin and risk life and limb to get to the bottom of a case. The old guard and their old ways are constantly disparaged in favor of the new breed, such as Clarke, Sutherland, and his team, but none of these characters has a shred of Rebus’ drive, his nerve, or his relentlessness. These traits are what make Rebus Rebus, and what make Rankin such a successful storyteller.

If you’re an avid reader of crime fiction, In a House of Lies is an experience you won’t want to miss. The storylines are engaging and nicely paced, the characters are well drawn and carefully developed, and the themes of aging, transition, and perseverance in the face of diminishing returns are compelling.

While Ian Rankin has often been described as Britain’s finest detective novelists, In a House of Lies clearly demonstrates that he remains among the very best crime fiction authors in the world.