A House at the Bottom of a Lake 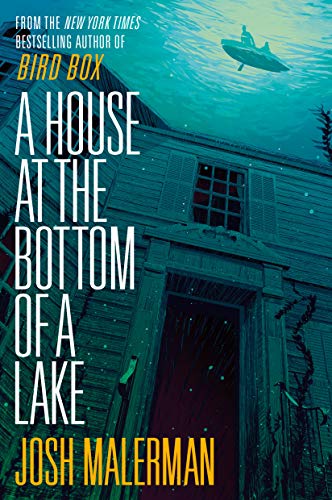 “a lovely, slightly eerie, and definitely haunting story—of the magic of young love and the attraction of the unknown.”

James wants to impress Amelia, by taking her canoeing.

‘Yes?’ James said, not sure he’d heard her right.

Both seventeen. Both afraid. But both saying yes.”

And thus it begins.

They have that wondrous first date, skimming across the lake in James’ uncle’s canoe, and then, there’s another lake. “The second lake was more beautiful than the first. And more remote. It was smaller by a third of the size, and the shores were so crowded with trees it appeared there was no land there at all.”

There’s a service road at the shoreline, and as they follow it, they find a surprise—a graffiti-filled tunnel—leading to a third lake. “The water was murky, as if mud from the lake floor had come up to see who had cleared the tunnel. Given the grandeur and beauty of the first two lakes, there was no reason to ever visit this third one. It was an afterthought. The clogged gutter of an otherwise beautiful home.”

But this lake possesses something besides fish and dark, muddy water. In its depths hides a house. “They looked at each other and it was stated silently that they were going to check it out. No self-respecting seventeen-year-olds on a first date could paddle away from this.”

They explore the house and discover it’s a complete two-story dwelling, sitting on the bottom of the lake. They need diving gear to investigate easier, so they borrow James’ cousin’s diving suit and take turns using it to explore the house. That’s not good enough. Scuba gear is needed. That gives them mobility and they can both dive at the same time.

They explore the entire dwelling, finding it completely furnished even to salt and pepper shakers on the kitchen table. The front door hangs open, inviting them in.

There’s one odd thing. Nothing floats. In this sunken house, the furniture, the pictures on the walls, everything stays where it should, as if it’s on land. There are even light bulbs in the lamps.

At every free moment, they explore the house. It becomes an obsession; when they’re not inside it, they think about it, dream about it, what it means, why it’s there. “They fell in love in the third lake, beneath the surface, exploring the impossible house, diving together, improving the skills they learned in scuba class, eating lunches in the canoe, falling asleep in the canoe, sunning in the canoe, exploring each other’s bodies in the canoe, too.”

And then, they discover the basement—a basement descending into the lake bottom, in a house where nothing moves, except some clothing floating out of a closet, clothing that seems to follow them through the house.

Then, the ceiling creaks, and there’s the sound of footsteps above them, and someone laughs.

Back in the canoe, they make a decision.

“‘There’s somebody in there,” James said.

‘What do we do?’ Amelia asked.

Going isn’t easy; all they can do is think about the house, missing it,

James awakes to find his bedroom flooded, all other rooms dry. A burst watermain? Singling out his room?

“‘It came to my house last night. We left the lake, but the lake wants us back.’”

They return to the lake, and it happens, “the scariest thing that could happen inside a house underwater.” “The lights come on. The house lights, in the ceiling, in the halls, on every window and wall.”

Although this has the necessary elements for a horror story, there’s no true sense of the horrific. Instead, it’s filled with the wonder of childhood curiosity, belief in the magical, of exploration of the unknown, of having an adventure.

The occasional lyrical, if darkly poetical, descriptions of the underwater dwelling definitely give it a mystical, otherworldly flavor, beautiful, but with a hint of danger crouching at its edges.

The house’s allure draws James and Amelia back again and again, into what may be a trap, or perhaps the house is simply testing them—seducing them—to determine if they are worthy of it, as if this unknown house that has become their secret, and theirs alone, will one day become something more to them.

This is a lovely, slightly eerie, and definitely haunting story—of the magic of young love and the attraction of the unknown. And the ending? Interpret it as you will.