Summer Hours at the Robbers Library: A Novel 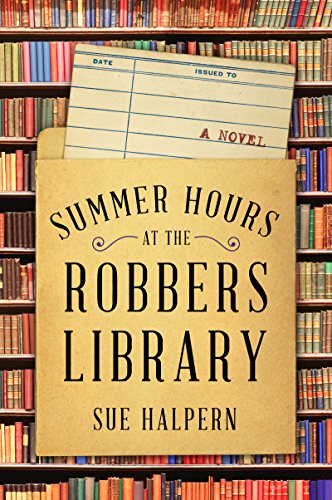 This intense character-exploration story draws you along wondering, What the heck happened to Kit to make her so closed to human relationships?

The novel’s structure carefully conceals the answer until the end. Little clues are trickled out, enough to give you some ideas and keep your curiosity a-humming; meanwhile, the author adroitly distracts you with other people’s sad and sometimes oddball tales.

The point, ultimately, is how those other people help restore Kit’s engagement with life and reactivate her compassion, opening her back up to growth and opening the door to happiness.

Underneath her evolution is a subtle study on how post-traumatic stress isn’t limited to people who have suffered violence and horror. Rather, accumulated losses and psychological agonies can, if relentless enough and cruel enough over a long enough period, add up to the same effect.

Kit’s transformation occurs in a small New England factory town long past its prime. This setting, as it happens, creates the book’s only problem.

The town is identified as Riverton, New Hampshire, and is sited “on the shores of the Connecticut” [river]. Trouble is, Riverton is a real town in New Hampshire, and it is nowhere near that major waterway, which defines a large chunk of New England.

Most readers will not notice or care about this discrepancy, especially if they are not among the millions who live in New England. Residents who do recognize it might be thrown out of the story and have trouble trusting any other facts that are presented in the book.

What makes it grating to those who know is the fact the main character is a reference librarian, and one of the primary characters she is involved with is researching the town’s history. Such people are fact-oriented, so it seems weird to have such a basic reality underlying the book be, in fact, unreal.

(The book contains the usual disclaimer: “Names, characters, places, and incidents are products of the author’s imagination or are used fictitiously and are not to be construed as real,” et cetera. In that case, why didn’t the author or editor just throw in a W—making it Rivertown, a nonexistent place in the state—and take it from there? The discrepancy would vanish.)

That hiccup aside, the novel does an outstanding job of tackling a major storytelling challenge: multiple points of view and timeline changes. The voices shift from Kit in first-person, to Kit in third-person, and other characters in either-person, swapping at both chapter breaks and within chapters, moving between past and present and speculation about the future, with everyone’s threads weaving together.

Often, such time and head hopping creates a bumpy and disorienting narrative. The author, however, slides between perspectives and contexts like silk, so that the story unwinds smoothly and steadily, showing many truths about life and common experiences that tie people together.

The plot is how middle-aged Kit ends up mentoring teenager Sunny, who is assigned by the court to work in the library for the summer as punishment for shoplifting a dictionary from a book store. Sunny is the home-schooled child of an unmarried, extremely alternative-lifestyle couple who have programmed her in their beliefs. She’s a smart thing, though, and at the cusp of discovering herself and breaking away from her origins, like most teens. The reluctant Kit is exactly what Sunny needs to help her take the giant step from child to young adult.

At the same time, Sunny is exactly what Kit needs to pull her out of pathological introversion and wallowing in the past. They are both thrown for a loop by the arrival of Rusty, a passively ambitious guy who rode the tsunami of success in the financial speculation industry, only to have it disintegrate beneath him. He follows an obscure family legacy back to Riverton, and draws both Kit and Sunny into his quest.

Their dynamics, augmented by other library employees and habitués, along with Sunny’s off-the-grid parents, drive the story. Kit, Sunny, and Rusty each have a soul-crushing personal conflict to overcome, and need the others to help them do it.

So, quietly and eloquently, Summer Hours at the Robbers Library seduces you into caring about a cast of characters representing people you probably know, if not yourself, too. It provokes deep thoughts and exposes profound truths in a classic literary style without taking itself too seriously. Kit’s sarcastic honesty, Sunny’s undaunted curiosity, and Rusty’s blithe resilience lead them all to get what they deserve in an upbeat way.