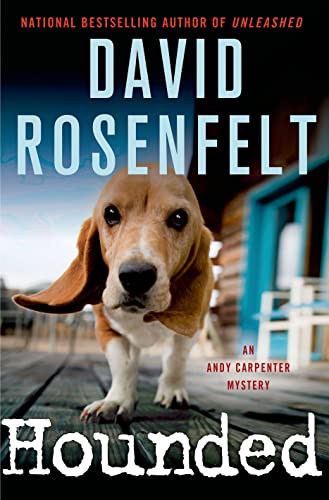 Andy Carpenter is a lawyer and doesn’t have to work. A windfall lets him pick his cases, but when he does, he goes all in to defend his client. He does not have to think about whether or not to take this latest case because the accused is one of his best friends, policeman Pete Stanton. You can tell they are friends; most of the conversations between them consist of insults.

Pete calls Andy from the crime scene, having just discovered the body of ex-convict Danny Diaz. He wants Andy to come and take Danny’s eight year-old Ricky (and Sebastian the basset hound) so the boy will not go into foster care. Pete is framed for the murder, and it’s a pretty good frame. Danny was a snitch for the cops and implicated Pete in a drug scheme.

Truth be told, Andy is a dog guy, and he feels more comfortable with Sebastian than Ricky. Andy and an ex client run a dog rescue, so he can place the dog.

Andy’s girlfriend Laurie helps with the kid stuff, and Andy starts systematically tearing down the case against Pete. It’s a long road involving a drug company and ex-cons, mobsters, and a pretty high body count.

The real fun in this book is watching Andy bond with Ricky. One night after preparing for trial, he looks in on Ricky- and notices the floor covered with toys. He admits he bought half of the toys himself; however, Ricky calls every male he meets Uncle—but not Andy. When Andy realizes that bugs him, the reader can predict the future.

Most murder mysteries are fantasies of the comfortable variety and David Rosenfelt is an award-winning writer who masterfully combines Grisham-like courtroom scenes with James Herriot’s love of dogs.

Rosenfelt is a native of Paterson, New Jersey, and writes about gritty mobbed-up Jersey very well, a welcome relief against too much cuteness. It’s a winning combination, and readers happily overlook the holes, like the how social services would allow any boy placed with two people who have very little experience with kids.

All in all, if I were going into court and couldn’t get Perry Mason, I’d take Andy Carpenter.