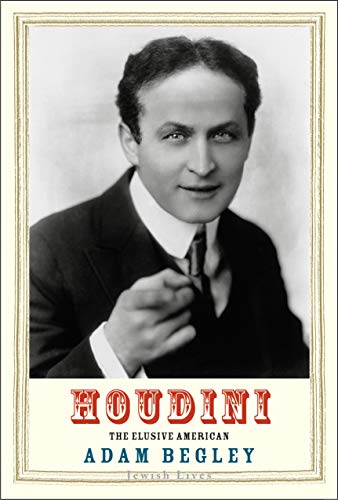 “Harry Houdini belongs to that pantheon of Americans whose name is instantly recognizable—and in some places revered—by generations of fans born long after his death . . .”

Harry Houdini belongs to that pantheon of Americans whose name is instantly recognizable—and in some places revered—by generations of fans born long after his death on October 31, 1926. Houdini is remembered for unparalleled triumphs in stage magic and feats of derring-do.

Over decades his iconic status flourished through biographies; a highly fictionalized 1953 movie starring husband and wife Tony Curtis and Janet Leigh as Houdini and his wife Bess; and a cameo appearance in E. L. Doctorow’s bestselling novel, Ragtime. Modern Houdini devotees have a lively presence on the internet, including a few websites that reveal the secrets to his astounding magic tricks and daredevil escapes. Undoubtedly Houdini would be mortified.

A rarely explored aspect of Houdini’s life is his Judaism. Though not a pious man, Houdini understood that being Jewish and the son of a rabbi made him different from the larger gentile culture that was the United States in the early 20th century. This is a recurring theme in a slim but comprehensive new biography Houdini: The Elusive American by Adam Begley, part of the Yale University Press series Jewish Lives.

The subtitle encapsulates Houdini’s life in two well-chosen words. He was born Ehrich Weisz in Hungary in 1874. The family moved to America four years later, where they changed their surname to Weiss. Unlike many Eastern and Central European Jewish immigrants, the family didn’t settle in New York or even Chicago, but rather in the rural town of Appleton, Wisconsin, where Ehrich’s father was hired to serve as rabbi for a small congregation. The job did not last long. After Rabbi Weiss was let go the family moved to Milwaukee. Life was uneasy and cash-strapped, forcing the household to jump from apartment to apartment.

By age nine Ehrich understood that life was itinerate. He briefly worked as a newsboy, but like many with young Jewish immigrants, the world of show business beckoned. He became a trapeze artist under the name “Ehrich, the Prince of the Air.” From there he followed the unique dream of many an American boy by running away to join a circus.

Ehrich ended up stranded in Galveston, Texas, was taken in by a sympathetic couple, then rejoined his family who by now resettled in New York. The only job Ehrich could find was the mindless toil of a factory sweatshop. After Rabbi Weiss died of cancer, Ehrich grew increasingly devoted to his mother Cecilia in a love that bordered on obsession—an Oedipal loyalty that lasted years after her death in 1913.

Desperate to get out of the drudgery of factory work, Ehrich went back to the stage performing a few magic tricks with a partner. He grew enamored with Robert-Houdin, a renowned French magician whose name was legendary among theatrical conjurers. Ehrich changed his name to Harry Houdini—the “i” transforming the surname into “Houdin-like.”

At 21 Houdini wed his stage assistant Bess Rahner. Younger brother Theodore, using the stage name “Hardeen,” became a protégé, and together the trio toured vaudeville houses throughout the United States. Houdini’s tricks astounded audiences, but he felt stifled by the conventions of stage work. He was determined to conquer unknown vistas other magicians only dreamed of. With a combination of hard work and sheer will, Houdini turned himself into a living American legend.

People wanted to see him do the impossible, and thus his body became Houdini’s most important prop. He started with PR stunts, escaping from locked jail cells in the towns where he was touring. Next was a literally death-defying escape, with Houdini handcuffing himself onstage before being immersed into a water-filled milk can. It still was not enough. Public spaces became his new theater. He was restricted into straightjackets and dangled above breathless crowds as they watched him wriggle his way to freedom. He took the water immersion from milk cans into the realm of the impossible: being shackled into locked steel boxes and then tossed into rivers before emerging unencumbered on the surface minutes later.

Houdini was the master of reinvention, embracing new technologies with gusto. Flying machines fascinated him. He acquired a small airplane and took to the air, becoming the first person to fly over Australia. Motion pictures became part of the repertoire as he starred in and directed a few spy action films. Magazine articles and books were another Houdini staple, though his works were largely penned by series of ghostwriters including the upcoming young writer H. P. Lovecraft. In a move that surprised many, Houdini published a book that disparaged his former idol Robert-Houdin.

Houdini’s fan base included Sherlock Holmes creator Sir Arthur Conan Doyle. The two became close companions, nicknamed Pooh and Piglet in honor of Conan Doyle’s towering stature over the shorter Houdini. Yet their relationship was doomed to an acrimonious end. Conan Doyle grew enamored with the widespread spiritualism movement of the early 20th century, a cultish belief pockmarked by mediums who claimed to communicate with the dead. Houdini, the master of illusion, knew a fraud when he saw one. He crusaded against these clairvoyants, exposing the elaborate trickery behind their seances. The enraged Conan Doyle broke off their tight bond.

Begley weaves these disparate threads throughout the biography in a compelling narrative, all the while maintaining a subtle reminder that Judaism was on the periphery of Houdini’s life. Houdini worked in an era where anti-Semitism was open and restrictions within the show business world were a given, including blacklists for Jews when it came to theatrical bookings and hotel accommodations.

As Bess was Roman Catholic, Houdini and his wife presented themselves as a Christian couple, often as a matter of safety. “I was never ashamed to acknowledge that I was a Jew, and never will be,” he confided to a friend, “but it is awful what I hear from people that are Jew Haters, and do not know that I am a Sheeny.” When America entered the Great War in 1917, Houdini joined forces with Al Jolson and Irving Berlin in a unique benefit performance dubbed the Rabbis’ Sons Theatrical Benevolent Association. Given the times, it was a brave public move by all three entertainers.

Begley is at his best in unveiling how Houdini was Houdini, on stage and off. He also debunks the many mythologies surrounding Houdini’s death on Halloween in 1926. There was some speculation that Conan Doyle and his spiritualist minions concocted a well-devised hit on his former friend. Another familiar story is that a college student took up an offer to punch Houdini’s chiseled midsection. Houdini didn’t brace himself before blow, resulting in a ruptured appendix that killed him days later.

Neither story is true. The reality is that Houdini was already a sick man, but resisted appeals that he should to go to a hospital. A burst appendix and the resulting peritonitis ultimately led to Houdini’s death. It is unlikely that the punch to his stomach exacerbated an already grave condition. His legion of fans was shocked by Houdini’s sudden demise. Some 2,000 mourners filed past his coffin to pay their respects at Houdini’s wake.

Death became Houdini. Long before he died Houdini and Bess devised a secret word that only the two of them would know should any charlatan claim that Houdini was trying to speak from beyond the grave. No medium ever cracked the code, try though they did. Bess took the secret word to her own grave as well.

Late in life she penned a letter to Conan Doyle, given Houdini’s former friend the final word on her husband’s ultimate legacy. Wrote Bess: “It was Houdini himself that was the secret.”