Hotel on Shadow Lake: A Novel 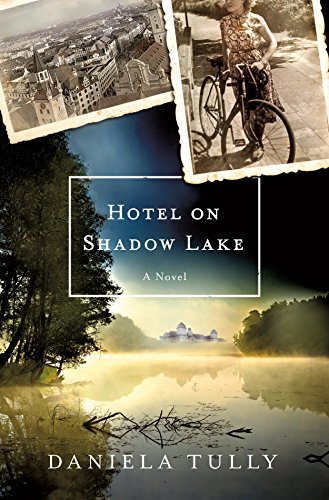 Martha Weisberg lives a carefully crafted existence. Her days run together one like another and she finds this predictability comforting. But when the Berlin Wall comes down in 1990 and a mysterious letter arrives at her door, her comfortable life comes crashing down and the secrets she fought hard to suppress bubble up to the surface.

In her debut novel, Hotel on Shadow Lake, Daniela Tully effortlessly guides her readers from 1990 Munich, back to the Germany of 1938 and the atrocities of the Third Reich. Then in 2017 Martha’s story is picked up by her granddaughter, Maya, who travels to New York State where Martha’s remains have inexplicably been discovered 27 years later.

Maya is much like her grandmother. She likes things calm and predictable. Unable to have close, intimate connections she languishes at a failing bookstore. But when her father tells her where her grandmother has been found, she forces herself to go to New York to try and understand why her grandmother abandoned her all those years ago, and how she ended up so far from home.

Once Maya arrives in New York, she learns that her grandmother was murdered. The Montgomery Hotel, where Martha was last seen, is the perfect setting for a tale of mystery and suspense. Isolated, with closed-off hallways, sinister owners, a specter who seems to haunt the periphery of Maya’s consciousness, and dense, spooky woods, it is the perfect set-up for a little gothic terror, and Tully does not disappoint.

As Maya investigates the hotel, and its owners, she discovers that they have a few secrets of their own. But when she realizes that Ben, the guy she has fallen for, is part of the Montgomery family, things become complicated . . . and more than a little dangerous.

While Hotel on Shadow Lake is mainly based 27 years after her death, the story is really the story of Martha Weisberg. Tully’s writing shines brightest in her descriptions of the horrors of life under the Third Reich for a free-thinking woman. The expectations for beauty, homemaking, and enlarging the ranks of the Nazi regime by birth are painstakingly detailed. The danger and suspense keep you turning the page and you cringe witnessing the abuse and torture endured by those who stood against evil.

Reminiscent of Stoker’s Dracula, Tully employs a variety of media to tell her story —letters, old historical pamphlets, and journals—and, while this could be clumsy, she pulls it off brilliantly. The pace for fitting together the puzzle pieces is good and the story does not get mired down. While those mystery purists may feel a sense of frustration with the fact that the clues in the story are almost always simply handed to Maya, it is important to remember she is no detective. She didn’t go to New York to discover a murderer; rather she went to discover her grandmother who, as it turns out, was pretty remarkable.

Maya discovers her grandmother had many secrets, and these secrets are what defined Martha Weisberg. As Maya unearths her grandmother’s life story, and learns of her remarkable strength and loyalty, she also learns a bit about herself in the process. This knowledge ultimately enables her to live a richer and fuller life. The last thing Martha Weisberg ever said to her granddaughter was, “Do for me what I couldn’t,” and as Maya begins to understand the strength and dignity that defined her grandmother’s life, she finds the strength to do just that.

While Hotel on Shadow Lake has all the elements of a good mystery, a gothic horror, and historical fiction, in the end, it is ultimately a study of family and connection. It is a sobering reminder that good, ordinary people can easily get caught up in bad, evil ideologies, and it is an affirmation that love never dies.