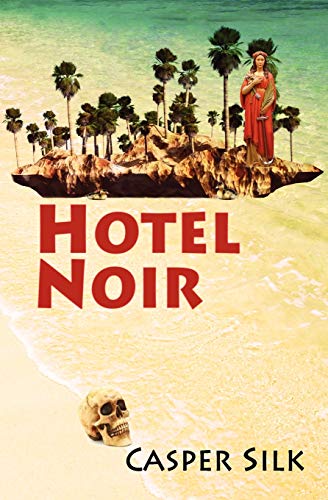 “. . . filled with wonderfully zany characters Agatha Christie would have killed for.”

Welcome to the Hotel Noir, peerless gem of hospitality and sole holder of a Michelin star on the island of St. Germaine.

When the controversial American author Francis Stein is stabbed to death in the hotel’s environs, the search for his murderer takes islander Bat Manley north to the other half of Stein’s double life, south to St. Germaine’s vice-ridden slums, and finally into the realm of the psyche, where the blind see and the dead speak.

A noirish combination of F. Scott Fitzgerald and early P. D. James on steroids, what stands out the most in this literary endeavor is the evocative writing, the author’s ability to capture a moment in time and take us there, to capture a character entirely in a few phrases, to infuse the reader with a sense that she is right there, participating in a story as it happens, as told by a narrator who knows how to weave a web and pull you in without your realizing that you are caught. Like this:

“Night at the Hotel Noir. At the Hotel Noir it is always night. The epicureans, sun worshippers and crooks that comprise her clientele rarely stir here in daytime; they are sleeping off hangovers, smothering in dreams. Open the shades and they shrink from the light, such harsh light in these tropics.

“The proprietress, Guinevere Baldi Blanc, applies fresh cucumber slices to her eyes after each meal. She wears red hats, orange hats, purple hats with brims the size of parasols. She is not from this place, lacks pigment. Her husband, they say, bought her from a pimp on the outskirts of Marseilles. These days he is seldom seen in her company, seldom seen at all, but every so often one hears his commanding double handclap, sole reminder of his rule over the affable slow-moving staff.

“The hotel, once the finest on St. Germaine, has dropped category in recent years. Gone the lust-struck heiresses and dethroned royals. Gone the red carpet and white gloves. The upholstery has grown greasy with tanning oil; the ceiling fans whine; the begonias sag. A blind soothsayer feels her way through the lobby, telling fortunes for the price of a meal.

“I am a witness to the decay, having wintered at the Noir for twenty-five consecutive years—except for the winter of ’82, when I lost track of time. Brett Foster McCabe was murdered here that New Year’s Eve, still wearing his paper party hat and too drunk to feel the knife thrust. McCabe, like most, had come to the island to chase women and throw his money around. His murder was not personal, simply the natives’ way of controlling the tourist population. An occasional knifing tends to scare people off for a season or two.

“Until promoters lure them back with cheaper room rates and easier vice. There seems little hope for St. Germaine. Every year her waters grow more murky, her boulevards and golf courses more unkempt, and the very people who vow to save her—politicians, developers, evangelists—sink her deeper in debt and set the citizenry at one another’s throats.

“Yet each November, something—a melancholy wind, the sense memory of frangipani blossoms—draws me back to the doomed little island. I check into the Hotel Noir, where my suite is always ready and the barman remembers to add a second olive to my martini. Apprised of my arrival, Madame Blanc sweeps through the lobby in one of her riotous chapeaux to plant the two obligatory pecks on my cheeks. Her stock greeting: ‘But how pale you are!’ Each year finds the proprietress less of a hostess and more of a tyrant. Pity the guest who dares to track sand into her foyer, pity the lackey who chips a teacup or who leaves a crumb on the starched white tablecloths.”

A bizarre and at times challenging read, Hotel Noir is nonetheless an intriguing literary crime novel filled with wonderfully zany characters Agatha Christie would have killed for.