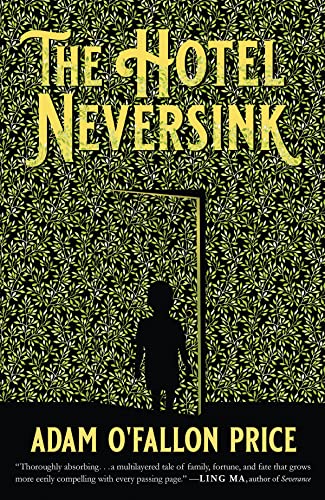 In “The Typology of Detective Fiction,” Tsvetan Todorov demonstrated that the classic Golden Age mystery story was a text about reading and writing narratives.  In his model, the detective and reader join forces to reconstruct the narrative of the murder “written” by the criminal and author, thus establishing the genre’s conservative approach to narration.

It is then in equal parts counterintuitive and inevitable that recent novels of “psychological suspense” such as Gone Girl introduced a taste for a completely antithetical approach to the importance of systematic narration into the mystery genre:multiple unreliable and often deeply unsympathetic narrators. Adam O’Fallon Price’s The Hotel Neversink makes use of this device, by spreading the mystery of a boy’s disappearance from a hotel in the Catskills across 15 narrators and 62 years.

The Hotel Neversink is a remarkably lyrical book, rooted into the evocative time and place that is the mid-20th century Catskills and beyond. The setting is the Hotel Neversink, established by a stubborn immigrant, who fled starvation in Eastern Europe.

The story then chronicles in episodic monologues the hotel’s rise from farmhouse catering to summer guests and Catskill guest house through the narrations, all of them stemming from the disappearance of a young boy during the hotel’s heyday, beginning with the omniscient opening sentences of the prologue, entitled “A History”:

“An article in the Liberty Leader, dated January 8, 1931, announced, in the breathless style of the times, ‘Local Tycoon Dies in Pienniless Despair, Foley House to Be Pawned at Auction.’ The local tycoon was George B. Foley, and Foley House was a symbol of his fortune and misfortune, in equal part. Foley, born an orphan after killing his destitute mother in childbirth, went on to possess one of those uniquely American success stories, both wildly improbable and somehow preordained by his intelligence and cunning.”

Multiple unreliable narrators have arguably been with us since Chaucer—if not earlier. Yet their greatest practitioner, William Faulkner, was a modernist, and most would assert that the literary trope of an unreliable narrator is a product of modernism’s commitment to reproducing experience as subjectivity.

Many others have argued that the boom that murder mysteries, romance novels, and fantasy also enjoyed during modernism’s heyday in the ’20s to ’40s of the 20th century was precisely because they served a literary antidote to the uncertainty engendered by the modernist novel’s emphasis on moral, epistemological and narrative ambiguity—to which the ridiculed Golden Age mystery provided a welcome antitdote—precisely because of its genre.

Critics from the dismissive Edmund Wilson in “Who Cares Who Killed Roger Ackroyd?” to the apologetic fan W. H. Auden in “The Guilty Vicarage,” suggest that mysteries are subliterary texts meant to be consumed rather than appreciated. Even Graham Greene dismissed his classic espionage novels as “entertainments.”

Thus, the current vogue for multiple voices and unreliable narrators, along with plots that create suspense primarily by placing demands on their readers— particularly in term of parsing the narrators’ veracity—rather than manipulating it in terms of their plot.

There have been brilliant achievements using this approach—in particular Iain Pears’ superb Instance of the Fingerpost. However, the exhausting flood of polyvocal novels of “psychological suspense” (or as many of us tend to call them, “Girl” books) can feel like at best writers are abandoning literary endeavor in the hopes of creating a crossover bestseller—at the expense of everything makes a detective story a satisfying and important literary genre. At worst, it feels like authorial laziness, making the reader do the author’s job of creating suspense by structuring the plot.

This is the unhappy shoal upon which The Hotel Neversink founders. The crime is at last solved—or more precisely the solution is arrived at—in a final chapter that is meant to crystallize the ambiguities that haunt all the main characters. Yet the solution is perfunctory and unsatisfying—certainly not worth the work it took to follow the thread of the story by piecing together the voices of the various narrators over the years. The Hotel Neversink is an ambitious, skillfully written book. But it places considerable demands on its reader, which prevented this reviewer from thoroughly engaging with it.