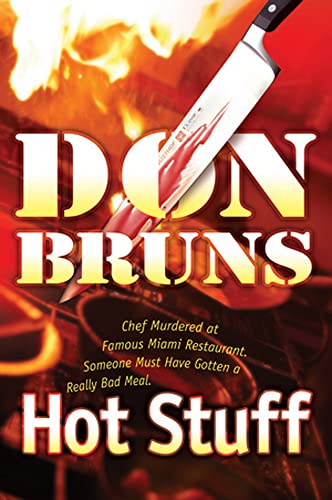 Amanda Wright, an attractive sous chef at the famous restaurant L’Elfe is found murdered, and half of the employees are suspect. The lack of police progress toward solving the murder leads Chef Jean Bouvier to seek a quicker solution.

He wishes to hire PIs James Lessor and Skip Moore from the private detective agency, More or Less, to go undercover and discreetly investigate his restaurant staff.

If Bouvier had done his homework, he would have discovered that Lessor and Moore rarely do discreetly. Still, it’s not all Bouvier’s fault.

Skip’s girlfriend, Emily, has had a hand in it, and she finally tells Skip her brainwave of a solution via a phone conversation:

“Are you sitting down?” Emily said.
I was. Permanently reclined in our broken lounge chair. “Tell me.”
“I’ve convinced him (Bouvier) to interview James for a job.”
“James?” I was stunned.
My partner turned his head, looking at me with raised eyebrows.
“Your roommate’s got a degree in culinary arts, Skip. What better way to use his skills? Go undercover and investigate the murder from the inside. Also, Bouvier knows that James dated Amanda. I filled him in on the relationship.” She paused, letting me soak it in.
“Em, I think it’s a terrible idea. And James never had a relationship with Amanda. It was like two dates.”
“Anyway, Bouvier and his wife think this would be a perfect fit. James can keep his ear to the ground and get a good feel for who might have been responsible. Chef is very interest in the idea.”
“Jean Bouvier doesn’t know James.”
Now James was on his feet, slowly walking to my chair.
“Give him some credit, Skip. You and I work the outside, James works the inside, and we’ll see if we can learn something.”
“And the cops are just going to go along with this?”
“They don’t have to know, Skip. We stay out of their way. This would be an internal investigation.”
“This is crazy. This is something James would come up with, not you. You do know that he’s only had intern experience in a high-class restaurant? I mean, even that didn’t go well.”

After some heated discussions on why they should take on the murder case, the offer of $3,000 a week finally convinces the intrepid duo. Plus, to get closer to any potential suspects, James will get the chance to show off his culinary skills in a more upmarket restaurant than presently while he’s employed at Cap’n Crab. A dream come true for James, but a nightmare for Skip when told that he will be washing dirty dishes while James gets all the glory.

Unfortunately, no sooner have Skip and James accepted the assignment when their investigation turns up far more than they bargained for.

Emily confesses the murder victim and she had been close friends at one point in their lives and had shared a very dark secret. But Emily refuses to elaborate on what exactly that dark secret is, building a wall of defense between herself and the two young detectives.

The more James and Skip investigate the background of the victim and the people she knew, the more they are convinced this shared secret has farreaching implications that may lead to the motive for the murder.

The closer they get to the answer, the more desperate someone is to stop them.

Hot Stuff is the sixth book in the critically-acclaimed Stuff series featuring protagonists Skip Moore and James Lessor, told in the first-person POV by Skip.

Fans of the series know what to expect and will not be disappointed by our down-to-earth investigators’ latest assignment and how they go about solving it in their usual unorthodox way. Those new to the Stuff series are in for a treat. Mister Bruns has once again come up trumps, giving us something to laugh about as the dark days of winter begin closing in.