Horses Where the Answers Should Have Been: New and Selected Poems (Kingsley Tufts Poetry Award) 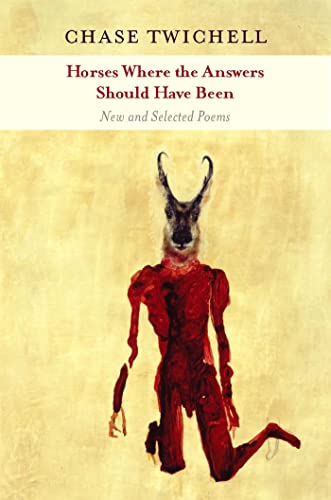 I want my obituary to say that
I wrote in the language of dogs
and not that I sat sprinkling
black letters on a white ladder,
leading my own eye down
one rung at a time
until the dog was gone.
(from “Soul in Space”)

So declares Chase Twichell in this big collection of her poems covering seven books and 30 years of writing. To read a well done “selected poems” is to follow a life, and we find that here as we watch the poet grow from one in love with thought and language to one who quietly yet intensely contemplates the world by leaning toward the essential. Hers is a world of wounded beauty which she confronts and records for us. One of the many subjects of this book is the writing of poetry and what it means to the person and what it does for us all

In the ironic title of a recent poem, “How Zen Ruins Poets,” she reveals the main impetus of her later development as poet and a Buddhist:

Before I knew that mindcould never marry the wordsit loved, in which it lost itself,in which it sang its most secrettender and bitter hymns,I also loved the thrill of thinking.

Words were my altar and my school,” she confesses, and this bias is largely true of her early work till 1995 and The Ghost of Eden. By then she began a long practice of Buddhism at the Zen Mountain Monastery in Mt. Tremper, New York. Not an overnight transformation that Zen practice brings, yet one can sense it immediately in the poems.  She describes this in the rest of that poem:

Then a question arose in me:What language does the mindspeak before thinking, beforethinking gives birth to words?I tried to write without embellishment,To tell no lies while keeping death in mind. To write what was still unthought-about.Stripped to their thinnest selves,words turn transparent, to windowsthrough which I sometimes glimpsewhat’s just beyond them.There, a tiny flash—did you see it?There it is again!

Here is a key to understanding this fine poet and her work generously assembled here.

Clearly fine poems and unforgettable images run through the early books, yet she seems to be struggling most with her sense of self as poet, with her grasping at language and thought to comprehend the world. In some of these poems, theme seems stamped on the poems rather than rising from them. We have the line “Some pain is instructive. Not all pain,” for example, bluntly declared but not quite earned. And in others one feels a self-consciously crafting the poems, too laden with adjectives and adverbs, what she herself terms “embellishments.” The pointing finger gets in the way of the moon.

A fine poem from Northern Spy (1981) is “Nostalgia for the Future” as its full sense emerges through person, place and mood. “A man winds his watch/ in the merciful near-dark./ He lies on a mound of soft grasses,/ this year’s and last year’s,/ in the orchard of scent and wetness.” Here she is a recording consciousness and the focus is clear and direct, as it is in the many later poems of her aging father and mother, and finally herself. Her next book, also from the University of Pittsburgh Press, is The Odds (1986) where we find again such moving poems as “Abandoned House in Late Light” and “Let X.”

In her 1991 Perdido, she continues recording her sense of self in the world, but the subject moves to a focus on love and sexual awareness. Here the emotion pulls her out of herself, as in “O, Miami” where we follow two lovers as they return from their late pier walk:

When he turned the key in the hotel doorI was already stepping out of my sandals.The maid had turned down the bed.Every muscle was a fish. I heard my own voicecry out O Miami, words he took from me.The water-sound was loud in the palmy dark . . .

In The Ghost of Eden collection of 1995, the poet has learned to let go and allow the poem to emerge from the experience. The style is clearer, more precise and whole. In “Little Snowscape” she describes it as “Consciousness ends, says the snow,/ and in the meantime it’s a window/ left open in winter—/ the cold is the same inside and out.” The next poem “The Ruiner of Lives” is a major work, clear and transcendent, as she faces her mortality and achieves that clean and essential Zen style she is known for:

Poor fox, poor mystic,attracted to a light it can’t explain.light that drives away,and leaves us bothhere under the cold,Crumbling leaves of heaven.

Other major contemporary poems are “Touch-me-not” and “The City in the Lilac.”

In her 1998 The Snow Watcher (Copper Canyon Press) she declares, “Poetry is not window-cleaning./ It breaks the glass,” and she does that in poem after poem in a nervy confrontation of life that is Dickinsonian, Emily that is. Her feisty puzzling of life through language is achieved now with Nature, house, and animal images that serve as metaphors.  This book is a true rebirthing as she goes back to her childhood memories to write herself out in such fine poems as “A Last Look Back.”

In Dog Language (2005 Copper Canyon Press) poem after poem awaken us. In “Skeleton,” she quotes Bob Dylan “‘Truth . . . he said, ‘why,/ Truth is just the plain picture,’” and her truths are shared in such window clear poems as “Marijuana,” “Cities of Mind,” and the rhapsodic “Monastery Night,” to name a few, and the whole group of poems dealing with her father’s aging in a nursing home: “Verizon” and “Dog Buscuits.”

Finally we have the New Poems, a superb collection of mature work: memory divings, self probings, nature and stillness meditations, and her working it through to some overall sense of her life and writing. “The Long Bony Faces of the Mules” closes with this understanding of her childhood:

I knew nothing of the fences words makein the mind, or that I would devotethe first half of my life to building themand the second to tearing them down.

What is missing from this ”life work” is not in the poems but in the editor’s failure to suggest anything in the biographical note other than a list of her books, career moves, awards, and yes, noting her husband as novelist Russell Banks. But in a book that charts a life work, some larger sense of the poet’s own life movements should be suggested. It’s a small lament for such a vital gift as this book.