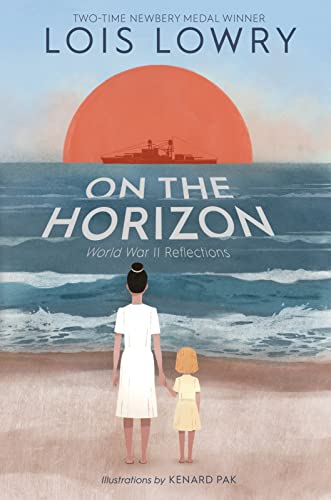 “deserves to be widely read and treasured.”

Lois Lowry, two-time Newbery medalist, has done it again, offering a powerful story in On the Horizon. Written in spare poems, Lowry’s captures her childhood in Hawaii, playing on the beach as Pearl Harbor is attacked: “I was a child who played in the sand/a little shovel in my hand/I pranced and giggled. I was three/The ship sailed past. I didn’t see.”

Page after page lists the men who died—and those who survived—the massive attack on the Pacific fleet by the Japanese on that December morning. The next series of poems portrays the destruction and death caused by the American response—the atomic bombs on Hiroshima and Nagasaki. A new listing of the dead and survivors, many of them children, follows.

This would be an unbearably sad book if the story had ended there, but Lowry’s life took her to Japan after the war, giving her a chance to see the other side of the conflict.

“After the war ended, my dad remained in Japan on the staff of the hospital in Tokyo. Finally, when I was eleven, we joined him there.”

In Japan, Lowry is the outsider. Even worse, she is the enemy, an American. In one of the most striking poems, “The Word for Hate,” she describes meeting a woman when she was out riding her bike one day. The woman touched her blonde hair and said one word. Lowry heard “kirai’ or “hate,” feeling guilty as part of the occupying power. Back at home, the household maids corrected her. The word had been “kirei” or “pretty.” “Such a simple shift of sound!/My mistake was so profound;/When the woman touched my hair/(though I’d pretended not to care),/I’d felt suffused by shame/and guilt. Reproach. And blame.”

It’s a powerful message. We need to listen more carefully, especially to those who are different from us. Lowry goes on to describe watching a boy in the schoolyard, trading a silent look. Years later, the boy, Koichi Seii, moved to America and met Lowry again; “We mused and pondered how/from our horizons we had viewed/a war begin, a war conclude./We were young. We were alike. Boy in a schoolyard. Girl on a bike.”  And that’s the uplifting place where this deeply felt story takes us, to a recognition of what we share in our humanity, across oceans, across wars, beyond language.

The author’s note adds more meaning to a book already densely packed with it. “I guess the important thing is also the simplest: to acknowledge our connectedness on this earth. . . .” Teachers can create entire units of empathy out of this story as a mentor text. This is a book that deserves to be widely read and treasured.