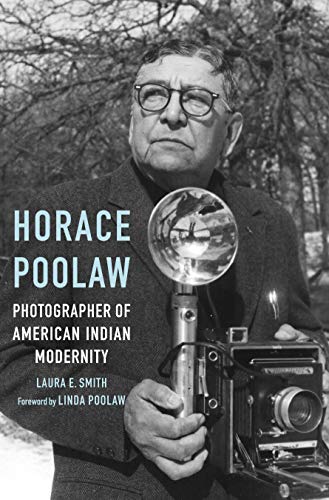 Popular culture’s visual imaginaries of traditional Native Americans tend to exotic representations of a vanished people. We conjure up bloodthirsty braves whooping on the warpath in some long-ago battle, or a proud chief in full regalia stoically confronting the Western settlers usurping his homeland.

Early non-Indian photographers like Edward Curtis also looked through a romantic and nostalgic lens. Curtis liked to depict the lonely Indian on horseback riding off into the sunset of inevitable assimilation, or dancers performing some arcane ritual, clinging to the last vestiges of the old ways, unable to transcend tradition, forever frozen in the past.

On the other hand, Horace Poolaw (1906–1984), one of the first and most prolific professional Native American photographers, portrayed from an insider’s vantage point how the Plains Indians adapted their everyday lives to a period of rapid and profound cultural transition with the advent of white settlers, the division of tribal lands into farm allotments and draconian assimilationist policies.

Horace Poolaw, Photographer of American Indian Modernity by art historian Dr. Laura E. Smith began as a countervision to Curtis, in particular his portrayals of Indian artists who “passively perpetuate the past and never engage their present or future worlds.”

As a corrective, Smith examines the early works of Kiowa photographer Horace Poolaw from 1925 to 1945 in order to show how this Oklahoma tribe actively contested their past and present identities. In the process, Smith exposes the false dichotomy between tradition and modernity, opting instead to view modernity in a diffuse and fluid format wherein conceptions of selves and societies are seen as fundamentally relational and constantly in flux.

At the same time, Smith challenges the gendered and racial exclusiveness of Western art historians’ elitist conceptions of photography as art and what constitutes fine art, which tend to restrict “modernism” to the Anglo-American world. Instead, she expands the notion to encompass indigenous beliefs and traditions to show how the Kiowa negotiated old and new media, technologies, life-styles and worldviews in an ever-evolving cultural context.

The book “presents modernism as an ongoing process by which artists construct and transform their works to respond to contemporary needs and desires. In this sense, modernism is not tied to the Western world or to the nineteenth or twentieth centuries.”

Through this lens, Poolaw’s photos, which are mainly of his family, friends, and local community constructing new cultural adaptations, can be seen as identity politics in action, reflecting the blurred lines between the creative arts and daily life.

Born on the family homestead in Mountain View, Oklahoma, one year before statehood and only six years after the federal allotment policy ended the reservation period, Horace Poolaw was in a prime position as a participant observer to record the trauma of forced transition from nomadic tribe to sedentary farmers, from tipis to frame houses, from horses to automobiles.

Though largely self-taught, Poolaw apprenticed himself to two local photographers in his early teens. When they left, they gave him their cameras and he spent the next 50 years taking photos of what he knew and loved, right in his own backyard.

In contrast to the nostalgic images of traditional Indians clinging to past glories or depictions of “modern” urban Indians lying drunk in the gutter, Poolaw showed his Kiowa contemporaries confronting the present head-on.

Transcending what had become the normal “before and after” assimilationist representations, such as of children attending Indian residential schools, Poolaw shows young Kiowa girls dressed as flappers and a mother and daughter are posed side-by-side in traditional clothes, but the daughter has bobbed her hair.

Warbonneted chiefs ride proudly in Lincolns, and young people lean casually on their cars, which had become the modern symbol of mechanized mobility and the transition from an Indian to a modern world.

Like cars, guns are shown as a reassertion of Indian male authority. In a rare self-portrait, WW II aerial photographer Poolaw poses with a friend inside an aircraft on a Florida air base. Both are wearing military uniforms and warbonnets. Both are holding weapons ready to shoot—one a camera, the other a machine gun.

“The context of the sleek, steel airplane and the U.S. army uniforms historically positions the men as modern soldiers yet within a linear and technologically progressive sense of time, the feather warbonnet signifies the past and Indians. Between these dynamic juxtapositions and seeming contradictions, the picture is unified by the equation of men shooting pictures to men shooting guns. This puts the camera in a position to be seen and read as a weapon.”

Even Poolaw’s photographs of Indians in traditional attire and poses make political statements. He shows increased beadwork on articles of clothing as a re-affirmation of family and cultural self-images in the wake of massive social disruption. Indian performers at pageants seem to be enjoying the re-enactment of their stereotypical selves embellished by the photographer’s subtle subversion.

“The image presents an ironic disjunction between the Indian of the American popular imagination, the roles the actors played in the Wild West shows or films, and their own lived and historical experience. Thus, an assortment of Indian identities vies for center stage.”

Though Pooolaw earned some income from his photography, he farmed, raised livestock, and took other jobs to support his family and fund his passion for documenting his community. His goal was never self-aggrandizement; however, when he sold his photos and postcards at fairs and community events, he sometimes stamped the reverse: “A Poolaw Photo: Pictures by an Indian. Horace M. Poolaw, Anadarko, Oklahoma.”

Throughout his career, Horace Poolaw was driven by one over-riding goal: “I don’t want to be remembered through my pictures; I want my people to remember themselves.”

In sum, Horace Poolaw: Photographer of American Indian Identity is a fascinating profile of the life and times of a photographer whose work has been largely overlooked by mainstream art and photographic historians. Author Smith shows us how not only did Poolaw do great service to his people by placing them at the center of the story, but also she reminds us that culture and identity are unfixed, plural, and perpetually in flux.

In so doing, Smith makes a convincing argument that Poolaw’s body of work is far from being the mundane portfolio of the Indian equivalent of a society photographer. Rather, it reflects a conscious effort by Poolaw to understand and communicate a shifting Native American identity, helping to erase stereotypical popular misrepresentations of Anglo-Native American power relations. No Lone Ranger and Tonto in these proud pictures.

There are 85 photographs in the book and critical deconstruction requires reproduction in sufficient detail and contrast for the reader to interact with the analysis. Most of the individual portraits are adequate in this respect, but the group scenes, posters, and landscape details are sometimes too fuzzy to follow the analyst’s eye.

Lastly, while Smith unravels a compelling life story in terms of the spirit and purpose of Poolaw’s work, the man himself remains strangely elusive. Perhaps, like art, the photographer should be overheard not heard?