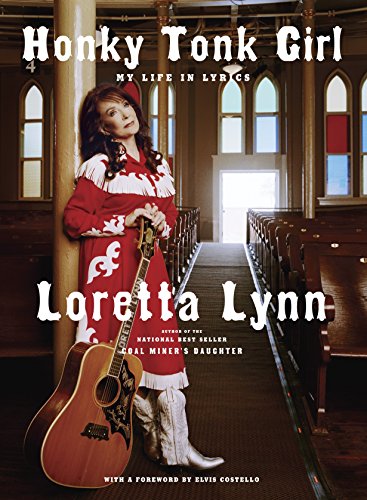 “Loretta Lynn tells us her secrets in the pages of Honky Tonk Girl.”

So Loretta Lynn sums up her skill as a songwriter, making it all seem very simple. And yet, as her new book suggests in its publication of the lyrics from the many, many songs she has added to American country music, nothing could be further from the truth.

Instead, Honky Tonk Girl, in presenting the lyrics, the great pictures, and moving memories that together knit up the tapestry of her life, stands testament to both that life and to the career of a great artist.

As Elvis Costello writes in the book’s foreword:

“Loretta produces a concertina file in which you might keep receipts or invoices. On it is a label that reads SONGS, Foolscap, legal yellow pad, telephone message pad paper, and not scribbled on the backs of receipts all tumble out onto the table.

“There are so many titles and opening lines that it is hard to know where to start . . .

“I pick up a piece of cardboard and realize that I am not staring at an unfinished or unreleased song but a first draft of one of Loretta’s biggest hits—I want to say it was ‘You Ain’t Woman Enough,’ but my memory might be deceiving me. But it really was a song that was famous.

“I said, ‘Shouldn’t this be in the Country Music Hall of Fame?’

“Loretta laughed at the idea and turned the piece of cardboard over. It had been torn off the packing from an item of underwear and must have been all that was available when inspiration struck. Thank goodness for that cardboard.

“’Oh, I see,’ I said, slightly embarrassed at the intrusion. ‘I suppose then they’d know all your secrets.’”

Loretta Lynn tells us her secrets in the pages of Honky Tonk Girl. Having already told her life story in the memoir Coal Miner’s Daughter, here Ms. Lynn concentrates on her body of work and the many songs, from “You’re Lookin’ at Country” (“I’m about as old-fashioned as I can be and I hope you’re likin’ what you see/’Cause if you’re looking at me you’re lookin’ at country”) to her musical threat to the “other woman,” “You Ain’t Woman Enough,” (about which she writes, “I gave birth to this song, and I felt every little bit of the pain in these lyrics.”) to “What Kind of Girl Do You Think I Am,” which was banned by some radio stations unheard because of its suggestive title.

As with Dolly Parton, it is sometimes too easy with Loretta Lynn to get caught up in her outsized stage persona and her long history as an entertainer, as a result forgetting the huge contributions she has made as a songwriter as well. That is until you come up against a lyric like this from her song “When Lonely Hits Your Heart:”

“The same old thing goes on and on it’s more than I can stand
To him its just don’t matter but it’s tearing me apart
That’s how it is when lonely hits your heart.”

Honky Tonk Girl gives us the full story of Ms. Lynn’s career as a songwriter from her earliest days (“I came to Nashville looking like Annie Oakley’s long lost sister!”) to present day. Her songs follow suit, ranging from 1959 and the rather ironically named The Story of My Life (a rather immense title from one so young, who was just starting out on such a long and successful career) to those gathered together for the 2005 multiple-Grammy–winning Van Lear Rose, and beyond (Ms. Lynn also includes lyrics for some songs as yet unrecorded and unreleased).

Among these is one that was apparently recorded for Van Lear Rose that was cut from the record at the last minute. What the thinking was behind its removal amazes and appalls. Called “Just to Have You Back,” the song tells of the loss of Ms. Lynn’s husband, Doolittle, and of her life since his death:

In her notes introducing this song, Loretta Lynn promises that “One day I’m gonna release this song. I love it so much.”

Please do, Loretta. Please release it and many, many more.