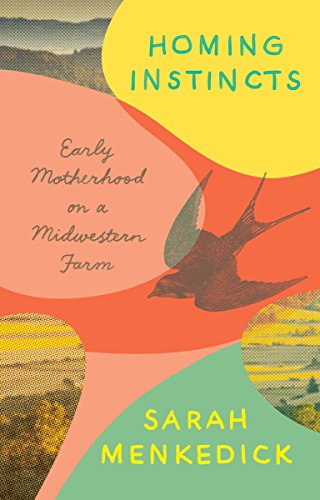 “beautifully written narrative. . . . Menkedick is a writer to watch.”

This debut breaks any existing stereotype of memoir about pregnancy and motherhood. The eight long essays are meandering, smart, and packed with cultural, literary, and scientific references. It is a long trek through the mind of the author, whose stunning intellect is matched by her initial resistance to the insights she eventually gains. Readers get to wade through her stubbornness, how enamored she has been with her previous lifestyle—traveling the world, going to China on a whim, being unfettered—and then experience her agitation with the realities of pregnancy and motherhood—a trip from which there is no return.

First, the news that she and her husband will have a baby strikes her like any decision she makes to do something impulsive. This is just travel of a different kind! She’s briefly elated.

“I spend the first two weeks like this . . . unable to do anything but feel that tingly marvel of news. It is like being in a luminous tunnel, bedazzlement and hypnotic hum, free of time and space. And then I fall out the other side of it, and the architecture of my life collapses.”

Menkedick tells us she goes into a deep depression. She looks longingly back on a few months prior, when she and her husband Jorge “lobbed life options around like badminton birdies . . .” She says, “Without the opportunity and desire to leap into the wider world at a moment’s notice, I don’t know who I am . . .”

This panic, and temporary loss of identity is what leads her to some of this book’s wisdom:

“How much of myself is a core self, and how much is a reflection of the circumstances in which I choose to place myself . . . ? How much of me is flimsy construction, how much bedrock?”

Menkedick admits to having “confused travel with experience and experience with self-definition.” This realization has a gestation period as long as that of her child. The author begins to glean that the most significant thing to happen to her yet will not involve pursuit of the exotic, but will be grounded in the domestic, and rest upon the history of so many women before her—pregnancy, labor, childbirth, and the ensuing self-erasure of new motherhood.

These realizations are the high points of this beautifully written narrative. For example, Menkedick becomes outraged to learn that a group of midwives who she respects oppose her own stance in the controversy around vaccinations; she plans on vaccinating her child. But Menkedick wonders what it means to have a stance, and where her righteousness will take her. She says, “All that I am left with is my own arrogance.”

These admissions of inexperience, error, righteousness, arrogance, and flimsy construction of self, make her trustworthy as a writer, and endear her to the reader. There is nothing more essential to memoir than the writer’s willingness to be self-convicting.

To her credit, she gets how myopic she’s been: “I couldn’t understand until I became a mother. I so completely inhabited my own story that I failed to see its construction, its ultimate flimsiness—the way I had cut myself out of it like a chain of paper dolls, so many one-dimensional selves holding hands into infinity.” Readers will admire Menkedick’s self-scrutiny and candor.

The more the author lets go of ego, the more she begins to understand the power of simplicity and the calm of a broader perspective: “I go nowhere, and yet, in going nowhere I am in a way I cannot be when I impose myself on the world. As the winter tips into spring and spring brightens into early summer, the world comes into relief: immediate, overwhelming, and unmediated. Instead of me, there is the morning porch, the coreopsis making their slow revolution with the sun, the driveway under a starry cosmos of maples, a dog with a fly on her nose, June’s orange-cream evenings fizzling into night. The bare bones of life, unadorned with expectation or seeking, only ever right now.”

A lovely excerpt from A Wilderness of Waiting, a favorite chapter:

“The biggest surprise of pregnancy . . . [is the] revelation that in the monotony lies a kind of release. Waiting has become an art, a state of suspended grace, an alternate way of living . . . For the first time in my life, I understand the concept of home. Home is . . . a giving in, an acceptance, the place where I finally strip life of all its décor of aspiration and regret . . . It is the space in which I forgo both anticipation and nostalgia . . .”

Chapters about her grandmother and her father are the most generous in terms of development of other characters. (Readers don’t really get to know her husband Jorge; perhaps there could’ve been a chapter devoted to him.) Menkedick’s portrayal of her father in the final chapter, The Lake, is specific, gorgeous, and poignant. Readers will fall in love with this dad, and it’s a credit to the writer that we see him in so much detail, that we come to know him.

For someone clearly as smart and as talented as Menkedick, it’s surprising to see her create nouns out of adjectives by adding the suffix “-ness.” Why say “gratefulness” when gratitude is the noun? Or “quietness” when the noun is simply quiet. In another example, she talks about the “worthwhileness” of something. This misuse of language is so pervasive now that it won’t likely strike other readers as odd. But it stands out against her otherwise brilliant prose.

Still, Menkedick redeems herself with some of the most gloriously original descriptions: a full moon that has the “sandy color and regal fatigue of an old lion;” beaches that are “slivers of toasted almond;” a bird’s nest, “tidy as a ballerina’s bun . . . ;” and her young niece and nephew, who “consume time . . . the way they gulp lemonade.”

And I doubt there’s a better, more accurate description anywhere than the one on page 171, of a woman’s experience of early labor vs. hard labor. Menkedick is a writer to watch.