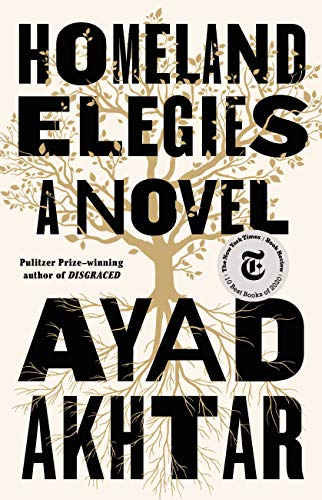 “To find meaning and humanity in confusing times and to convey that understanding to the reader is the ultimate gift a writer can provide.”

Ayad Akhtar’s novel Homeland Elegies demonstrates that the personal is political. Akhtar shows not only how being Muslim affects his way of being in the world but how religion and ethnicity influence individuals, families, and countries.

At a time when the very nature of truth is disputed, the book fittingly mixes memoir and novel. In a 9/14/20 New Yorker profile by Alexandra Schwartz, Akhtar declined to say what was real and what wasn’t in Homeland Elegies.

This strategy of combining the fictional and the real, also used in Michael Chabon’s recent Moonglow, here illuminates more than the story of one writer and his family. Akhtar’s larger subject is our troubled new century. He expands the novel’s form to get closer to the truth.

The first half of the book is particularly compelling. In this part, Akhtar anchors debates about responsibility, faith, and justice in the complex milieu of his family, both in the United States and the land of his parents’ birth, Pakistan. Sociopolitical currents affect and are affected by the interactions of the members of one extended family as well as some key friends.

Islam is as varied as its practitioners. The book presents Muslim people who vary from extremely secular to extremely observant, sometimes within a single person in the course of a lifetime.

A trenchant conversation between Akhtar and an uncle in Pakistan illuminates the differences between the experiences of the family members who stayed in Pakistan and those who moved to the United States. Interesting analysis is also provided of the history and family of the Prophet Mohammed as well as the history of Pakistan and of Afghanistan.

That conversation occurs in a rich family milieu. Akhtar pauses to describe the food they are eating and the interruptions of his parents, who repeatedly urge him to cut off the conversation in the name of peace. By contrast, some conversations in the middle of the book—about hedge funds, about Robert Bork—lack much context and seem like isolated lectures. The speech about astrology given by a romantic interest is tiresome, which is ironic since it is delivered by an educated lawyer.

In such moments, the dramatist Akhtar seems to have left the novelistic realm to provide speeches resembling monologues in a play. That is tied to a larger difficulty. A few sections in the middle of the novel lose the narrative thread to become separate stories connected only by the consciousness of the protagonist/narrator/author.

In the last third of the book, though, Akhtar returns to the subject of his family and sees larger social issues through the lens of the people he knows best. This section includes a beautifully dramatized courtroom scene, complete with stage directions. Thus Akhtar fulfills the ambition of this book: to analyze 21st century American culture while dramatizing the life of a sensitive participant and observer of it.

Born in Staten Island, bred in Milwaukee, Akhtar would seem American by birthright. Yet the tension with the Pakistani past and present, and the prejudice he experiences in the United States, make his sense of being an exile in his own country difficult to escape.

Akhtar’s awareness that he is seen as “other” because of his skin color and religion is especially fraught in the immediate aftermath of 9/11. Describing to his love interest how he was harassed for being Muslim while trying to donate blood in New York City, he reflects on “the terrible isolated sadness of it all, . . . our repulsive condition, at once suspects and victims when it came to this, among the great American tragedies.”

Like Melville in Moby-Dick, Akhtar’s principal subjects include the roles of faith and capitalism in American culture. Like Shakespeare, in the chapter “Pox Americana” Akhtar conjoins comedy and tragedy, as he literally fumbles a very personal issue as his mother is dying.

Nonetheless, his last conversation with his mother is extraordinarily touching. Here Akhtar reveals the universal longing for love and the difficult necessity of communicating love through language: “I saw now that the source of my life’s work—reading, literature, writing—was in part the pursuit of something as simple as my mother’s gaze. . . .” To find meaning and humanity in confusing times and to convey that understanding to the reader is the ultimate gift a writer can provide.