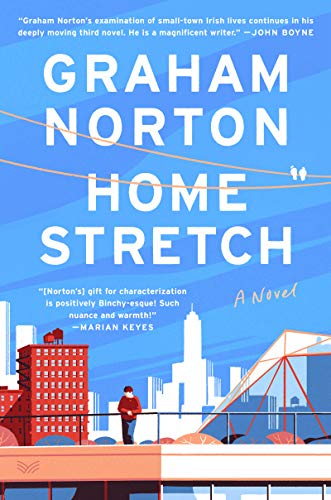 “Graham Norton is a masterful storyteller. The layered crafting of Home Stretch is rife with pithy innuendo and story-driving personality. His sharp eye captures the nuance of small-town Ireland in the process of evolution as he unfurls this interconnected story with spellbinding verve and finesse.”

Home Stretch by Graham Norton is a vibrantly written, delightful story with coming-of-age elements operating within a family saga’s network that begins in small-town Ireland, travels to New York, spans 32 years, and sweeps back to where it started.

It is 1987 Ireland, and Dan and Chrissie Hayes own a local pub in Mullinmore, not far from Cork City. As the tight-knit community prepares for the wedding of two young locals, 22-year-old Connor Hayes agrees to join the bride, groom, and three others on a trip to the beach the day before the wedding.

Tragedy strikes on Barry’s roundabout when the car flips on the way home and three of the six youths are killed. In a community whose citizens live like threads in a fabric, Mullinmore is blindsided, and when word spreads that Connor Hayes was driving, the stage is set for this intricately entwined story involving the ramifications of that fateful car crash.

Connor’s parents arrange for Connor to take a construction job in Liverpool, thinking the day will come when Connor’s presence doesn’t serve as constant reminder of the town’s tragedy, that one day it will be safe for Connor to come back, but Connor’s motivation is influenced by Ireland’s cultural mores and his return to Mullinmore is a decades-long journey.

The fully realized characters in this cause-and-effect story are written sympathetically; the drama that unfolds is due to the times. Connor is a young man grappling with identity issues, and as he comes to terms with his sexuality, he fears bringing shame to his family and cuts all ties with his past, including communication with his parents and sister.

Leaving Liverpool for London without telling his family, Connor settles in and finds a new family. He thinks in hindsight, “If he hadn’t been forced to run away, who knows how long it would have taken to become this man?” His confidence builds, and he wonders, “Had this life that he was now living been available to him all along?”

Connor’s elder sister, Ellen, wants to distance herself from her family’s stigma, and doesn’t suspect the attentions of Martin Coulter are divisive. The son of the Mullinmore’ s doctor, Martin Coulter is connected to Connor as one of the survivors of the car crash, and when he marries Ellen Hayes, the marriage swiftly becomes unhappy. “The change was so abrupt, she doubted herself. The young bride wondered what she had done wrong. What had changed?” In time, Martin follows in his father’s professional footsteps and two children come along, but “Marriage, it seemed to Ellen, wasn’t about being happy or making someone happy. It turned out it was just a matter of deciding whose unhappiness was easiest to deal with. It was hers.”

In London, Connor crosses paths with an international businessman named Tim and moves with him to America. The years transpire, Connor is 44 in the year 2012, and a twist of fate comes in New York City when “Two Irish men walked into a bar.”

Finbarr Coulter is newly arrived in New York from Ireland. Twenty-two, he lands a bartending job and on his first week of employment, when Connor walks in to drown the sorrows of his 16-year relationship ending, it comes to uncanny light after a few too many that the two are related. Connor wonders, “What version of the story did Finbarr know? He knew he was afraid—but of what precisely? He felt he could bear hearing about the town still blaming him for what had happened,” but “what terrified him was the idea of discovering that everyone had simply forgotten him and gone on with their lives.”

A trajectory begins that leads Connor home to Ireland, and wheels are set in motion to repair the past. The Irish culture has changed, and with it the minds of Mullimore’s locals, and the truth behind the car crash 32 years before brings all characters in the story to alignment.

Author Graham Norton is a masterful storyteller. The layered crafting of Home Stretch is rife with pithy innuendo and story-driving personality. His sharp eye captures the nuance of small-town Ireland in the process of evolution as he unfurls this interconnected story with spellbinding verve and finesse.