At Home in the Dark 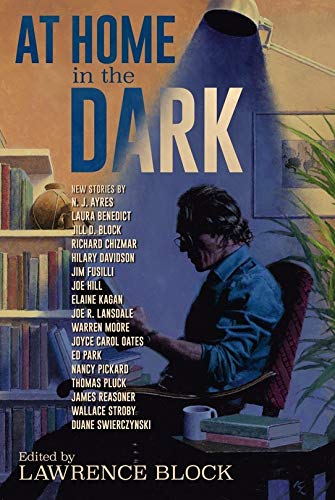 “Serious stories, taking in the main a hard line on reality, and any gray scale would show them on the dark end of the spectrum.”

When mystery author extraordinaire Lawrence Block gathers stories for an anthology, top names mingle with newcomers among the authors he taps on the shoulder. His own mysteries have dipped deeply into the classic New York City and Los Angeles dark police procedurals, but also skated and danced with merriment at times. Obviously, its the darkness that Block wants for At Home in the Dark—starting with a chatty Foreword that reviews the history of “noir” and explains why he’s avoided that term in his title.

But you can’t avoid the genre, since each story here features some aspect of the unsettling, creepy, menacing, and lock-the-door disturbing. There are 17, and it’s worth grabbing this collection just for the sake of reading another mystery by Joyce Carol Oates. But Joe R. Lansdale, Nancy Pickard, Jim Fusilli, and Duane Swierczynski will also draw fans. And part of the fun (if being alternately scared and despairing is fun!) is the contrast among their styles, as well as the surprises in the directions each one chooses.

But then there’s Elaine Kagan’s story “Hot Pants,” which launches this collection. It opens in a nursing home where everyone’s losing whatever marbles they entered with, yet it’s where Lucinda Conte needs to keep her failing father housed and cared for. Grim motivation for working in an Italian restaurant with good tips . . . and a kitchen culture straight out of the #MeToo nightmares. See whether you would have predicted the final sentence, and the way the last action ties back to the title.

What would you guess a story called “The Eve of Infamy” would be about? Hint: Think FDR and his famous speech. Here’s a taste of the story, by Jim Fusilli:

“No, he decided, knee-deep in debris. He’d wait out the war and go back to the Bronx. The streets were in his blood. He knew the rooftops and alleyways. Theft came naturally, violence did too. If the next few years broke his way, he could bankroll a future, playing steady amid the turmoil. Then he’d go back home a champion. He’d aim high. The cops wouldn’t dare touch him.”

In other words, don’t look for happy endings in this collection. A few “just desserts” maybe, but even those are grim. Block’s roundup proves that The Girl with the Dragon Tattoo wasn’t unusual, just longer than usual for this genre. Brace for violence, sexual and otherwise. Don’t read this if you’re on the brink of depression, as it might tip you in. But if you’re a survivor of many a dark crime novel, there’s great pleasure in these concise, tight, and twisted tales.

One of the most enjoyable aspects of At Home in the Dark is seeing the collection as insight into Lawrence Block’s preferences, amply described in his “rant” at the opening. His description of the noir collections in vogue is spot on: “They are serious stories, taking in the main a hard line on reality, and any gray scale would show them on the dark end of the spectrum.”

Here’s one more classic snippet to treasure from the collection, from the story “The Cucuzza Curse” by Thomas Pluck: “Joey was here because he knew people, and he knew people. . . . He had a reputation as a reasonable if foppish good earner with an even temper, respected by men of violence.”

Don’t say you didn’t know what you were getting into: the dark!