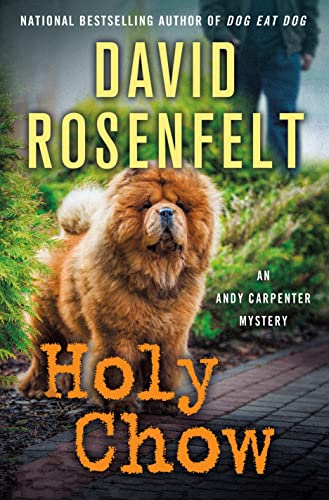 “You can read Holy Chow for the mystery, for the snappy writing, for the engaging characters. The main thing is to read it!”

David Rosenfelt provides the most important ingredient in any good mystery : a detective with personality. Hercule Poirot better watch out! Andy Carpenter has one of the most engaging voices you’ll find in this genre. Early in the book, we get this description as Andy heads to a meeting where a will is to be read, a classic setting for a mystery, here given a Carpenteresque turn:

“Bernie’s firm’s offices feel sterile and, well, boring. I’m a criminal attorney, and even though I try to avoid work, when I do take on a case, I grudgingly find it interesting; it engages me. If I did something boring like estate law, then . . . it doesn’t matter, because I would never do estate law. These offices look like they house people who do estate law.”

As this passage suggests, Andy is about to get involved in a case, much as he would prefer snacking to sleuthing. When Lion, a big chow, gets adopted from Andy’s shelter, it turns out not to be the solution to a problem (a dog needing a home), but the beginning of one (its master getting murdered). Andy not only has to take care of Lion again, but he ends up promising to defend the man accused of killing the dog’s new owner.

The case is full of twists and turns as Andy looks for the real motive and the real killer. Luckily he has a whole team to help him, a colorful group of mostly 80 year olds. As Andy himself would say, “What’s not to love?” There are interesting characters, their personalities developed in fast-moving chapters that keep the pages turning.

The dialogue is witty and funny, reminiscent of classic Capra movies. One can almost hear Katherine Hepburn and Spencer Tracy speaking these lines. When Andy goes to a meeting with the prosecuting attorney, she offers a plea deal (which isn’t much of a deal). The encounter ends like this:

“’It was nice meeting you, Andy. I guess the next time we’ll meet will probably be in court?’

‘I’ll be wearing my dress sneakers.’

She offers her hand and I shake it. ‘I had heard that you were retired.’

‘I heard the same thing,’ I say wistfully. ‘Someday it might even be true.’”

You can read Holy Chow for the mystery, for the snappy writing, for the engaging characters. The main thing is to read it!