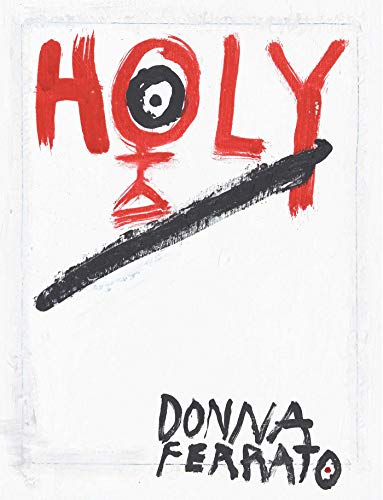 Documentary photographer Donna Ferrato has been photographing women for at least 50 years, but Holy, her latest book, might just be her most personal one since the award-winning Living with the Enemy, and Love and Lust and Amore. Not because it uses what looks like handwritten font to add notations and musings to the photos, as one would in a personal journal. She has done that before. And not because it is about women, and about the tension between love, sex, and violence that is inherent to patriarchal societies, possibly the subject of her most passionate and rule-changing work.

It is personal because of the ferocity with which Ferrato puts herself (and the women in her closest circles) on every page, engaging with the violence, the heartbreak, the injustice, the sex, the misogyny, the predation, the commodifying of women, even as she also engages with the beauty, the freedom, the anger, the tears, and the transgressive visceral nature of women dancing with the myriad levels and expressions of oppression that appear to (still) be (largely) their lot.

Even Holy, the title, she intends as a form of resistance, writing: “This book is built on the strength of that other holy trinity—the mother, the daughter, and the others who believe in women. Am I worried? Sad? Yes—and very, very angry. The fundamental disrespect for women’s rights should be an affront to everyone. It doesn’t matter when a woman chooses to bear life, or whether she does at all. It matters that she feels safe and supported in her decision. It matters that the system shamefully ignores the complexity of women’s health care. That it allows for rape, incest, kidnapping, and domestic violence—that many cannot make a living because society undervalues their contributions. There has to be another way.”

Her anger is on every one of the roughly 140 black and white photos, contrasted, stark, as if lit from within, most inky black, grainy, diffuse, the white a bulb on the thoughts Ferrato has scribbled for context, for release, a vent to the anger she confesses, then lays at the feet of the reader to do what she will.

But what is it like, this book? It is an emotional experience. For some, a triggering one. For others, a thrilling moment of understanding, of validation. For all, a call to figurative arms.

It opens with a two-page spread of Ferrato, a nude self-portrait from 1981 titled, “Looking for the Light: In Utero.” The light hides her face.

Another shows a young black woman, downcast, multiple tear paths on her cheeks, and reads:

“Janice, Boulder Colorado, 1984. Her best friend, Kim, was stabbed to death at a bus stop in front of the children and many bystanders. Janice testified against Kim’s husband. “The court went easy on Gabriel. He was released in less than four years for good behavior.”

Another shows a woman with two black eyes staring at the camera, unflinching. It’s Rita, the first battered woman on the cover of a national publication (The Philadelphia Enquirer) and the cover of Ferrato’s groundbreaking Living with the Enemy.

There are photos of young women sitting in jail for killing boyfriends, a mother broken over the rape of her girl by a school bus driver, a Salvadoran girl holding the picture of her mom, sentenced to 30 years in a maximum security jail over an abortion ruled a homicide. The jail did not care that she was the sole provider for four children. Ferrato adds “The father provided nada for his sperm” but lets us know the woman achieved early release after the photo of her daughter was published worldwide.

In another photo, Ferrato’s dad lies on top of a picnic table at the far end of a green lawn. He is dressed smartly, staring at her mother who is much closer to the camera. Her mom is beautiful, elegant in her pearls above a (white?) dress that outlines her slender figure. Ferrato writes,

“Marriage is no picnic, Virginia, 1987. Dad was incorrigible. His lies brought him down. Mom helped him even against my advice. I loved them but I had no influence over their relationship. All I could do was watch.”

But Holy is not all gloom. There are photos of friendship. Of activism. There are tributes to Ferrato’s own mother and grandmother, as well as shared memories of the male/female relationships that formed her worldview.

She includes women who made changes that helped them escape the cycle of violence that targets them and their daughters.

There are breasts and vaginas of all colors belonging to cisgender, trans, and nonbinary women and girls. None belong to a model or a celebrity.

A photo shows an elderly toothless woman smiling wide, a pride parade of sorts behind her. The caption: “Pride, NY, NY, 1995. Glory to the crone.”

There is a soldier pointing her gun, and soon after an image of Annie Sprinkles, who Ferrato identifies as a “post-porn modernist,” performing a cleansing ceremony on herself, and there are men screaming, beating, stomping, being arrested, and children crying, and children hollowed, staring blankly at nothing.

Yes, there is a lot of rightful, documented anger in Holy. But also a hopeful defiance that the organic nature of women will save them. That sentiment perhaps best shown through the image of a topless young woman in space buns and oversized wide-leg jeans who has painted on her torso the words, STILL NOT ASKING FOR IT. She looks straight at the camera looking brave and afraid. But there she stands . . . and poses.