Hollywood Ending: Harvey Weinstein and the Culture of Silence 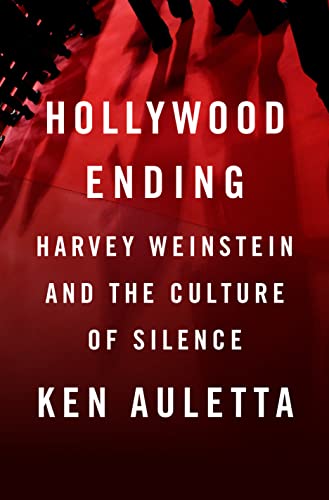 “A thoughtful, revealing book about a horrid man and serial predator who produced some fine movies.”

“He was more than a monster,” writes Ken Auletta in Hollywood Ending, his biography of convicted sex offender and former film producer Harvey Weinstein (b. 1952). He was also “a genius and an asshole,” says one of hundreds of former associates quoted here.

Weinstein, of course, was a founder of Miramax, the entertainment company that produced The Crying Game, Pulp Fiction, Shakespeare in Love, and other independent movies. An Academy Award winner and one of Hollywood’s most powerful men, he was sentenced in 2020 to 23 years in prison, accused of sexual harassment or rape by more than 80 women, including aspiring actresses, models, and staffers.

Auletta begins his story in Flushing, Queens, where Harvey and his younger brother Bob grew up, the sons of Max, a diamond cutter, and his wife Miriam, a domineering figure who “constantly berated” Harvey over grades, his eating habits, and his weight.

She would scream, “Harvey, do you really need to eat that bagel? You’re fat. Don’t eat that!” in front of his friends. She would open a window of their apartment and shout so the entire neighborhood could hear it: “Did you brush your teeth and wash your face?”

That kind of shaming, combined with life in a turbulent household filled with bickering and nastiness, helped shape the man Harvey became, writes Auletta.

“The years of public and private shaming left scars, though Harvey would eventually try to turn his resentment of Miriam’s fastidiousness into a banner of outsider cred in an industry that was reverential about personal grooming and unforgiving about excess weight.”

Later, Harvey was “cunning, brash, loud, and volatile, often screaming at those who worked with him,” says Auletta. He was also unkempt and spat food as he yelled at people over a meal.

As for Harvey’s rapacious “subjugation” (not seduction) of women, Auletta wisely does not speculate. Many specialists have told him not enough is known about sexual predators to explain fully their behavior.

Auletta describes Harvey’s entire show business career, beginning with his days as a rock music promoter in Buffalo, NY, in the 1970s, after graduating from the state university there, right through his many years of work with brother Bob at various iterations of the immensely successful Miramax, which was owned by Disney for a time and eventually became the Weinstein Company.

By the early 1990s, Miramax was a leading independent moviemaker. Harvey demonstrated an uncanny knack for making quality movies, working with a nerd-like passion for the medium that began in his youth. As one source tells Auletta, “He had a safecracker’s feel for films.”

His first sexual assaults occurred in the Buffalo years. With his increasing success in the ’90s, his abuse of women “escalated,” says Auletta.

The “dizzying” charges of rape and assault against Harvey reveal “a man who was constantly, compulsively hunting women. Embarrassed, fearing retribution, perhaps needing to deny what occurred, the women who claimed to be his victims did not notify the police, ever.”

Harvey’s well-known temper tantrums were generally viewed as mere tactics of a “colorful, shrewd character who delivered super films,” writes the author. “His excesses, including threatening violence against competitors to acquire movies at film festivals, were either not widely known or rationalized away by those who admired his films and kept score by whether Harvey’s movies wowed critics and made money.

“Furthermore, rumors of Harvey’s infidelities were not shocking in a film community where pressuring women for sex was not unusual,” he notes. Rape, of course, was “out of the ordinary.”

Things changed in 2015. That is when 22-year-old Ambra Battilana Gutierrez, a Miss Italy finalist, notified police that Harvey had attacked her “like a dog in heat,” running his hands under and up her skirt, and trying to fondle her breasts, when she tried to show him a portfolio of her modeling pictures in his office.

Harvey’s team quickly mounted a campaign to destroy her reputation. Overwhelmed by media attention, Ambra eventually agreed to sign a nondisclosure agreement with Harvey. She received $1 million in return.

But it was too late. Harvey Weinstein’s downfall had begun.

Auletta recounts ensuing exposes of Harvey’s sexual assaults in The New York Times and The New Yorker, accusations of his abuse by innumerable women, and the eight-week trial that led to the movie mogul’s conviction.

There are graphic descriptions of sexual assaults against women—some famous, most not—in Hollywood Ending. They will leave many readers wondering whether Harvey was really much more than a monster, as Auletta claims.

A thoughtful, revealing book about a horrid man and serial predator who produced some fine movies.