The Hollow Places: A Novel 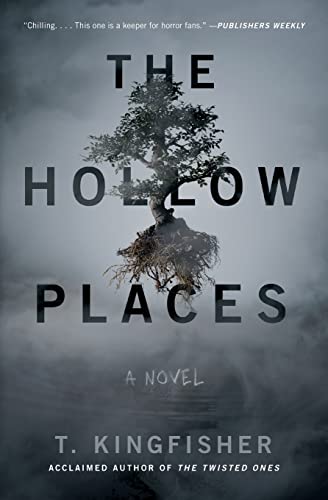 “A supernatural thriller that promises much at the outset but ultimately fails in its execution.”

Kara’s marriage has collapsed, and with few options available she moves into a spare room in a Hog Chapel, North Carolina, into a museum owned and operated by her Uncle Earl. Given a chance to reconnect with childhood memories in a quiet, restorative atmosphere, Kara settles in and begins to put her life back together.

When Uncle Earl requires surgery in Charlotte and an extended recuperative stay at her mother’s place, Kara happily takes over the daily management of the museum. However, a hole suddenly appears in the drywall upstairs, and on the other side of the wall Kara and her friend Simon discover a plane of existence beyond ours that is bizarre, frightening, and very, very dangerous.

The Hollow Places is the latest supernatural thriller from author and illustrator Ursula Vernon, writing here as T. Kingfisher. Vernon is already highly decorated, having won a Hugo Award for her webcomic “Digger,” another Hugo for her novelette The Tomato Thief, and a Nebula Award for her short story “Jackalope Wives.”

At the outset, the first four chapters of The Hollow Places comprise what is perhaps the best opening to a novel you’re likely to encounter this year. The author does an absolutely superb job of introducing her main character to the reader. Kara (“Carrot”) is quirky and amusing, and we’re sympathetic to her situation.

Furthermore, the setting into which Kara moves is perfect for developing her eccentric and rather loveable view of the world. The Glory to God Museum of Natural Wonders, Curiosities, and Taxidermy is a playground for the wistful and whimsical souls among us, a dusty, cluttered labyrinth filled with fake Clovis points, Elvis memorabilia, a portrait of Pope John Paul done entirely in pumpkin seeds, mysterious pods, and an endless assortment of stuffed creatures including an albino raccoon, a giant Amazonian river otter, a wildebeest, and a large elk head.

With more stuff arriving almost every day via UPS, the Wonder Museum seems like a place of infinite possibilities for amusement and adventure.

Unfortunately, plot development seems to be one of Vernon’s shortcomings, and once the hole in the wall is discovered upstairs and the action moves out through the mysterious portal into another dimension, the story devolves into little more than a fan tribute to Algernon Blackwood’s famous horror story “The Willows.”

Vernon explains in her Author’s Note that when she read the story its setting seemed like “an interesting place. Not a good place, but an interesting one.”

However, shifting her own tale into its watery, willow-filled environs immediately drags the pace down to a crawl as Kara and Simon get lost, thrash around, and are creeped out by various elements borrowed directly from Blackwood, with one or two of her own tossed in.

Furthermore, the witty dialogue between Kara and Simon quickly becomes tiresome, as their Ricky-and-Lucy act constantly erodes any suspense or horror that might develop in this place. The black mold joke is somewhat amusing at first, for example, but after the eighth time it’s just very, very tedious.

The author’s plot problems continue after Kara and Simon escape back to their own world and try to resume their daily lives. The willow world continues to exert a powerful influence on them, but the only way that the author can continue to flesh out our understanding of what’s going on back there is through a Bible-cum-diary Kara brings out with her. Kara reads about someone else’s awful time, but the horror is diminished for us because we’re now getting it second-hand instead of directly through her own experiences.

Sending Kara back in to solve the problem would seem like a logical choice, but the whole thing once again becomes soaked in confusion as she thrashes and beats around, gets disoriented, revisits known horrors, and fumbles toward some kind of conclusion. And the less said about the dénouement featuring Woody Morwood, the better.

It feels wrong to offer such negative criticism of a novel that begins so exceptionally well, but The Hollow Places is that kind of a book, a supernatural thriller that promises much at the outset but ultimately fails in its execution.

It seems that Vernon’s talents are much better suited to shorter works of fiction, as reflected in the awards she’s received to date. Beyond that, this novel would have prospered with much more T. Kingfisher and much less Algernon Blackwood.

It’s too bad the author hadn’t made the Wonder Museum the central focus of her story rather than its beginning and ending only. While Blackwood’s willow world may be interesting, the Glory to God Museum of Natural Wonders, Curiosities, and Taxidermy is something else again.