Holding Her Breath: A Novel 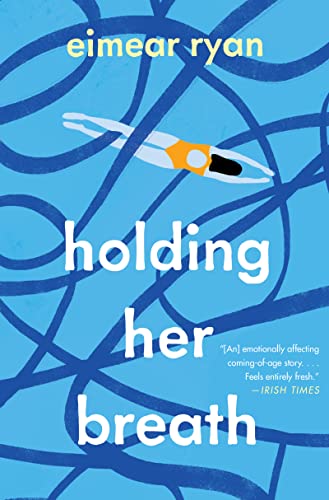 “Holding Her Breath is a generational story written in descriptive language with steady pacing. . . . an engaging, sensitive story set in Ireland, sure to resonate with readers far and wide.”

A compelling look at coming-of-age concerns beneath the taboo of generational mental illness, Eimear Ryan’s debut novel, Holding Her Breath, is the story of a young Irish woman coming into her own by pursuing the buried truth of family secrets.

It is modern day Dublin, and overwhelmed university freshman, Beth Crowe, has mishandled her sports scholarship. Once lauded a natural athlete in swimming, Beth remembers, “At one point in her adolescence, she realized that the adults in the club were describing her in nearly supernatural terms: unreal, savage, unbelievable.” Possessed of the discipline of devoting her youth to “getting up at dawn for training, slipping into the water again after school; her world became narrow but deep. It was only when she stopped, abruptly, that she realized how tired she was.”

After her self-imposed sabbatical, she returns with her own practice out of love for the sport.  Ryan pinpoints Beth’s affinity with water: “It feels illicit somehow, being alone in the water. No coach towering over her at the pool’s edge, saying surely she can do better than that. Now she does as she likes. After a hundred laps she feels calm and rejuvenated, her body pinging with the tremors of exercise.”

Now with a focus on psychology, the taciturn Beth is paired in college housing with the gregarious Sadie, who takes her to a campus book event and introduces her to poet and university professor, Justin Kelleher, a class lecturer on the widely acclaimed poet, Benjamin Crowe, who happens to be Beth’s deceased grandfather.

When a relationship grows between Beth and Justin, Beth is optimistic. She “never thought she could be one of those people to whom things actually happen. Every moment of drama or triumph in her life has taken place in the pool and been rendered less impactful for the hours of repetitive practice that preceded it. She is not used to things happening out of the blue.”

An hour away from campus, Beth’s mother Alice lives with her elderly mother Lydia, the widow of Benjamin Crowe. The fame of Benjamin Crowe is the stuff of legend kept under wraps by Lydia, who won’t part with her husband’s coveted archives, nor reveal what she knows of events leading to his death, a mystery that casts a wide shadow upon Beth and Alice, as well as passionate Crowe scholars.

Because Beth is hesitant to pursue the subject with the formidable Lydia, she asks Justin what he knows of rumor surrounding her grandfather’s death. When Justin mentions a never-published Crowe biography by author Julie Conlon-Hayes, he says, “It’s a story among us Crowe scholars. Now, how much is true, I don’t know. She was friends with your grandparents, so she had great access . . . But then Ben died, and Lydia squashed the project.” Continuing, Justin says, “Because of the nature of his death, we are all the time searching his work for clues and explanations. But perhaps we should consider the poems simply on their own merit.”

When Beth asks her mother what she knows of her famous father’s death, Alice skirts the issue of mental illness. “I was told Dad had an illness that made him confused, which in turn made him fall into the sea. I didn’t connect the dots.” On the tight-lipped comportment of Lydia, Alice says, “Her intent was to preserve, as she called it, the honor of the family. She didn’t want anyone poking around in Dad’s memory, and she never spoke publicly about his death.”

Sensing that the mystery at the center of her family lineage would help Beth better understand herself, Beth visits Sadie at her family’s rural home in Portlaoise, and the girls set out on an adventure to visit the elderly Julie Conlon-Hayes at her home in West Cork, in hopes of learning her side of the story concerning the events that led to Benjamin Crowe’s death, which took place in the area.

Stopping cliffside along the road to Julie Conlon-Hayes’ home, Beth “closes her eyes and tries to put herself in her grandfather’s place over thirty years ago. She pictures him barefoot, his toes gripping the earthy edge of the cliff. Crouching, tucking his chin to his chest, pointing his palms to the water. Except it couldn’t have happened like that.”

Holding Her Breath is a generational story written in descriptive language with steady pacing. Author Eimear Ryan captures youth’s perseverance in the search for one’s place in the world, and weaves in mental illness’s nuances while unravelling long guarded family secrets. It’s an engaging, sensitive story set in Ireland, sure to resonate with readers far and wide.