Hold Fast Your Crown: A Novel 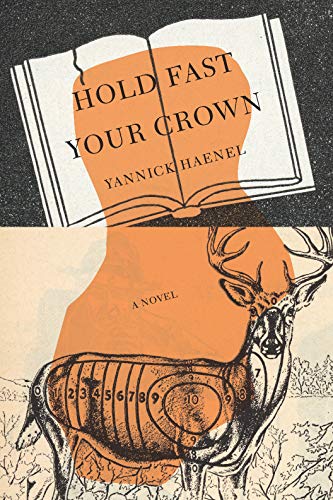 “Hold Fast Your Crown thrives on Haenel’s buoyant prose, which remains unabashedly overstuffed and declamatory, pell-mell and poetic, throughout a weird and winding tale.”

The narrator of Yannick Haenel’s Hold Fast Your Crown gushes chaotic, luminous, bountifully allusive prose about harrowing misadventures and boozy hallucinations in Paris and New York from what he assures readers is the safe remove of emotion recollected in tranquility, written far away on the banks of a lake in Italy.

As he disclaims early and often, “At the time, I was crazy—let’s just say I was possessed—names, books, films, lines from books and films, were teeming, alive, inside my head, they planned bacchanals together, and there was nothing I could do to pull them apart.”

Haenel’s novel, winner of the 2017 Prix Médicis, arrives stateside in an expert English translation by Teresa Lavender Fagan. It recounts a particularly untethered period in the life of a broke, 50-year-old novelist who is quixotically shopping a 700-page screenplay for an “impossible” biopic about the woefully-unappreciated-in-his-time Moby-Dick author Herman Melville. At the heart of the screenplay stands the notion that “in this world of lies, truth is forced to flee into the woods like a frightened white deer.”

The unshakable image of the white deer forges a link in the writer’s mind to The Deer Hunter, the Oscar-winning 1978 film by director Michael Cimino. The writer finds a spirit kindred to both himself and Melville in Cimino, whose one-time reputation as the ascendant genius of American moviemaking plummeted with the spectacular failure of his overblown, over-budget western epic Heaven’s Gate. Convinced that Cimino’s fall from paragon to pariah occurred not because of the artistic or commercial shortcomings of Heaven’s Gate, but because that movie’s subversive candor laid bare the ugly truth of the genocidal nightmare behind the American Dream, the author of The Great Melville concludes that Michael Cimino, wherever he may be, whatever he may be doing now, is the only person who can make his film.

The adventure that begins with this epiphany unfolds so improbably that even the narrator wonders at times if it’s really happening. He spends much of the novel as a virtual shut-in, devoting the final weeks in his apartment before his impending eviction to repeat viewings Apocalyspse Now in an alcoholic fog with a Dalmatian who belongs to his terrifying, doe-shooting, absentee neighbor.

But through his connection to Pointel, a powerful French film producer, Haenel’s narrator spends a strange, transcendent evening in New York City sharing his screenplay with Cimino himself (who approvingly reads much of The Great Melville in its author’s presence and later acts out a spellbinding treatment of a film he’ll never make). What’s more, he enjoys an endless boozy dinner in one of Paris’s most exclusive restaurants in the company of Pointel, an entrancing graduate student, and Heaven’s Gate star Isabelle Huppert.

None of this makes sense, and the narrator knows it. He confesses to a belief that he lives in multiple dimensions at once, and brings himself to the brink of total dissolution to live the novel he’s writing. Since the night at the restaurant, he confesses, “every moment for me has become an awakening, or a falling asleep. It’s night, it’s day, any time . . . I don’t know if my eyes are open or closed. Did I dream of Cimino, New York, the Statue of Liberty? Did I really see those films where the deer were offering me their heads? And Tot, Anouk, Pointel, Isabelle Huppert—do they really exist?”

What saves Hold Fast Your Crown from its frequent implausibility (and some dense, confusing, and only marginally readable stretches) is a succession of set pieces that Haenel brings arrestingly to life. These scenes are breathtakingly varied: Cimino’s absurdist antics on the Staten Island Ferry, Pointel’s account of days he spent staring into the eye of the dead stag that was pinning down his body in a car, Huppert’s vivid recollections of mandated “research” for Heaven’s Gate in a Montana brothel, and a staggering meditation on the meaning of Christ at a funeral in the shadow of the Isenheim Altarpiece.

By turns confounding, confusing, and undeniably dazzling, Hold Fast Your Crown engages in energetic dialogue with the influences that crowd its pages with rich and rewarding allusions. It’s a remarkable, sustained, highwire act, a book that seems constantly to teeter on the edge of disaster without ever quite succumbing.

Hold Fast Your Crown thrives on Haenel’s buoyant prose, which remains unabashedly overstuffed and declamatory, pell-mell and poetic, throughout a weird and winding tale. Perhaps it’s Haenel’s unflagging belief that all of this is worth saying that makes it all work, as in his description of Cimino’s one-man show, spontaneous simulacrum filmmaking:

“And the films that Cimino brought to life with simple movements and simple words, like a showman, like a magician, were connected to that original point—well before the invention of the magic lantern—where the image didn’t exist. There has never been a need for the screen, and in the future there would still be no need. Words would be enough, they are what makes us see.”