Hockney/Van Gogh: The Joy of Nature 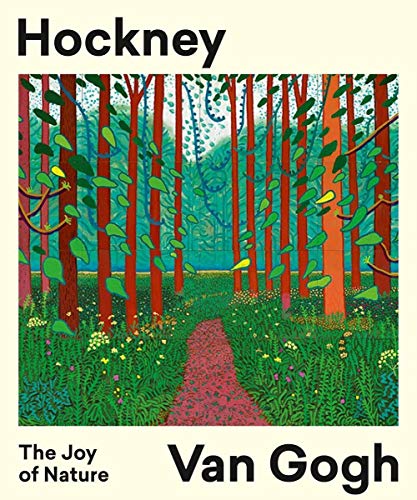 “This exhibition is surely a testament to the longevity and influence of Hockney himself. . . . Hockney/Van Gogh: The Joy of Nature makes it clear that Hockney is a fixture in the upper levels of a historical dialog and one who is certainly still capable of holding our attention.”

The similarities between British painter David Hockney (b. 1937) and Vincent van Gogh (1853–1890) are bold, fresh and exciting even in spite of the century that divides their work. Hockney/Van Gogh: The Joy of Nature posts the two artists side-by-side in this insightful exhibition/catalog produced by the Van Gogh Museum, Amsterdam, and curated/authored by Hans den Hartog Jager.

Movement, brush work, motif, composition, light and color are some of the shared artistic vocabularies between Hockney and van Gogh. Observing Hockney’s Arrival of Spring in Woldgate, East Yorkshire in 2011 next to van Gogh’s Undergrowth with Two Figures (1890); or Woldgate Vista, 27 July 2005 next to The Harvest (1888); or any number of Hockney’s charcoal sketches lined up against van Gogh’s, it is easy enough to discern their sympathetic spirits. Stylistic differences do little to muffle the impact.

Den Hartog Jager takes the reader on a solid but brief trek through Art History 101 pointing out the historical context within which van Gogh operated. Mainstream artists of van Gogh’s time were dominated by “Romantic” traditions of a taste for and acceptance of an art that mimicked nature as close to real in depiction as possible.

From then on each subsequent avant-garde period pulled artists further into a more conceptual way of seeing and depicting until art reached a point of complete abstraction. Van Gogh was a pioneer, pushing the boundaries of the connection between images and realism by also painting emotional responses to what he saw, giving emotions his own unique language. He manipulated the traditional use of perspective, color, subject matter, and most shockingly, artistic personality.

Even beyond the similarities of the painterly toolbox (movement, brush work, motif, composition, light and color), these two artists share a way of seeing. The way they interpret what they see comes from the same roots. Their guiding principles are at the essence of who they are as artists. They both wanted to release their imaginations and present a unique way of looking at the world around them. “The strongest connection between them is the deep, intense longing, felt by both artists throughout their careers, for new vistas and new worlds.”

The single essay titled “A New Horizon” is a crystal clear and informational tracing of van Gogh’s influences and the historical significance of painting traditions which are, in turn, brought up to our contemporary Hockney. Den Hartog Jager’s voice is pleasant and easy going, lending his writing both intelligence and approachability.

Full color illustrations fulfill the reader’s visual thirst and, with the exception of the essay and an interview with Hockney, are the primary focus of the catalog. They are organized into four topical sections within which a critical comparison is a natural byproduct, with a Hockney on one side of the spread and a van Gogh on the other. It is easy to recognize that van Gogh was a fresh and supremely modern painter for his time, and Hockney as well, maintains an air of lively rebellion in his work.

Speaking of continuing in the lively air of rebellion, Hockney—in his eighties—is still pushing the limits of fine art. Translating his artistic curiosity into the technologies of our day, Hockney makes use of photography, computer programs, iPads, and the digital age to manipulate new images and create a modern energy in his art—which seems to be working quite well for him as his pieces are in high demand.

This exhibition is surely a testament to the longevity and influence of Hockney himself. Quite contrary to van Gogh, Hockney has received much success in his lifetime. To be a living artist gathered among the work of a now-revered mover and shaker and to already be recognized as an established role model for the younger generations, Hockney/Van Gogh: The Joy of Nature makes it clear that Hockney is a fixture in the upper levels of a historical dialog and one who is certainly still capable of holding our attention.