Hobnail and Other Frontier Stories: With a Foreword by #1 New York Times Bestselling Author Tom Clavin 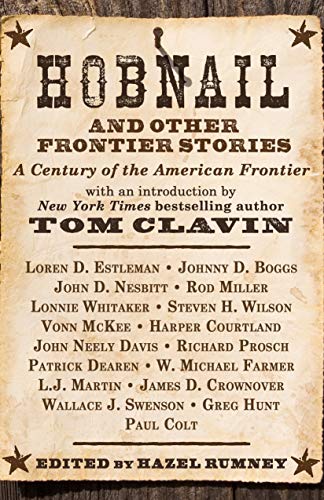 “Hobnail and Other Frontier Stories can be viewed as a primer on western settlement history as well as a sampler of today’s best western fiction writers.”

Western fiction lends itself well to the short form, and collections like this are a terrific introduction to who’s writing in the genre today. Many of us are familiar with the famous Western authors—Louis L’Amour, Zane Grey, and Max Brand—who helped define the genre. Now that they are gone, their classic work is being expanded by a new generation.

While listed in alphabetical order above, their stories are presented chronologically by subject in the collection. This smart sequencing by the editor reflects the reality of western movement in the United States as a constantly expanding frontier.

The collection contains no “cowboys and Indians” adventures of that type that became cliché in television and film during the mid-1900s. While yes, both parties are represented, in these tales we learn what they were truly like.

As bestselling author Tom Clavin explains in the introduction: “Stories about the American frontier must read and feel authentic. No longer is there a gullible public on the East and West Coasts who will swallow whole the exaggerations, embellishments, and outright fabrications of the dime-store novelist. Today’s readers of fiction about the West want to be entertained, yes, but they also want the research, the facts, the authenticity that satisfies intellectually as well as emotionally.”

In the Hobnail collection, we get all this.

Subtitled A Century on the American Frontier, the book starts in 1800 when settlers were first pushing past the Appalachian Mountains. The stories move steadily westward, along the major waterways and across the plains into the desert and mountains, capturing historic events like the disaster at the Alamo; the wagon trains on the Santa Fe trail; flesh-and-blood portraits of legendary heroes such as Kit Carson; peaceful and violent interactions between Europeans and Natives; the aftermath of various wars; the intrusion of the transcontinental railroad; and the conflicts between “civilization” from the east and frontier life in the west, even after the frontier was officially closed and the Native population had been all but exterminated.

There is little romance in any of the stories. Exploring and settling America was brutal business. People were moved to go west not just from curiosity or the need to conquer or begin a new life. As much or more, they were driven by poverty and hardship, or lack of options because what they’d already tried had led to a dead end, if not disaster.

Some were running from the law—which followed them—increasing over the decades in sophistication and effectiveness. Other people ended up in the west by chance, left aimless and homeless by the Civil War. Still more were drawn there by staying in the military, or being involved in developmental enterprises such as the railroad and commerce.

The stories’ diversity comes not just from the time frame and multiple authors. They also provide diverse narrative points of view: male, female, young, old, human, animal, whiteskin, brownskin, redskin, through first-person or third-person eyes. Through this mix we get a broad perspective on the westward phenomenon beyond what’s normally found in an individual novel or even a nonfiction study of the era.

Hobnail and Other Frontier Stories can be viewed as a primer on western settlement history as well as a sampler of today’s best western fiction writers. Many of them are novelists, too, so the collection is an excellent launch point for readers interested in the genre to find new long and short stories to satisfy their tastes and enthusiasms.