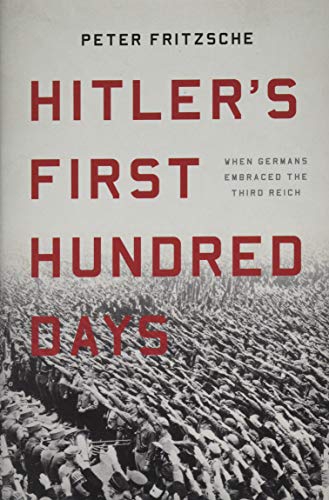 “Fritzche’s focus in this erudite and interesting book is less on how and why Hitler gained power, and more on the mostly favorable response of the German people to the Third Reich.”

Adolf Hitler’s rise to power in Germany continues to fascinate and trouble historians. How did a well-educated, modern, and sophisticated people embrace leaders who brought about global war and genocide? How, in other words, did Germans come to accept and embrace Naziism?

University of Illinois history professor Peter Fritzsche has been writing on this and related subjects for many years, including in his previous books An Iron Wind: Europe Under Hitler, Life and Death in the Third Reich, and Germans into Nazis. His new book focuses on Hitler’s first hundred days in power, after the aging German President Paul von Hindenburg reluctantly appointed Hitler as Chancellor of Germany on January 30, 1933.

Fritzsche recognizes that Hitler’s rise to power stemmed in part from Germany’s defeat in the First World War and what John Maynard Keynes later called “the economic consequences of the peace” that followed the war, including the worldwide economic depression of the late 1920s-early 1930s. But Fritzsche’s focus in this erudite and interesting book is less on how and why Hitler gained power, and more on the mostly favorable response of the German people to the Third Reich.

Fritzsche’s book, therefore, is part history, part sociology. And that sociology is inseparable from the events of 1914, when Germans young and old envisioned victory in war, and 1918, when a democratic revolution attempted to reconcile Germans to defeat. In the end, what Fritzsche describes as a “complicated combination of coercion and consent” framed Nazi rule.

“The whole Nazi project,” Fritzsche explains, “rested on the resolve to reverse the tide of history by vanquishing the revolutionary traitors of 1918 and establish a new Reich based on the patriotic union of 1914.” Germany’s “enemies” within—Communists, Social Democrats, Jews—lost the war and stood in the way of Germany regaining its “collective strength” and “racial” solidarity, according to the Nazis.

Fritzsche shows that Hitler used both persuasion and coercion to harness popular support for dictatorial rule. Thuggish SA brownshirts roamed the streets and physically assaulted “enemies” of the Reich, especially Jews and communists. The first concentration camps were established. The reaction of most ordinary Germans was silence, manifesting a “lack of civic courage in defense of an open society” partly out of fear, but even more so because, in Fritzsche’s words, “they were too busy dancing alongside the Nazis.”

In early March 1933, there were mass arrests in Dusseldorf, Cologne, Breslau, and Aachen. The Nazi terror spread to Berlin and soon, Fritzsche writes, “Berliners slowly fell into step with the new times.” “Denunciations led to arrests and arrests to confessions,” the author explains, “so that the political police, the Gestapo, quickly destroyed underground Communist and Social Democratic networks.” One German woman wrote in her diary, “Thank God we have this resolute government.”

By late March 1933, the Nazis enacted legislation that criminalized opposition to their rule. Yet, most Germans, Fritzsche writes, “preferred the Nazi future to the Weimar past.” Hitler and the Nazis appealed to “community, nation, and race.”

Hitler’s first hundred days included the first overt attacks on Jews, which included boycotts of Jewish businesses, the exclusion of Jews from public sector employment, economic discrimination against Jews, the prohibition and punishment of so-called “racial defilement” (intimate relations between non-Jews and Jews), and physical assaults on Jews. The lesson of the first hundred days, Fritzsche writes, was that “the remaking of Germany required the unmaking of Jews. German life meant Jewish death.”

Most Germans also went along with the Nazis’ militarization of German society and a kind of social Darwinism that favored the strong over the weak. This was true in both domestic and international politics. The weak inside Germany were sterilized, incarcerated, or destroyed. The weak in the outside world were trampled on and conquered.

Fritzsche’s analysis of the appeal in Germany of Naziism is penetrating and sound. Where he goes astray is when he claims that “Fascism” had a “magical pull” across the Rhine in France and elsewhere. To be sure, Hitler and the Nazis had their followers and would-be imitators in other countries, but they did not come to power in those countries without Nazi conquest or coercion. None of the other “fascist” leaders in Europe, with the exception of Mussolini in Italy (who gained power long before Hitler) rose to power based on widespread popular support.

Fritzsche admits that the “fascist wave failed to crest.” But in reality there was no fascist wave. Fascism, however it is defined, never achieved the international appeal of communism.

The author concludes the book by attempting to compare and contrast Hitler’s first hundred days to FDR’s hundred days at the beginning of the New Deal. But this is like comparing and contrasting apples and oranges. FDR was elected president in a country that had emerged from World War I victorious and prosperous with a century and a half of democratic tradition. Hitler came to power in a country that suffered defeat in that war and had experienced unstable democracy for a little more than a decade.

As Hannah Arendt, James Burnham, and Paul Johnson have explained, Lenin’s international socialism had much in common with Hitler’s national socialism. Here, as elsewhere, the Left-Right ideological perspective obscures more than it enlightens.