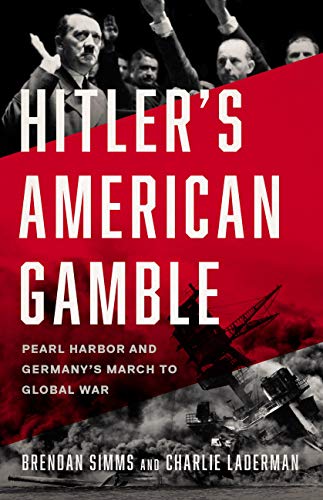 “the five days from the Japanese assault on Pearl Harbor to Adolf Hitler’s declaration of war on the United States were among the most fraught, but remain some of the least understood, of the 20th century.”

The authors rightly begin Hitler’s American Gamble: “the five days from the Japanese assault on Pearl Harbor to Adolf Hitler’s declaration of war on the United States were among the most fraught, but remain some of the least understood, of the 20th century.” “December 11, 1941 had been a momentous day, and arguably the most important twenty-four hours in history.” “The world, then held its breath.”

America’s entry into the war in Europe after the Japanese attack was not “a foregone conclusion.” Although President Franklin Roosevelt prioritized the conflict in Europe, “an immediate declaration of war on Hitler was a tremendous political risk” but especially as America was at war with Japan and doing badly. “Cables from Berlin to Tokyo, intercepted and decoded by US intelligence, suggested that Germany would join any war that Japan fought against the United States . . . but Hitler’s behavior was not so easy to predict.”

Japanese planners actually feared that Germany would make peace with Great Britain “leaving Japan to fight alone.” Russian intelligence believed that Japan would not war on the Soviet Union, giving Hitler another reason to not join Japan’s war with the United States. With Japan’s attack on the United States, the German government felt that no treaty obligations required Germany aiding Japan.

This crisis began in World War I when President Woodrow Wilson kept America out of that war while allowing sales and loans to Great Britain that were denied to Germany. The United States finally entered and ended that war with Germany defeated.

Italy and Japan, although victors in World War I, felt betrayed in the peace settlement and subsequent treaties promoted by the United States to protect China from Japan. Japan failed to obtain racial acceptance and equality as a part of the League of Nations and in the new world order.

In the 1930s, President Roosevelt appeared weak, “trapped by isolationist opinion and more concerned with domestic politics than an emerging international crisis.” Americans could also be anti-British, opposed to any foreign military adventures, or object to the expansion of the already global conflict.

Roosevelt had done what he could, the United States built a powerful navy. “The Lend-Lease Bill would enable the United States to make a critical contribution to defeating Nazi Germany without direct military intervention.” Finally, “the president moved quickly to freeze Japanese assets,” thus cutting off American oil and steel to resource poor Japan.

Conversely, Joseph Stalin, the leader of the USSR, initially tended to side with Germany over the British Empire. His Soviet Union “provided copious amounts of raw materials and foodstuffs vital to the Nazi war machine.” “The mutual enemy of Hitler and Stalin” was “the British Empire and the United States.”

Japan feared “that Hitler had given Stalin the green light to continue the [Soviet Union’s] attack on [Japan in] Mongolia.” The Japanese government’s leaders could even envision a racist alliance against Japan following a peace made among the warring world powers.

The Japanese government considered war with the Soviet Union and then declined to do so, especially as the German forces began to lose to the Soviet military. Japan’s leaders came to seek instead to somehow find accommodation with Great Britain and the United States.

Remarkably, Japanese leaders all seemingly agreed that any long war with the United States must end in Japan’s defeat and that Hitler’s empire was coming apart at the seams. They accepted these hard realities even as the Japanese navy prepared to attack Pearl Harbor.

American and British leaders believed that the massive Japanese naval forces on the move in late 1941 would attack the resource-rich British and Dutch colonies, not yet bringing America into the war. They seriously underestimated the capabilities of the Japanese military on land and at sea. A string of Japanese victories immediately followed Pearl Harbor including the sinking of the British warships Prince of Wales and Repulse.

Hitler’s American Gamble gives an almost heartbeat by heartbeat account of December 7, 1941 and the four days that followed. Leaders and the peoples of America, Britain, China, Germany, Japan, and the Soviet Union each learn of the attack at Pearl Harbor. Bad news for Germany continued to come from the war with the Soviet Union.

President Roosevelt agreed “that Germany was the driving force behind Japan’s actions” but he declined to “request a declaration of war against Hitler at this time.” He “was well aware that the conflicts in the Pacific and Europe were inextricably linked, he remained acutely conscious that many of his fellow citizens were unconvinced.” He had to fight for national unity against Japan first.

On December 11, 1941, “the United States was now the Third Reich’s open enemy.” Adolf Hitler addressed the German people for ninety minutes to announce the declaration of war against the United States.

The Nazi leader also compared how he and Germany had recovered from the Great Depression to what he claimed to be the failures of the rich capitalist Franklin Roosevelt and his New Deal. He went on to explain that Germany and its allies fought a war to equitably share the world’s resources.

Hitler called Germany’s and Japan’s conflict as a defensive war for freedom from “Anglo-Saxons, the Jews and their Bolshevik puppets.” Nonetheless, “Germany and Japan had no experience with military cooperation or joint values to fall back on.” The two nations fought separate wars and separately.

Simms and Laderman never lose sight of the ways that these events affected how the Nazis treated European Jews. Hitler held them as hostages to America’s behavior toward Germany. Roosevelt, however, gave as much aid as he could within the law to Great Britain and the Soviet Union. When Hitler “declared war on the United States, he also pronounced a death sentence on the Jews of western and central Europe.”

In Germany’s government, however, “there was no opposition to the prospect of a new war.” That America was essentially already at war with Germany seemed obvious. Much of the war was fought over blockades and embargos, for Hitler that meant a victory in that at least temporarily America would suspend aid against Germany.

The German morning report (OKW) on the war that day was overwhelmingly positive but it “bore no relation to the actual situation.” Germany was failing everywhere and now had to face the coming American juggernaut.

The situation became almost as if a new World War had replaced the old. President Roosevelt had to suspend help to Great Britain and the Soviet Union when both held on in no small way with American aid. In the long run, however, America’s full entry into the war would provide vast resources of all kinds that eventually overwhelmed the war machines of Germany and Japan.

The prose in Hitler’s American Gamble needs polish (and more clarity, identifiers, nouns, and pronouns). That, however, will not prevent the interested reader from finding a fast-moving, even gripping story that informs as well as enlightens.

The authors claim “to draw on a broad range of often neglected sources, especially German, British and American” but especially “the German Foreign Office.” Hitler’s American Gamble has a bibliography of primary sources consulted and extensive annotation.