Hitler, Stalin & I: An Oral History 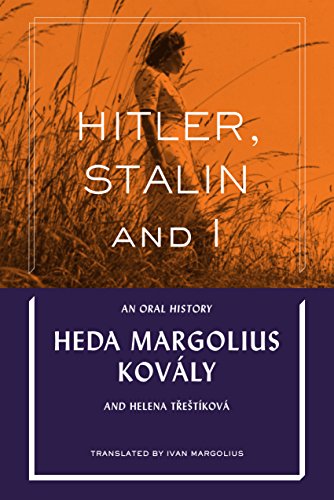 “It is hard to imagine a reader who would not be inspired by the momentous life of Heda Margolius depicted in Hitler, Stalin and I.”

Hitler, Stalin and I: An Oral History is at once a harrowing journey, a kaleidoscope of images and sounds. If a reader truly hears the haunting words as if they are spoken one can begin to understand that this life and death human drama is not just about one survivor but a meaningful observation of an even more significant story about the bloody outcomes of extremism.

Heda Margolius’ first person account of her living nightmare is translated from the Czech by her son Ivan Margolius. This important book parallels the 50th year anniversary of the uprising against the Soviet Union’s influence in Post WWII Czechoslovakia that became known as The Prague Spring.

It also marks 65 years since the infamous Joseph Stalin used his influence to institute a trial that scapegoated high ranking Jewish officials of the Communist party. Heda’s first husband was convicted in that trial and executed. He and the other victims were proclaimed innocent after their deaths. Only recently was her son able to listen to the real life recording of his father’s deposition, which was clearly a coerced account read aloud by him.

The inception of this book occurred when Heda’s son (and translator of this book) found the transcript of his father’s trial as a young boy; however, it took a number of years to convince his mother to share their story for others to absorb.

Heda begins her life story with her father’s days as a soldier in WWI wherein a rabbi, two Muslims, and a priest took care of two wounded men and nursed them back to health. Heda explains, “This shows clearly how people understood each other, tried to help each other’ it didn’t matter what nationality or religion they were. People had compassion then, which is something that died out with the First World War.”

Though disabled from the war her dad opened a metal work factory that manufactured zippers, buttons, etc. and was thriving. He even became acquainted with renowned writers such as Franz Kafka. Life was stable. And then came Hitler.

When Hitler arose, the Germans took over his factory, but her father remained working in the factory.

Life became extremely difficult for Heda and thousands of others. Her personal accounts of the time she spent in Lodz Ghetto, (developed by the Nazis to contain Polish Jews) are extraordinary. This strong and vibrant woman later escaped from Auschwitz concentration camp, which narrowly saved her from a “death march.”

One of the most startling events in this inspirational life memoir is that none of her friends in Prague prior to her imprisonment, would help her in any way. This is one of many moments in Hitler, Stalin and I that could be portrayed in a Hollywood film. Many moments are appalling and can shock the reader’s core.

But the story doesn’t end in sorrow. Heda was banished to the U.S. after an invasion in her native Czechoslovakia in 1968. But throughout her many life challenges she managed to maintain a positive outlook on life and people. She thrived and became a noteworthy author.

It is hard to imagine a reader who would not be inspired by the momentous life of Heda Margolius depicted in Hitler, Stalin and I.