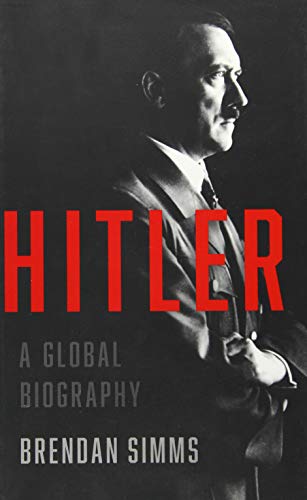 “Though one can ultimately disagree with Simms’ revisionist arguments, he has made an impressive effort to challenge the conventional history of Hitler’s approach to the world and war in the 1930s and 1940s. This book will cause many to rethink long held beliefs and notions about Hitler and the Second World War.”

In the Introduction to Hitler: A Global Biography, Brendan Simms notes that more than 120,000 books and articles have been written about Adolf Hitler and the Third Reich. Simms highly praises Alan Bullock’s Hitler: A Study in Tyranny, Ian Kershaw’s more recent two-volume biography, and other works, but he contends that “our picture of [Hitler] has hitherto been seriously incomplete.”

Simms, a historian and fellow at Peterhouse College, Cambridge, and the author of eight previous books, makes three provocative revisionist claims. First, Simms argues that Hitler viewed Britain, the United States (the “Anglo-Saxon powers”), and “global capitalism,” not Soviet Russia and world communism, as Germany’s principal antagonists before and during the Second World War.

Second, Simms contends that Hitler viewed the German Volk not as a “master race,” but as inferior to the Anglo-Saxons whom he believed benefitted from years of German emigration.

Simms’ third and most controversial revisionist contention is that Hitler’s genocide of Europe’s Jews was fundamentally a reaction to the belligerency of the British and American governments, which Hitler believed were controlled by “world Jewry.” In other words, he implies that had Britain and the United States reached an accommodation with Nazi Germany, Europe’s Jews might have been spared the Final Solution.

Simms divides his biography into six parts: Hitler’s early life until the end of World War I; the years 1923–1927 when Hitler rose to leadership of the National Socialist Party; Hitler’s entry into Germany’s democratic politics during 1928–1932; his achievement of legal political power and the formation of the dictatorship between 1933 and 1936; the years of his successful diplomacy in Europe, 1937–1940; and 1941–1945 when Germany was at war with the Grand Alliance of Britain, the United States, and the Soviet Union.

Hitler’s early life is covered in a few pages. Simms believes there is little about those years that shaped Hitler’s worldview. Hitler’s political views began to take shape during the First World War. Hitler fought on the Western Front against British, French, and later American soldiers. Simms believes that Hitler’s “preoccupation” with the Anglo-Saxon powers dates from his years fighting on the Western Front.

“Hitler had come away from the war,” Simms writes, “with a keen sense of the power of the Entente, especially the British, in his eyes the most formidable of the ‘world of enemies’ against which he had battled in vain those four years.”

Like many Germans, especially those who fought in the war, Hitler found the Versailles Treaty, which was dictated to Germany by the victors, humiliating. Simms writes that Hitler blamed German politicians but also “the power of Anglo-American and Jewish international capitalism” for Germany’s woes.

Simms further argues that Hitler in the early 1920s did not fear communism as an external threat, but rather as a domestic one. And it was also during this period, Simms believes, that Hitler expressed concern over Germany’s racial purity and the effect that German emigration (especially to the United States) had on the strength (or rather lack thereof) of the German Volk.

Simms recounts how Hitler and the Nazis gained power in Germany through legal means, then used emergency powers to destroy the fragile German democracy and replace it with a one-party totalitarian state.

What was Hitler’s goal for Germany on the world stage? Simms argues that Hitler wanted Germany to take its rightful place among the world’s great powers and to elevate the racial purity of the German Volk by getting rid of “undesirables,” encouraging the German diaspora to return to the Fatherland, and expanding Germany’s lebensraum (living space) to the east.

Simms doubts that Hitler sought world domination but fell into the trap of previous empires by constantly seeking to expand to protect its new territories.

The author also notes that Hitler’s concept of lebensraum to the east was consistent with German geopolitical theories developed in the 1920s by Dr. Karl Haushofer and his intellectual disciples. It was Haushofer, after all, who considered Britain’s Halford Mackinder the world’s greatest geopolitical thinker.

Mackinder had warned in 1904 and again in 1919 that German command of Eastern Europe could lead to its control of the central-Asian “Heartland,” which would give Germany preeminence on the Eurasian continent. Germany could then use the vast resources of Eurasia to challenge the sea powers of Britain and America.

Simms mentions that Haushofer was introduced to Hitler by Rudolf Hess in the mid-1920s. It is unclear, however, whether Hitler followed a geopolitical blueprint in his diplomacy and military moves in the 1930s and during the Second World War. Haushofer applauded the Nazi-Soviet Pact of August 1939 but opposed Hitler’s subsequent invasion of Soviet Russia.

Hitler, Simms claims, sought to avoid waging war against Britain and the United States. Yet he pursued policies that brought Britain into the war, and he declared war on the United States shortly after Japan attacked Pearl Harbor.

When the Anglo-Saxon powers refused to accept Hitler’s conquests, he blamed Jewish-led capitalist influence in both Britain and the U.S. and ordered the extermination of Europe’s Jews. But Hitler’s war against the Jews began before the Anglo-Saxon powers went to war against Germany. Nothing short of regime change or Germany’s early defeat could have stopped the Final Solution.

Simms is right that Hitler viewed his policy of lebensraum in the east as a “necessary measure to gain the critical territorial mass and resources to balance Anglo-America,” but it is doubtful that Hitler would have refrained from implementing the Final Solution had Britain and the United States made peace with Germany.

Conventional histories of the Second World War judge the fighting between Germany and the Soviet Union on the eastern front as the decisive battle of the war. Simms disagrees. He contends that Hitler’s war against Soviet Russia was subordinate to Germany’s conflict with the Anglo-Saxon powers.

Simms is on firmer ground in his claim that Hitler was anti-capitalist. A few previous observers, such as Hannah Arendt, James Burnham, and Paul Johnson, have pointed out that the Nazi regime had much in common with the Soviet regime. Both were one-party states. Both sought to eliminate all domestic political rivals. Both imposed totalitarian control over their citizens. Both were expansionist powers. And both were anti-capitalist. Far too many people forget that Nazi was short for National Socialism.

Though one can ultimately disagree with Simms’ revisionist arguments, he has made an impressive effort to challenge the conventional history of Hitler’s approach to the world and war in the 1930s and 1940s. This book will cause many to rethink long held beliefs and notions about Hitler and the Second World War.