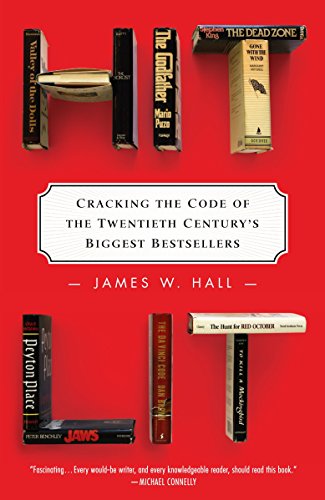 “True to his word, the author manages to spell it all out for us in down-to-earth detail with nary a hint of academia clogging up the process.”

It’s a simple premise: take a dozen bestsellers from across the 20th century, turn them inside out and upside down to see what makes them tick, analyze all their similarities and, voila!, you have the recipe for writing a bestseller.

Author and literature professor James W. Hall decided to find out and with some smart forethought—not least the title’s clever play on the hugely popular “chick lit” genre—he may just nudge this albeit nonfiction book into selling quite a few copies itself.

The book’s other clever hook, of course, is its inevitable appeal to the hundreds of thousands of would-be authors out there frantically seeking that holy grail of fiction—the secret to bestseller success.

That the author should have ended up writing about popular fiction is somewhat surprising given that, as a youngster growing up in a southern town in the 1950s, it was touch and go whether he would read any book, especially for fun.

It was, he says, as unlikely as if he’d decided to knit a sweater for the football coach.

So when his mother one day dropped him off at the local library to kill time while she ran some errands, he was mortified—until he spotted the word nude.

Like many a 10-year-old before and after, it was his entrée into the world of books. And like most of them—luckily—his taste in books eventually expanded to matters beyond preteen titillation.
“. . . later I fell in love with Virginia Woolf, Lawrence Durrell, and John Fowles, Faulkner and Steinbeck and the poets Sylvia Plath and Anne Sexton and Robert Frost. It came as a shock to learn that sports and reading were not mutually exclusive.”

So in love did Mr. Hall fall that books became not only his passion but his profession, although for some time he was quite the literary snob.

As a teacher, the avant-garde and experimental became his specialty. It was probably a bonus that “they required someone like me to help the uninitiated student fully comprehend and appreciate their esoteric beauty.

“I held up these challenging novels as the gold standard of literary achievement, and I touted them as superior in every regard to novels that still employed such old-fashioned techniques as plot and character development.”

Happening on a collection of year-by-year bestseller lists one day in the university library, “starbursts of nostalgia” were evoked by the names of novel after novel that he’d read years ago and, before long, he’d chosen 10 of them and put together a course in popular fiction.

What started out as “little more than a whim” proved, he says, to be a watershed moment in his life and set him off on an odyssey to find out what the “larger wisdom” is that makes a book sell by the bucketload.

For Hit Lit, Mr. Hall has offered up his own wisdom—gained over more than 20 years of study and lectures—to examine a dozen of what he calls spectacular megahits.

As different as the stories seem, reading Mr. Hill’s autopsy report we discover that in many ways, they are all alike, too. True to his word, the author manages to spell it all out for us in down-to-earth detail with nary a hint of academia clogging up the process.

Sometimes fascinating, often predictable, Hit Lit is unfortunately tediously drawn out. What may hold the attention broken up into tutorial-size chunks is simply too much for a full-length book.

But if you take the trouble to plow through it, will you find, hidden in one of its pages, the secret formula that will make you an overnight bestselling author? Does he crack the code? To answer, unfortunately, would give the game away.