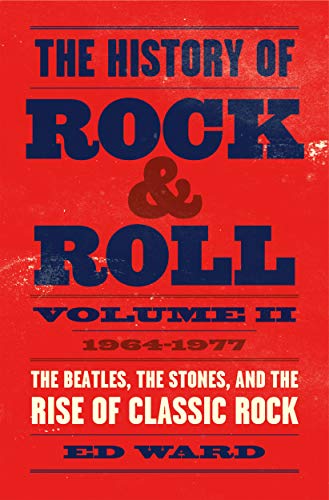 “The History of Rock & Roll, Volume 2 delivers more than its share of amusing and revelatory anecdotal glories, while still adhering to its mission statement of identifying essential movements in the music and charting their rise and fall.”

The first volume of Ed Ward’s projected History of Rock & Roll trilogy, published in 2016, started with the somewhat comical premise of beginning in 1920, decades before the ascendancy of Elvis Presley, Chuck Berry, “Shake, Rattle, and Roll,” “Rocket 88,” or the phrase itself as name for a genre of music.

But it did kick things off with Mamie Smith’s 1920 hit “Crazy Blues,” which is a fairly conventional place to start the story that leads to (among other things) rock ’n’ roll. And as anyone who has encountered Ward as the (recently retired) rock ’n’ roll historian of Terry Gross’s Fresh Air can attest, Ward is a marvelous storyteller and a gifted miniaturist. At their best, Ward’s History of Rock & Roll books, including the just-published second volume, reveal rock history in a cornucopia of wondrous miniatures, cleverly threaded into an engaging narrative.

If the challenge of Volume 1—covering the years 1920–63, from “Crazy Blues” up until just before the arrival of the Beatles in America—was tracing the origins of rock ’n’ roll through decades of recordings that never went by that name, the trick in Volume 2, focused on 1964–77, is making the stories of the music’s most obsessively documented era seem fresh. Ward and his fellow first-generation rock critics—Dave Marsh, Robert Christgau, Greil Marcus, and the late, lamented Lester Bangs and Paul Williams—would seem to have left few of that period’s worthwhile stories untold; Ward himself co-authored Rolling Stone’s authorized (and somewhat interminable) rock ’n’ roll history Rock of Ages.

To be sure, The History of Rock & Roll Volume 2 contains fewer surprises than its predecessor. As Ward mentions in his preface, it quickly enters a period that he and his contemporaries covered as it was happening. “Since this period saw the rise of the rock press,” Ward writes, “you could fill several bookshelves with nothing but Beatles books, Stones books, Grateful Dead books, books on labels, books on individual albums, books on posters and album covers, as well as books of criticism and theory.”

Ward’s book doesn’t attempt to cover any or all of these subjects in great depth; his book’s purpose, he says, is to provide an overview, and “to show how movements arise, how they interact with their intended audiences, and how they die.”

If that sounds a bit too academic, too clinical, or even a little gloomy, then it’s misleading. The History of Rock & Roll, Volume 2 delivers more than its share of amusing and revelatory anecdotal glories, while still adhering to its mission statement of identifying essential movements in the music and charting their rise and fall.

Avoiding the de rigeuer “rock genealogy” approach that might start chronicling, say, the mid-’60s San Francisco rock scene with famous-band progenitors the Warlocks (the Grateful Dead), the Great Society (Jefferson Airplane), or the Golliwogs (Creedence Clearwater Revival), Ward begins (and periodically returns to) the seemingly out-of-the-way tale of three friends stoned and stranded in a cabin in Silver City, Nevada, in 1965, two of whom went on to open the Red Dog Saloon, which hosted a not-yet-musical house band that became a legendary but tragically under-recorded rock group called the Charlatans. The threads that connect that story to the dawn of the Grateful Dead, Ken Kesey’s Merry Pranksters, Jefferson Airplane, Big Brother & the Holding Company (Janis Joplin’s first band), and others are the essence of what makes Ward’s History of Rock & Roll an often-delightful read.

With so much ground to cover, Ward rarely lingers on one story or subject for long. He sets out not just to summarize a span of years but a dizzying array of musical movements, from the British Invasion to folk and folk-rock, acid rock, Motown, Memphis soul, singer-songwriters, funk, and prog-rock. (Essentially, every major movement of the ’60s and ’70s up to but not including disco and punk.) Ward considers questions that may seem trivial or simply subjective, like “Beatles or Stones?” and plumbs unexpected depths.

Switching from miniatures to overview mode, the book undergoes several jarring tempo shifts, linking disparate topics with threads that seem carefully stitched and tenuous at once. Segueing through well-placed references to Bob Dylan’s last acoustic tour of England, the Lovin’ Spoonful’s folkie jug-band roots, and “King of Rock & Soul” Solomon Burke’s “odd stab” at Bob Dylan’s “Maggie’s Farm,” Ward improbably wends his way from the recording of the Rolling Stones’ “Satisfaction,” to the scattered LPs featured on the cover of Bob Dylan’s Bringing It All Back Home, the beginnings of the Byrds, Chicago’s incipient white blues scene, the musical matchmaking of future Mama and Papa Cass Elliott, the Kinks’s “Set Me Free,” Otis Redding’s “career-defining” “I’ve Been Loving You Too Long,” and Motown’s stunning string of 1965 smash hits from the Miracles’ “Tracks of My Tears” to the Temptations’ “Since I Lost My Baby”—all in a scant, whiplash-inducing eight paragraphs.

Ward also documents the rise of rock criticism, and particularly its self-conscious canonization in the pages of Rolling Stone. After a typically breakneck run through the much-publicized rock star deaths of 1969–70, the Rolling Stones’ ill-fated free concert at California’s Altamont Speedway, the disbanding of the Beatles, Ward writes, “Keeping track of all this was Rolling Stone, whose year-end circulation filing indicated a readership of 270,811, and whose pages pushed a rock-centric, determinedly San Francisco agenda. The Sixties weren’t dead, they were just filing incorporation papers.”

Ward casts an equally dispassionate eye on such presumptively era-defining events as Woodstock. Insisting that it has “assumed a disproportionate importance in the myth of ‘the sixties,’” he notes that Jimi Hendrix’s performance of “The Star-Spangled Banner,” so powerful in the Woodstock movie and acclaimed as “rock’s ultimate expression of anger at the Vietnam War,” occurred before a diminished crowd of a few thousand on Monday morning, after most of the revelers had left.

If Ward’s mélange of intriguing and off-kilter anecdotes and sometimes nearly threadbare thread-connecting leaves readers hungry for more, fear not, he tells us: Volume 3 is on the way and underway. In the meantime, Ward offers much to satisfy his readers’ whetted appetites with a finely curated bibliography on a range of rock and rock-related topics appended at the end.

Ward concludes the book itself, appropriately and soberingly, with a story that’s mostly a look backward—the death of Elvis Presley—but also a clever nod to the nascent (in 1977) punk era and much more to come, quoting a tasteless if timely note received by an American rock journalist (presumably Ward himself) that summer from a British label publicist: “Only one Elvis left now!”