The History of Rock: For Big Fans and Little Punks 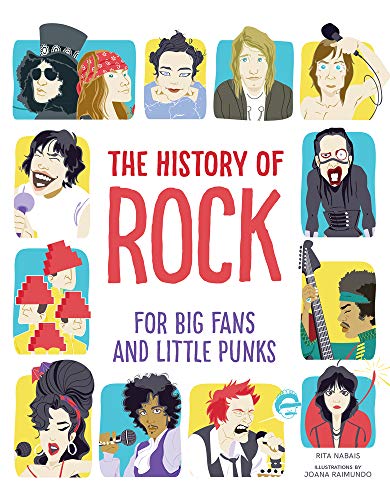 “this book rocks the history of rock.”

The cover of The History of Rock: For Big Fans and Little Punks has a dozen drawn head shots of rock stars, helping to show how thorough this book has been researched. Jimi Hendrix is easy to find with is headband and guitar, as are Mick Jagger with his big lips, Amy Winehouse with her big hair, and Prince in purple.

The first 47 pages of this 112-page book are jam-packed with all the big rockers from Bill Haley and his Comets, Little Richard, Jerry Lee Lewis, and Chuck Berry, all the way to Elton John, the Bee Gees, Tina Turner, and Rod Stewart. After that, the groups aren’t as familiar to a Baby Boomer, but just as important in the evolution of rock today.

This is not an America-centric story. This takes place on the world stage, with Great Britain and the USA being the biggest players. The book includes Bjork, Kraftwerk, and Einsturzende Neubauten as well, although Abba just gets mentioned in a sidebar.

Each important singer or band gets between one third page to a whole page (the Beatles, Stones, Elvis, Johnny Cash, Simon and Garfunkel). The book has 35 sections, four pages of musical genres, two pages of glossary, and one page of acknowledgments.  A reader is bound to learn something about somebody in this fact-filled undertaking.

Some trivia revealed between the black and white guitar-covered end papers include:

• The B-52s were named for a particularly exaggerated and piled-up beehive-like hairdo as Southerners call it, since they originate from Georgia.

• The Ramones are not related by blood.

• The Beach Boys are related by blood, at least four of them.

• Only one Beach Boy knew how to surf.

• Madonna has a high IQ.

• Thriller is the bestselling album of all time.

If you need to know the difference between hard rock and heavy metal bands, this is the book for you. Actually, it’s for nine to twelve year olds, but adults can learn a thing or two, as well.

The Residents had no famous songs (why is this band included?). The hip-hop section is entitled Yo! The Women at the Helm section only has two familiar names out of five.

Several important American bands only made the sidebar cut: Sly and the Family Stone, the Eagles, Crosby, Stills, and Nash, and Van Morrison. Motown singers are not included except for Michael Jackson and the Supremes. The Doobie Brothers got zippo mention. Three Dog Night? Nope. Hall and Oates are not included. Neither are Disco bands; no Earth Wind and Fire in this book. But Johnny Cash, predominately a country singer, makes the cut.

The author and researcher is probably not American since there is a translation credit to Pedro Homero.

Aside from the teeny tiny print in parts of the book and the teeny tiny names on the cover for author and illustrator, this book has done it right. An older reader might have trouble reading purple words on a gold background. The pages are filled with color, and its often white ink color of the words on a blue or purple background. Black is still preferred for best clarity on a white background. Not much of that in this crazy colorful book.

It is safe to say that this book rocks the history of rock. The best feature is the rectangle of facts on each page, showing the names of band members, the year the band was formed, place of origin, genre, and famous songs. It makes the book an excellent reference source.

The author suggests listening to some of the songs while reading about the bands.  YouTube makes that possible and adds fun to the whole thing. The History of Rock is a music teacher’s dream come true.

Rock on, big fans and little punks. This book was written for you.