History of a Pleasure Seeker: A Novel 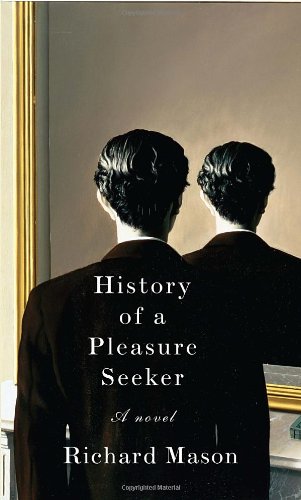 “For a reader who derives pleasure from historical accuracy and realistically drawn personalities, Richard Mason’s rich descriptions may seem superficial and anachronistic, much like the emotional life of his characters. . . . Whether you enjoy this work will depend on what type of pleasure you seek as a reader.”

Piet Barol is an ambitious young man in Amsterdam at the beginning of the 20th century. Brought up by a university clerk in Leiden, he has attained a classical education and seeks a position with a wealthy family as a tutor. He is just good enough at piano—and handsome to the point of being almost pretty—to be seductive. His manners, gleaned from his interactions with the wealthy boys studying at Leiden, allow him to blend in with the upper class.

Portrayed as a pleasure seeker, Piet Barol is more accurately an opportunist, who seeks to use others to occupy a station in life to which he was not born.

He has had limited experience with both women and men. The rare occasions he chooses to be with men are for convenience. He prefers them to be “athletic and close to his own age,” and some of his bisexual liaisons are sublimations of the release he wants to have with women, but he is not above using sex to his advantage with both men and women.

Indeed, he attains his position as a tutor by subtly seducing Jacobina Vermeulen-Sickerts, the 46-year-old mistress of a wealthy household with “the legacy of an athletic youth that was evident in her neat waist and quick, fashionable movements.”

It is his job to tutor young Egbert, a ten-year-old boy who is afraid to go out of the house. Egbert hears voices, which command him to perform repetitively patterned tasks each morning, and about which he is secretive. Both the boy’s education and ameliorating his affliction are the new tutor’s charge. If Piet Barol can help, the appreciation of Egbert’s father will help the new tutor in his pursuit of a bourgeois life.

The father, Maarten, is a hotel owner. His house is full of Louis Quinze furniture with delicate fabric, and much gilding. Maarten enjoys china and porcelain and silver, and is deeply involved in the design of his opulent and fashionable hotels. These decorative arts are described in exquisite detail, as Piet Barol sketches them with skill.

Maarten is a strict Calvinist, whose love for his spouse is expressed with coldness and lack of physical attention. As a businessman he is believable. As a devout Dutch Protestant, his inner thoughts seem wooden and almost inhuman.

The story moves from the calculating wiles of the household’s older daughters to the lives of its staff. Side stories describe business dealings in New York City, and take some of the characters on a cruise ship to South Africa in Piet Barol’s quest for privileged life. Author Richard Mason gives rich descriptions of manners, emotions, and the ambiance of the era.

This is Richard Mason’s fourth novel, and he is a talented writer. His storytelling carries the reader quickly and with ease. The emotions of his characters are nearly as florid as the Belle Epoque scenery, and whether they seem believable or not will depend on how engaging you find the story.

Many readers will enjoy this easy read. Just as Piet Barol crassly and carelessly pursues the life of the bourgeoisie, the novel itself poses as literature but teeters on the border of a romance paperback. Its explicit homoerotic scenes will be gratuitous for some readers, and more titillating for concupiscent book buyers.

The denizens of History of a Pleasure Seeker enjoy sex, art, wealth, and status; and some readers will cheer them on while avidly following their stories. It is not so much the protagonist who is a pleasure seeker as it is the reader who enjoys this sort of novel; and there is not a thing in the world that is wrong with reading for pleasure or enjoying fictional settings.

For readers who come to a book by Knopf expecting more than a quick read, the author has missed opportunities in crafting History of a Pleasure Seeker. Maarten Vermeulen-Sickerts is a man of taste, and the objects he collects provide an excuse for extensive portrayals of the French Rococo designs. But why would a man concerned with displays of modern opulence surround himself with objects from the mid-18th century?

Holland in the first decade of the century thrived with exciting art and design. There is no mention of the Nieuwe Kunst (Dutch Art Nouveau) movement that was so vibrant in Holland at the time: the amazing eggshell porcelains of the Rozenburg factory, the ceramics of Gouda, or the early works of “De Stijl” artists such as Piet Mondrian and Gerrit Rietveld, who were known in Holland in this decade before they gained world renown.

Similarly, the description of Egbert’s mental health shows little sign of basic research. He seems to suffer from a panic disorder (fear of going outside) at the same time that he displays extreme obsessive compulsive disorder. The two disorders are not usually related, and it is unlikely that either one is associated with hearing voices. It is even more unlikely that hearing voices presents itself at such a young age.

Egbert’s happy resolution, which comes about through reason, may make a nice story, but it will require extreme suspension of disbelief from anyone who has sat through a basic psychology course. And what a shame, given the similarities with the case study of “Little Hans” that Freud wrote in that very same time period. Imagine how interesting it might have been to tie in the psychoanalytic thought at the time, much as Irv Yalom has done in his skillfully written historical novels.

For a reader who derives pleasure from historical accuracy and realistically drawn personalities, Richard Mason’s rich descriptions may seem superficial and anachronistic, much like the emotional life of his characters. As with Piet Barol’s dissembling pretense at upper-class manners, the author might mislead an engaged reader with a flurry of convincing facts, but it would not have taken much more effort to portray more complicated inner lives in authentic settings.

The audience for this work consists of those who enjoy romance fiction set in interesting places and historical periods. Readers with different expectations may hope for complex characters drawn in rich historical context. Whether you enjoy this work will depend on what type of pleasure you seek as a reader.