A History of Music for Children 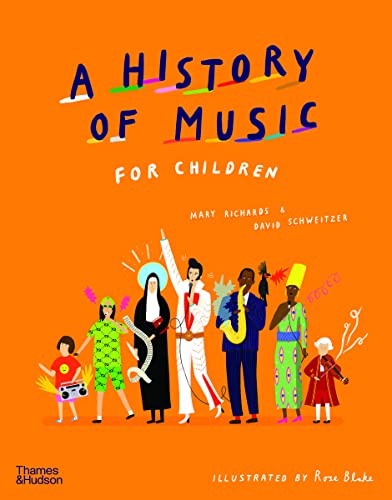 The big colorful book of A History of Music for Children grabs your attention with its orange, oversized cover. Elvis stands in the middle of a line-up including Louis Armstrong, a composing nun, Billie Eilish, Miriam Makeba, Mozart, and others.

Open the book to the royal blue end papers, and continue on to a golden Table of Contents, listing seven chapters with music in each title, and lots of back matter.

Instead of a chronological layout, the book begins by asking What is Music? Birds are used as an example of how singing is a form of communication at dawn.

“But unlike humans, birds don’t really sing for pleasure—even though we might like to imagine that they do.”

There’s a lot to take in, but after all, this is a history of music, a very big topic. The authors go on to discuss the first instruments. “In ancient caves or buried deep underground, archeologists have discovered the remains of instruments dating from 40,000 years ago.” This a big concept for the recommended reading age of six to eight years. A teacher or parent might be needed to explain. Ella Fitzgerald makes an appearance on the same page with her quotation, “Music is the universal language—it brings people together.”

Pink pages discuss “Thinking about . . . Sound and Music,” which includes rhythm and percussive sounds. and some random trivial stuff, which is the signature of the whole book and provides maybe the most interesting parts.

Chapter 2 features a composing nun, the father of hip-hop, and Mozart, something for everyone. The next page shows Egyptians, pyramids, and Romans and discusses everything from ancient Greeks to Leonard Cohen.

The Music of the Gods discusses music getting passed down as oral tradition, more about the composing nun, and gospel music, mentioning Tina Turner and Aretha Franklin. They go on to talk about commissioned music

Wind is the next topic, discussing flutes, trumpet, and the didgeridoo. Thinking About the Orchestra comes next, with different instruments shown and labeled as people sit in a semi-circle and play them. Then comes Strings with Jimi Hendrix and how he broke a string at Woodstock. Electronics comes next to round out the chapter.

Chapter 4 is called Feeling Music. Featured performers are R. D. Burham, Mahalia Jackson, and Evelyn Glennie. The Music and our Brains page shows a photograph of Dorothy and Toto from The Wizard of Oz. Music Brings Us Together discusses Carnaval in Brazil, and shows Martin Luther King, Jr, giving his I Have a Dream speech, and talks about Mahalia Jackson (again) Bob Dylan, and Joan Baez singing that day.

Chapter 5 discusses how music was written down, the oral tradition, music on the page, reading music, and drawing music.

Chapter 6 is called Performing and Listening to Music, with appearances by David Bowie, Beyonce, and Thomas Edison for inventing the phonograph.

Chapter 7 is called What’s Next for Music? The featured three are Billie Eilish, AIVA, a computer algorithm, and a baby.

Back matter includes a timeline of inventions, a glossary, ideas for listening, sources, a list of illustrations, and an index. There’s even a playlist on Spotify with a QR code to get you there.

Every elementary teacher and librarian needs a copy of this book. A year’s worth of curriculum lies between the covers of A History of Music for Children. For everyone else, it can be used for a book report, for trivia, and for a general overview of that magic thing we call music.