The History of History 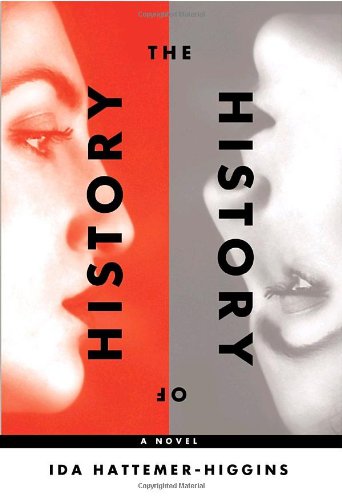 Take note of this novel as you’re sure to hear about it again over the coming months. The History of History is one of those ideas books that from the very first page seem surely destined for one of the big literary awards of the year.

It’s an astonishing act of creation, and a remarkable debut from the Cincinnati-born writer Ida Hattemer-Higgins. It’s breathtakingly good, passionate writing, but at the same time it’s carefully considered, almost ruthless prose that poses some very awkward questions indeed about collective memory, complicity, the city of Berlin and the scars which have been left on it by the Holocaust and the Third Reich.

This is devastatingly intelligent work; Hattemer-Higgins’ world building already reads like that of an experienced master. Her corporeal Berlin comes to life on the page—literally, at times. She doffs a postmodern cap to Salman Rushdie, Kafka, and Angela Carter with her magical realism style, and yet, surprisingly, the writer whose work this most closely resembles is Yann Martel in last year’s Beatrice and Virgil. Like Martel, whose work was critically mauled by all and sundry—but not by the New York Journal of Books—Hattemer-Higgins is trying to find a new way of expressing the Holocaust, and here, she pulls in Faustian allegory, real History, and Her Story as well. For this is an assuredly feminine view of history displayed here. It’s often the “behind closed doors” history, rather than the almost clichéd images of dictators whipping up a furor at a rally. Hattemer-Higgins forces us to look into ourselves and ask: What if?

Of course, given its subject matter, The History of History is not an easy read. Hattemer-Higgins has stated in interview that the book is “structured as an allegory,” and that “it can be read either as Margaret’s (the protagonist’s) personal story, or it can be read figuratively as a fable of a nation that wakes up slowly, after two decades of amnesia, to a recognition of atrocities in its past.” As readers, we are somewhat thrown in at the deep end at the beginning of the book, when we first meet Margaret Taub and find her stumbling through a forest in the German countryside with no recollection of anything that’s happened to her that night. She can’t remember much of her personal history either; that night and everything around it is “an elementary blank.”

With Margaret to guide us, we’re rather lost at sea. Disorientated. As readers we often feel we need a firmer footing, a more solid grounding. We lose our bearings and at times, it is hard to know what is going on, and what the overall scheme is, but we must have patience. Margaret, we learn, looks “like someone who would find trouble, or (. . .) already had.” Which might explain her presence in the forest. As might the fact that in lieu of her own past, she starts to dig in to the dark past of the city of Berlin. From the start she has been drawn to the past because “My own past is not coming.” And she spends the next two years lost in books.

And then a letter arrives from a memory doctor (and gynecologist) named Arabscheilis, which changes everything—including the way Margaret experiences the city that surrounds her.

Even at the beginning of the novel, Hattemer-Higgins has personified the geography, for example, she describes the weather as being in “early tooth,” the trees as having “wept their leaves,” and many more examples, but after meeting with the mysterious, and half-blind doctor, Margaret comes to see: “The city transformed into flesh. When Margaret awoke, there was no stucco or timber any longer, only human flesh and bone.” And: “the streets ran with blood as though water up from the sewers.” And still more: “On the Kreuzberg side, the apartment buildings were tenement-like, covered in tattoos. On the Schoneberg side, there were gold rings on the chimney-fingers, but also much crumbling bone.”

She reads and re-reads “several detailed accounts of Hitler’s last days in the bunker” to try to find some kind of justification for Magda Goebbels’s very domestic crime (which was to poison all six of her children at the end, in the bunker, along with herself). She becomes obsessive about mothers and children and in particular, mothers who kill their babies. She wants to find one narrative which will make sense to her, because: “. . . in a good and just world, children are not murdered for their parents’ crimes.” This is something that echoes poignantly throughout the novel.

As is the repeated avian imagery. What starts with the ‘hawk-woman’ becomes a great flock of birds of prey circling Berlin: “There was something strange about the birds . . . something unsettling. (. . .) They were circling toward the open square and the surrounding canyons and depressed rooftops; they were beginning to alight on the ground. And as they did, their black forms broadened and stretched. (. . .) Each bird grew a face. Each bird stretched into a long, thick, humanoid shadow.

The masses of black shapes, the birds in human shadow form, they moved down out of the sky, floating like dry leaves into the streets, quickly gaining detail: men and women, old and young, all of them withered and tarnished silvery like daguerreotypes. . . . So, they had not been evacuated. So this kind of ghost was in Berlin too. For a moment, she felt the flushest sort of excitement it is possible to feel. They were coming for her. . . .”

The birds clearly stand in place of memory. They have “marked her mind, moved in where memories should have been.” They are, in fact, fairly similar to the psychopomps, which were, in Greek mythology, the guides of souls, and which usually took bird-form. Their role was to transport the dead into the afterlife, but they have also been used as psychological tropes. For example, in the work of Jung, the psychopomp was the mediator between the conscious and unconscious minds. And it is this disassociation between the unconscious and conscious minds that informs Margaret’s psychological state.

She feels desperate to tell the story of the dead because: “The dead do not wish to be forgotten. It is only their suffering they wish to erase.” And yet, she focuses on one family in particular, the Family Strauss, and she starts to think that she can, in some way attain some revenge, or at the very least, justice, for their deaths and for the stolen futures of so many others: “Here is what Margaret knew. At Joseph Goebbels’s incitement, 90 percent of Jewish children—Jews under the age of twelve—who were alive in Europe in 1938 were dead in 1945. Ninety percent of the Jewish children of Europe were tortured to death. These tortured and murdered children will never have children, and these children will never have children. With every generation, there will be a new wave of the unborn.”

She wants to mark their passing, psycho-geographically, because then, “The swallows would speak. The clock would take back its numbers; the balconies would resume the cradling of their lost, cupped lives. The faces of the living would contort to mirror the faces of the dead; the written words would fly like homebound bees to the spoken. The secret meaning of the city would manifest itself, the house numbers alight from the clouds of the mind to fix themselves to the permanent book written underground. The numbers would correspond to the forgotten names, the shadows to the bodies, the palimpsest ache to the threaded ruins.”

But in the end, Margaret realizes “she could not stand atonement through metaphor.” “Her face froze in shame. The Family Strauss—she had latched onto them and used them. She had made them into the perfect sacrifice, just as—her thoughts blackened, swirling in mud—a needy world used Anne Frank, that sweet and self-complete girl, as precisely the sacrifice it needed. To have sacrificed the best, Margaret thought—that was what was craved. Old man history never gets away without surrendering up his prize roses—his hostages of myth and time.”

What counts though, is being able to tell individual stories, warts and all. Story as opposed to history. Because: “If you read some scrap of history . . . you are doing nothing but replaying your own life, only in heavy makeup. The world is pregnant with your own face, and it will never give birth to anything else. You know nothing but this life of yours, which is plain and pure emotion, stripped of all gratification of meaning—just a whimper in the dark. A story, by contrast, is a symphony blooming in the sunlight, trying to draw you away from the chaos. Anyone who doesn’t know this has been nursing herself with lies plugged into her consciousness, as the symphonic soundtrack is plugged into the films in the dark of the movie theater, trying to make us believe that all experience carries an emotion familiar and long since invented, making a case for religion, trying to prove (. . .) that we all know the same beauty.”