The History of Everything in 32 Pages 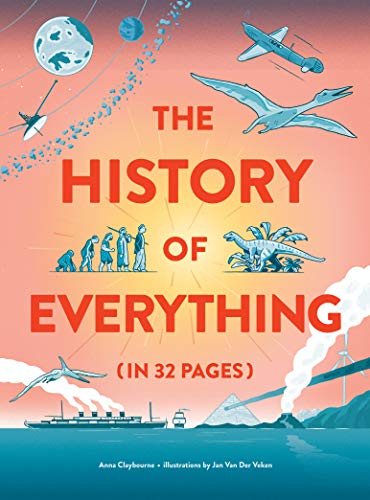 “There is some information to be gleaned, but not enough to make the pages worth turning.”

The promise to fit the history of everything into 32 pages is a daring one. The author Anna Claybourne starts with the Big Bang, providing an accessible explanation of the beginning of our universe, albeit with one bit of misinformation. She writes “This early expansion, the Big Bang, was the start of space and time.” Actually, we don’t know that. We don’t know what there was (if anything) before the Big Bang. Some scientists posit a cyclical expansion/retraction, meaning there could have been many Big Bangs, many universes, before the one that includes us. It is a commonplace to say the Big Bang was the start of time, but that doesn’t make it accurate. And for a book that presents itself as reliable nonfiction, presenting the reader with a factual error on the first page makes one wonder about the caliber of the research throughout. Did the author simply read a Wikipedia page for each entry or did she do more in-depth work?

Taking on all of history in a way that’s accurate and comprehensible means, of course, making choices about what to include and leave out. How can we trust the author to do the necessary research and choose well? When the author explains how life began on Earth, telling us that “Cells are the basic unit of life,” one wonders if that’s true on other planets. Could alien life forms have a completely different basis than our familiar DNA? How can we imagine a science that we haven’t experienced? Wouldn’t it have been better to say that cells are the basic unit of life on earth? Once again, the author hasn’t been careful enough in how she presents her facts, which makes the reader doubt her science.

The author is on surer footing in the following pages since the facts about the dinosaur age and the rise of mammals are more well known. However, the pages on the first humans lacks any kind of discussion on the different “homo” species and what made “homo sapiens” the winner among them. But perhaps that’s asking too much of the limited page space. The problems get more serious with the “Settling Down” and “Cities, Civilizations, and Empires” pages. Condensing such major steps into such an abbreviated form feels too superficial to inspire curiosity or provide any real information. The author tries to include a diverse range of cultures but still manages to give Africa short shrift by ignoring the incredibly rich Mandinka kingdom and the literary history of the luscious illuminated manuscripts of fourth–fifth century Ethiopia.

The rest of the book falls similarly short. This is indeed a brief history of the world, but so brief as to be almost meaningless. The rich detailed art by Jan Van Der Veken helps organize the random information and provides visual interest that the text often lacks, but the illustrations aren’t enough to save the book. A better title than The History of Everything in 32 pages would be A Partial Summary of Historical Events from the Big Bang to Now. There is some information to be gleaned, but not enough to make the pages worth turning.