A History of Art History 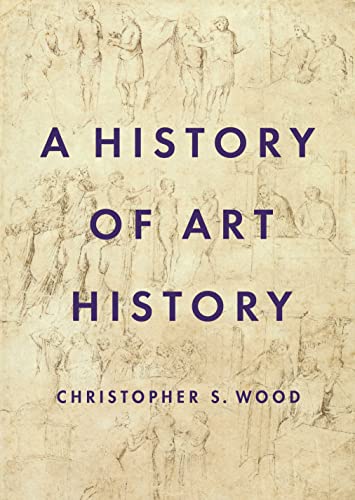 To say that Christopher Wood’s A History of Art History is erudite would be a serious understatement. It is even more so an intense, heavy duty assessment of what the discipline of Art History has thought about itself since its humble inception. As much as the publicist would like to claim this as a work of scholarship accessible to those outside of the world of Art History, Wood’s writing voice and linguistic phraseology is more likely to tie it quite firmly to the realm of the Ivory Tower’s academic audience. A PhD in something would be a handy prerequisite as most other folks won’t have Wood’s baseline lexicon.

Beginning in the year 800 CE but delving much further back in antiquity by way of discussion, Wood attempts to highlight the ways in which people considered art, evaluated art, and tracked the genealogies of artwork and artists over the centuries. He presents an evolution of art historiography that quite often infiltrates, intermingles, and blurs with the boundaries of the histories of other disciplines such as philosophy, archeology, anthropology, sociology, economics, and politics. The debate rages on as to what a collective body of art history scholarship was, is, and should be. Paradoxes abound making its study intricately complex, and, as is Wood’s dilemma, nearly impossible to succinctly articulate.

Wood lays out his thesis that Art History is a precarious subject that both encourages itself and negates itself. Far from fitting into a linear chronology of building blocks, art is staggered and free floating; bound in time, yet timeless; based on an aggregation of forms, yet dissonant.

Identifying the three personas Art History assumes—annalist, typologist, and fable-ist—Wood chases the circles, spirals and loops that inform and produce the artworks associated with each persona. From the history of monuments to the emergence of Christianity to the development of German philosophical writings and the excessively controversial era of Modern Art, Wood painstakingly compares and contrasts key Art History texts.

Considering that Art History as an academic subject originated within the school of Philosophy, it’s no wonder that Wood communicates primarily on this esoteric theoretical level. He seems perfectly comfortable, even giddy, in this world of thought, but he loses the reader in basic writing norms such as run-on sentences and paragraphs that are far too long to follow.

Wanting so much to keep track of the abundant concepts at play, this reviewer (one so ardently committed to Art History) read slowly and deliberately, taking notes, making VENN diagrams and visual outlines connecting point to point, summarizing arguments, and creating timelines of key pivot points. The end result after 400 pages of determination was that it would have been extremely helpful if Wood, who obviously knows this material quite well, had done this himself and offered up such teaching aids as illustrations or appendices. The collection of information could be so much more digestible, interactive, and user friendly.

Oscillating incessantly between the need for Art History and the obsolescence of Art History, the overarching constant is an Art History that is fickle, insecure, and needy, yet overwhelmingly necessary for humanity to pursue. Borrowing from Goethe, Gombrich, Nietzsche, Focillon, Kubler, Berger, and at least a dozen other thinkers, the only thing that is clear is that ideas around art are as varied as the generations that continue to ponder art’s raison d’être and relentlessly make lofty demands of it.

It is a testament to art and its wide-reaching, all-encompassing powers that every identifiable culture on the planet feels entitled to lean so greedily and unabashedly on it, relying on art to communicate their points of views and potentially resolve their collective woes. What can be agreed upon is that everyone wants to use art to promote their own agendas, thus a history of art is a history of the way in which these agendas gained ground and teetered on the shifty edges of influence as the centuries marched on. Understand this context, and one will “get” art history.

After all is said and done, a word of warning, as the reader might walk away from this still not really knowing what Art History is doing. In this head-spinning consolidation of intellectual validations of art historical scholarship, Wood is deliberately and presently inconclusive (by avoiding taking Art History any further than 1960), and A History of Art History takes a verbose method of obfuscating what it is, at its core, intending to illuminate.