His Truth Is Marching On: John Lewis and the Power of Hope 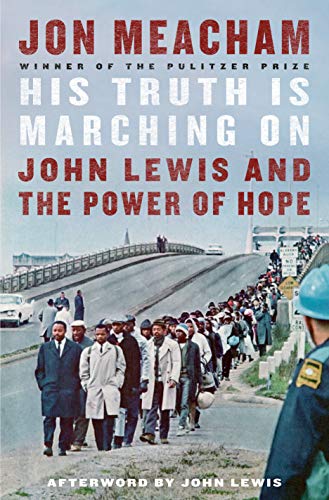 “the stirring His Truth Is Marching On will serve nicely for readers who want to understand the essence of Lewis . . .”

Twice in this admiring portrait of civil rights leader and Atlanta congressman John Lewis (1940–2020), Jon Meacham admits he may be guilty of sentimentality in writing this book. He is correct, if sentimentality is defined as affectionate, tender, or nostalgic. Lewis was a “quietly charismatic, forever courtly, implacably serene man,” writes Meacham, a Vanderbilt historian. He was a humble man, “moved by love, not hate,” who “embodied the traits of a saint.”

As for nostalgia, the author concedes that Lewis’ vision "has been somewhat out of fashion at least since 1966.” In that year, Lewis left his post as chairman of the Student Nonviolent Coordinating Committee (SNCC), a major civil rights organization, as it embraced black power, an ideology with connotations of violence and separatism.

Throughout his life, Lewis imagined people of all races and religions living together amicably. He believed that “hope shaped history—the hope that Lincoln’s better angels could prevail if men and women heeded the still, small voice of conscience that suggested the country and the world would be better off if Jefferson’s assertion of human equality were truly universal.”

“We can create a multiracial community, a truly democratic society,” he wrote.

With a strong focus on Lewis’ actions in the civil rights movement in the 1950s and 1960s (and touching lightly on his 33-year career in the House of Representatives), His Truth Is Marching On celebrates years of courageous youthful activism. While in his teens and twenties, Lewis was attacked by a white mob during a Freedom Ride, spent a month at the notorious Parchman Farm prison, participated in Freedom Summer in Mississippi, and suffered a skull fracture from a policeman’s billy club during a voting rights march in Selma, Alabama. Meacham details all of these events vividly.

In a word, Lewis was a principal in many of the defining moments of the civil rights movement, including the 1963 March on Washington. Why did he dedicate his entire youth to the movement?

“From my earliest memories, I was fundamentally disturbed by the unbridled meanness of the world around me,” he recalled. “Though I was not yet familiar with the words of the Declaration of Independence, I could feel in my bones that segregation was wrong, and I felt I had an obligation to change it.”

His parents lived quietly in Troy, Alabama, where Lewis’ grandfather had been a slave. They never shared their son’s penchant for activism. “Preach the Bible, not civil rights,” they told him. But Lewis had heard Martin Luther King’s galvanizing 1950s radio talks advocating “nonviolent, religiously inspired protest” and read the work of “Social Gospel” theologian Walter Rauschenbusch.

Meacham evokes nicely the forces that shaped Lewis’ vision. Besides his teachers at the American Baptist Theological Seminary in Nashville, his main influences included King, the nation’s most visible civil rights leader; the Rev. James Morris Lawson, then a field secretary for the Fellowship of Reconciliation, a pacifist group, who preached a hybrid of the gospel and Gandhi; and Robert Kennedy, a civil rights supporter whose 1968 presidential campaign Lewis joined. All pointed the way for Lewis to “channel his sense of justice into redemptive action.”

Many readers will find themselves sharing Meacham’s nostalgia for the man and the nonviolent movement for civil rights, which accomplished “more to change America for the better than any single domestic undertaking since the Civil War.”

Meacham notes that Rutgers historian David Greenberg is writing a full-scale biography of John Lewis. For now, the stirring His Truth Is Marching On will serve nicely for readers who want to understand the essence of Lewis who, even at 80, shortly before his recent death, admonished: