His Name Is George Floyd: One Man's Life and the Struggle for Racial Justice 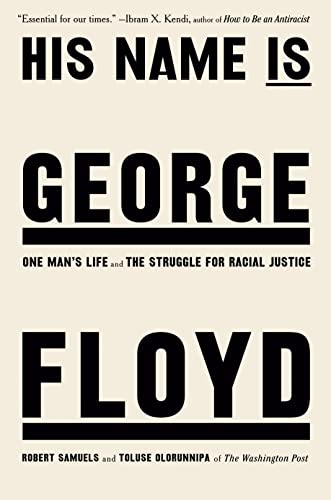 “A sometimes painful read, this revealing deep dive into George Floyd’s life places his tragic story in the broader context of race in America.”

The extraordinary (and cruel) death of an ordinary man.

From his childhood in segregated Houston, to his final days in Minneapolis, where he had sought “a little stability,” George Floyd (b. 1973) was known as a “playful joker” all his life.

Since his death on May 25, 2020, his memory has been hardwired into all our brains by video images of a policeman with his knee on Floyd’s neck for nine minutes and 22 seconds while the 46-year-old Black man, an addict and former high school football star, cried out “I can’t breathe!” 27 times.

He had presumably given a convenience store clerk a counterfeit $20 bill moments earlier.

While Floyd begged for his life, police officer Derek Chauvin dug his knee into Floyd’s neck even more, “a half-smirk on his face.”

Donald Williams II, a 32-year-old mixed-martial-arts fighter, who was passing by, told Chauvin: “You’re enjoying it! Look at you, your body language explains it, you fucking bum.”

“You about to have dreams at night, bro. You’re going to fuck around and shoot yourself, that’s what you’re going to do. That man’s going to haunt you for the rest of your life.”

In His Name Is George Floyd, reporters Robert Samuels and Toluse Olorunnipa of The Washington Post have created a detailed portrait of George Floyd, from his youth in Houston’s segregated and crumbling Cuney Homes housing project through his years of multiple drug dependencies, encounters with police (more than 20 times), time behind bars (one-third of his adult life), and repeated efforts to “reset his life and overcome his past,” while facing the “suffocating systemic pressures” of life in a racist society.

The authors make no apologies for Floyd.

He “readily acknowledged his own missteps and mistakes that made redemption that much more difficult for him,” they write. “He cried to friends about decisions that he regretted and the dark places he sometimes failed to stop himself from descending into.”

They describe his life as a continuous loop back to the old friends and drugging and criminality of his youth in the 1980s and ’90s, even as he struggled to get clean, find steady work, and somehow enter a new world of “nice homes, pets, kids who were not terrified of police.”

His father, a musician, was seldom at home. His mother, a domestic, told Floyd,
“Stay out of trouble, and respect the police.” She raised several children on her own. Floyd looked after a younger brother.

Between 1997 and 2005, Floyd was convicted of eight crimes. It was an era when Houston police were “financially incentivized” to keep arrest stats up, write the authors.

“You had a lot of crack in Houston and officers that needed hours or numbers,” said C.O. Bradford, Houston Police chief from 1996 to 2003. “They would sweep through the neighborhood and make these low-hanging-fruit arrests to keep numbers up. They picked up the same person over and over again.”

Drawing on more than 400 interviews, the authors describe all the challenges Floyd faced. Suffering terrible claustrophobia from his years of imprisonment, he generally left the bathroom door open as an adult. One friend recalled a day when Floyd was locked in the bathroom, and how he whined like a frightened child, desperate to get out.

He also had high blood pressure, anxiety, and depression—all largely untreated. Then there were his drug dependencies. He was addicted to a variety of pills, including Percocet, Oxycodone, Valium, and Codeine. He smoked weed and snorted powdered Fentanyl. He was in and out of rehabs.

His criminal record prevented him from getting most jobs. He once managed to get hired as a truck driver. But he worked most often as a bouncer at clubs and bars, where his size (six foot six, 225 pounds, bulging biceps) proved an advantage.

Despite his daunting appearance, Floyd was a quiet and polite student, timid on the football field (where he was deemed a “gentle giant”), and in adulthood had a friendly manner, often saying “I love you!” to strangers to show he meant no harm.

The authors trace Floyd’s ancestry back to 1857, when his great-great grandfather was born a slave in North Carolina. As a freedman, his ancestor owned 500 acres of land. Whites called him the “rich nigger.”

The land was taken from Floyd’s ancestors in the early 1900s. Victims of the same “fraud, deception, and violence” that caused many Blacks to lose property between 1910 and 1997, they were “demoralized” for decades by their “inability to pass on wealth” to descendants.

“The more we learned about Floyd’s journey, the clearer it became to us that his life also provides a tangible example of how racism works in America,” write Samuels and Olorunnipa. “Floyd’s story, and the story of his family, encapsulate many of the compounding and relentless traumas that have characterized the Black experience for four hundred years. Here, we have documented Floyd’s struggle to breathe as a Black man in America, a battle that began long before a police officer’s knee landed on his neck.

His Name Is George Floyd covers Floyd’s gruesome death, the subsequent trial and conviction of Derek Chauvin on two counts of murder and one count of manslaughter (he was sentenced to 22.5 years in prison), and the global protests against the excessive use of force by police officers against Black suspects.

A sometimes painful read, this revealing deep dive into George Floyd’s life places his tragic story in the broader context of race in America.