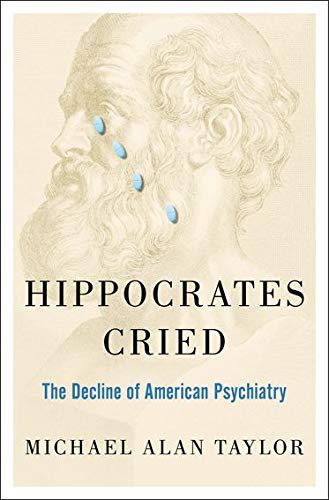 Do not be put off by the urgent tone of Hippocrates Cried, though a more apt title might have been Hippocrates Howled.

The book starts out in anger and frustration at the shape of modern psychiatry. If only Hippocrates’ view of brain and mind had been accurate, the author argues, patients would be better off and so would we.

The author’s examples are laced with outrage supporting correctness of his diagnosis while ignoring concomitant treatment courses. His clinical anecdotes present Dr. Taylor as always right and the rest of the world as wrong.

So you might feel inclined to consider Hippocrates Cried the rant of an angry shrink whose day is over.

Not so fast. Dr. Taylor’s stories may be emotionally charged and somewhat one-sided, but when he moves away from his own experiences and surveys the present state of psychiatry, he offers a sound critique of the pillars of American Psychiatry: psychiatric training, psychopharmacology, and the DSM (with a pungent detour into the evils wrought by the insurance companies). His larger argument is convincing because it marshals evidence, not simply his own opinion.

The Decline of American Psychiatry, he argues, began with the dominance of Freudian psychodynamics in the first half of the 20th century. Dr. Taylor believes that the “talking cure,” as taught to and practiced by the majority of psychiatrists in the 20th century, is worthless. We could debate this, but he is not wrong when he reminds us that non-physicians do much of the therapy practiced today.

The decline of psychiatry was further accelerated by the appearance of the DSM, the diagnostic manual devised by the American Psychiatric Association and universally used for diagnosis of psychiatric patients and reimbursement by all who treat them.

Critiques of the DSM are common, and Dr. Taylor’s analysis comes alive as he demonstrates the dangers to patients of the cookbook style of psychiatric diagnosis. He limns the connection between this bestselling book published by the APA and the insurance companies who force doctors into diagnoses established by a book, not clinical experience.

Finally, Dr. Taylor describes the pernicious relationship between many research psychiatrists and the pharmacological companies that underwrite their research, pay them as consultants, and turn them into spokespersons for their meds. Scandals abound, and they all give lie to research results heretofore considered reliable.

The corruption of medical research by Big Pharma is a well-known fact of life, but Dr. Taylor (re)tells the story with energy and outrage.

Dr. Taylor is heartbroken because people suffering from psychiatric illness are receiving inadequate care. Hippocrates’ famous pledge, Do No Harm, is being ignored. He shows us the dangerous cycle: diagnosis from a book, reimbursement from a number, and treatment with drugs on whose effectiveness we cannot rely.

Dr. Taylor believes that psychiatry is on the verge of eclipse.

Non-physicians do the majority of therapy in the United States today. General physicians prescribe the vast majority of psychopharmacological medications. And neuropsychiatry, the discipline that focuses on the brain, offers the only sensible route to greater understanding, but is not central to the training of psychiatrists today.

Dr. Taylor is a partisan of ECT, a therapy for mental illness popular in the early years after World War II, but which has fallen into eclipse. Now it is coming back as an effective treatment for some types of depression. No enemy of extremes, Dr. Taylor prefers ECT to practically every other treatment, which might leave you puzzled.

But his analyses of the ills troubling modern psychiatry are bracing and offer a powerful challenge to the status quo.

So read his anecdotes with an understanding of his frustration, and wait for Dr. Taylor’s cooler analyses. The content of his arguments are well worth consideration.

Jane Isay was an editor for 40 years. In 2004 she became an author. Her most recent book is Mom Still Likes You Best: Overcoming the Past and Reconnecting with Your Siblings.