Highway of Tears: A True History of Racism, Indifference, and the Pursuit of Justice for Missing and Murdered Indigenous Women and Girls 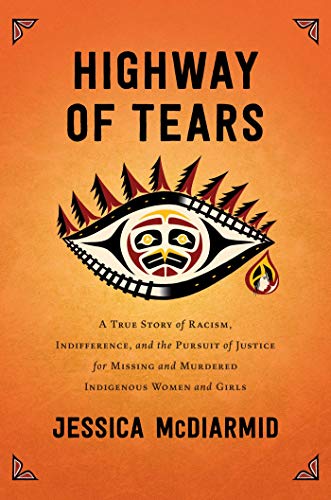 “Highway of Tears is a riveting account of the terror visited on a community when their children go missing, made even more horrific by helplessness felt when polite society and the media ignore them, and law enforcement barely seems to muster a token effort to find them.”

Every society has its “throwaways”—those that the racially or intellectually superior elements of a culture (at least as they view themselves through a prism of exaggerated self-worth) relegate to second- or third-class status, segregated from “proper” society and left to fend for themselves under a mythical “separate but equal” model.

For the families of an unknown number of indigenous girls and young women who went missing along a stretch of highway in British Columbia, being throwaways meant that their loved ones were not deemed worthy of enough resources to investigate the disappearances or to provide media attention to their losses.

So says journalist Jessica McDiarmid in her new book Highway of Tears: A True Story of Racism, Indifference, and the Pursuit of Justice for Missing and Murdered Indigenous Women and Girls (a title that is almost long enough to serve as its own chapter).

According to the Royal Canadian Mountain Police (RCMP), in excess of 1,200 indigenous girls and women have been killed or gone missing in Canada since they started tracking those statistics, with British Columbia, for some reason, shouldering a disproportionate share. It is home to a third of the unsolved murders of such victims, a rate that is twice that of the next highest province.

As Mary Teegee states in the opening sentence of the Foreword, “Because I am an indigenous woman, I am six times more likely to be murdered than my non-Indigenous sister.” A recent Associated Press story reveals that this disparity is not just a Canadian problem, noting that federal studies in the United States show that, on some reservations in the U.S., the rate at which Native American women are killed is 10 times the national average.

In fact, the exact number of actual victims is unknown, made uncertain by shifting criteria for inclusion in RCMP statistics and unreported runaways. “But whatever the number,” the author writes, “too often forgotten is that behind every single death or disappearance is a human being and those who love them, a web of family and community and friendship, those bonds we form that make us strong; those bonds that, when broken, tear us apart.”

Determined to ensure that those broken bonds are not forgotten, and that these are not just statistics, the author narrows the focus to a 725 kilometer (about 450 miles) stretch of highway between Prince Rupert and Prince George in northwestern British Columbia. Dubbed the “highway of tears,” this stretch of road, in particular, like British Columbia, in general, seems to bear a disproportionate share of tragedy.

While it’s unclear who the first victim was, the narrative starts with the disappearance of Ramona Wilson in June of 1994. Over the course of the book, the author addresses other disappearances, some which resulted in bodies being found, and personalizes the victims while highlighting the tragic impact on their families.

Highway of Tears is a riveting account of the terror visited on a community when their children go missing, made even more horrific by helplessness felt when polite society and the media ignore them, and law enforcement barely seems to muster a token effort to find them.  Not all law enforcement, of course, and the author gives credit where credit is deserved, highlighting the diligent efforts of some, such as RCMP detective Garry Kerr.

For Kerr, the disappearance of Alberta Williams in August 1989 would be “[t]he case . . . that stayed with him throughout his career, thirty years investigating cases like it. . . .” The RCMP even considered mounting a task force in 1997, but that was put on hold “because of budget constraints,” even though the possibility existed that the culprit might well be a serial killer. But as long as the victims were deemed of lesser importance, budget constraints won out.

It wasn’t until years later that law enforcement formally adopted an attitude that yes, maybe a serial killer was, or had been, involved. Former Vancouver Police Department Detective Kim Rossmo concluded that “there was a ‘reasonably high’ probability of links between the murders and disappearances in the mid-1990s.”

In some ways, the author starts Highway of Tears with her conclusion, writing in the Introduction: “Not nearly enough people gave a damn when these girls and women went missing.” Sadly, her conclusion is borne out by the evidence she lays out.

Maybe it’s high time to give a damn!