High Altitude Woman: From Extreme Sports to Indigenous Cultures—Discovering the Power of the Feminine 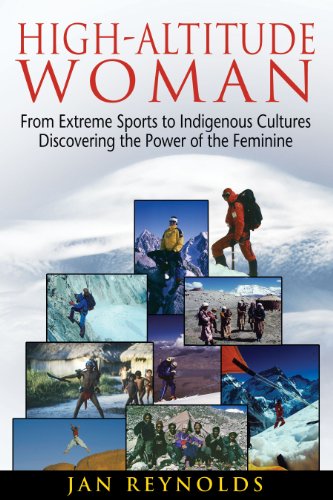 This is a book that can be read as an amazing story of high altitude climbing, skiing, ballooning, and biathlon: and as a commentary on the Great Questions of Our Time, relative to gender stereotyping, nature/nurture and work/life balance. And along the way the author lets us into all the secrets of peeing into a bottle or over the tailgate of a truck . . . as a High Altitude Woman!

In addition to these feats she is clearly also a truly outstanding athlete having inter alia climbed Muztagata in western China, made the Everest Grand Circle Expedition (China, Tibet, Nepal), and accomplished numerous other adventures in the hottest and coldest places known to humans. It would incidentally to be very helpful to have some maps for the geographically challenged reader.

In addition to functioning extremely successfully as “one of the guys” (of which more) in a “in a high-risk traditionally masculine sub-culture” she interacts with several indigenous cultures and sub-cultures (Kirgiz, Kazaks, Tibetan salt traders)along the way whose members seem to be considerably more welcoming and civilized than her usual climbing companions (Ned, Craig, Tom etc). No surprises that Jan and Ned are no longer partners by the end of the book. (“Someday someone is going to smash your nose in” . . . when she intervenes to help him with the stove which he repeatedly fails to master).

Although the author prides herself on being “one of the guys” in fact she survives by putting up with the repeated put-downs meted out to her by Ned and the rest (Jim is the only exception) and by keeping her feminist observations to herself.

She is never allowed to have the map—even though the men lose the map, or run out of map in the most dangerous places; she is left behind, lost, or put in danger by their recklessness, including danger caused by her partner’s passion for taking photographs of her in difficult situations. She is routinely assigned the stereotypical female tasks including picking up after them (memorably Craig knocks over the stove twice and puts their belongings at risk with a scattering of red hot coals); and still when testosterone rages “I jumped in to diffuse the tension.”

A late and short chapter Crossing the Nangpa La which describes (for the National Geographic magazine) her crossing the highest trading pass in the world between Nepal and Tibet, and her interactions with Sherpas and Tibetan salt traders is among the most interesting and most moving, and confirms her view of the arbitrariness of conventional western distinctions into male and female . . . or as she would say “the value of androgyny.”

In the book Jan Reynolds also makes another important journey from a gung-ho attitude of judging life success only by outcomes and results to an understanding of the Buddhist position that it is a person’s intentions rather than achievements that count.

One can only hope that her climbing companions learned something too (aside from the fact that she is willing to share her last handful of granola) but we will not hold her responsible for their enlightenment.