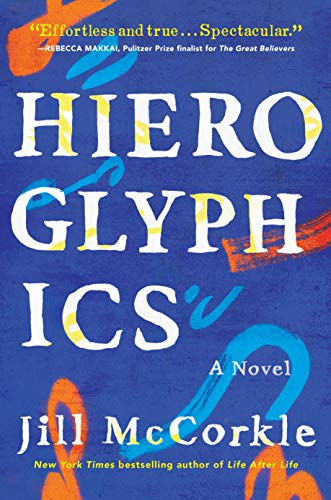 Perhaps any novel that takes place largely in the minds of octogenarians and an arguably distraught—possibly disturbed—single mother may seem to wander over wide psychic territory. Hieroglyphics, Jill McCorkle’s new novel, certainly does, although with her characteristic grace.

Lil and Frank, a long-married couple in their mid-eighties, have relocated from Massachusetts, where Frank was a college professor, to Southern Pines, North Carolina, to be near their daughter. Becca lives in the area where Frank spent the remains of his childhood and his entire adolescence following the 1943 death of his father in the horrific (historic Rennert, NC) train derailment in which his pregnant mother also incurred crushing injuries. The wreck occurred as his parents were on their way home to reunite with him in Boston, where he’d stayed behind with his maternal grandmother.

Frank and Lil had originally bonded over the traumatic wound of having lost a parent at a similarly young age. Her mother had been killed in the Coconut Grove fire, though Lil never knew why she’d been there that night. Lil is a journal keeper, and as she settles now in North Carolina, she is rereading what she’s written over her married years even as she writes new entries addressed to her children, and decides which of her marital secrets to reveal and which they should never know.

In one of her entries/letters to her children, Lil writes, “What you need to know if you don’t already is that infidelity is really about immortality (note the t in there) . . . Some people do things in order to locate a pulse, a breath, a drop of blood. Others do things for ego, the fountain of youth. Dress it up and call it lust or call it love, but really all it is is a call: You’re getting old. You’re going to die. You feel trapped, an animal with its leg caught in the metal teeth of time while everything young and fun is scampering past, all those things you never got to do or see or have. “

Meanwhile, Frank becomes nearly obsessed with visiting the house he grew up in, where his mother recuperated, mourned the death of his father while pregnant with Frank’s brother, and bonded with the local resident, Preston, who like other townspeople, had taken in a crash victim too injured to travel home when released from the hospital. To Frank’s distress, his mother’s promise that they would return to Massachusetts and his beloved grandmother was never kept, and Preston, the benefactor, ultimately become Frank’s stepfather. Frank’s move to the home of a stranger, shared with his pregnant, terribly injured mother, created what he subsequently perceived as an abrupt line of demarcation between happiness and prolonged misery.

As a teen, Frank had stashed some things in a root cellar at Preston’s that he now wants to revisit. But he also longs, strangely, he thinks, to see inside Preston’s house again. He walks the tracks where his father was killed, ruminating on his loss, and, like Lil, inevitably on the course of his life.

“He needs to stand there in that place; he needs to stand and allow himself the vision—of loss and destruction and of himself, ten years old, curled under a blanket in a comfortable house, his eyes closed against the cold northern night sky while waiting for all the good things promised with his parents’ return home. The canteen, the Captain Midnight badge, the Christmas tree he and his father would have dragged along the icy streets. . . .

And why does he feel so close to that part of himself now? The young boy part. That ignorant, grieving part?”

Shelley, the frightened court stenographer who now rents what was Preston’s home with her young son, Harvey—who’s convinced there’s a ghost in the house—refuses Frank entrance time after time. Her mind seems to be all over the landscape, fraught with worries that may or may not be grounded in reality—or truth. Her older son, Jason, who had a different father, is a fine big brother to Harvey, but now he’s left for college. What Harvey has most retained are his stories of monsters and murderers like Lizzie Borden. Repeating them at daycare gets him in trouble. Shelley gets herself into trouble at work as she mismanages the ghosts of her own past.

McCorkle is an insightful, skillful writer and these characters have led complex lives. She takes her time and lets them unpack their baggage slowly, a piece at a time. So when McCorkle suddenly speeds to and through the finish, with Jason—our least known character—making and revealing a major discovery, along with Lil’s revelations and what some may consider the quick end of the novel, is McCorkle suggesting that this is what happens with our lives? We think we’ll have time to make decisions, to work something out, but then, surprise! it’s over and we’re gone. We can go back and reread McCorkle’s ending, of course. No such privilege with our own.