Hide Away (A Rachel Marin Thriller) 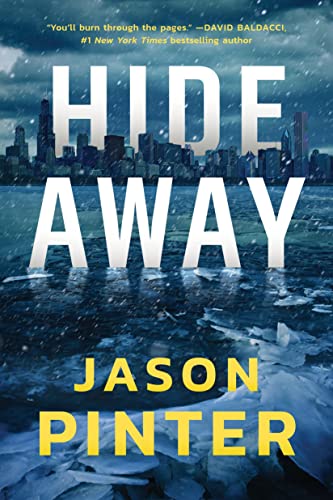 “faithful and true police procedural devotees will thoroughly enjoy the ride Pinter takes them on . . .”

One thing's for sure. You don't want to cross Rachel Marin let alone mess with her. A guy who pulled her into an alley one night on her way home from work learned that the hard way.

"she brought her wrist up so that her palm was facing her nose, forcing the man to straighten his arm, forearm up, to keep his grip. She then snapped her free hand upward against his elbow, hyperextending the joint and tearing the radial and ulnar collateral ligaments. He howled in pain . . .

"Then Rachel turned the flat of her hand into a knife's edge and jabbed her fingers into  his throat. . . . When he staggered back to his feet, [she] used his forward momentum to slam his head against the brick wall. . . . Rachel then pressed the point of her heel into the small crook in his ankle . . ."

Well, she did try to warn him.

As a crack investigator, she has the innate ability to extrapolate a whole host of information from very little data. In this case, a glance at her assailant and his driver's license told her not only his street address, but what the neighborhood was like, the probable size and cost of his house, his marital status, and that he had a daughter. She knew the brand of his expensive cologne, where he usually kept a condom hidden in his wallet and why it wasn't there now. She even deduced how old his jacket was and the name of the detergent his wife used to wash it with.

This incredible skill comes in handy when it comes to analyzing crime scenes. Her conclusions often contradict—correctly—what the forensic techs put in their report. This, of course, does not endear her to them or to the local cops. When her friend Mayor Constance Wright is found dead and the police call it suicide, Rachel knows right away she was murdered. Among other things, Mayor Wright, whose past was marred by scandal, harbored another secret, one that did not fit the profile of someone who would take her own life.

"It had been two years since Constance Wright's life had gone up in flames. The woman had endured indignity, malice, mockery, and cruelty on an unfathomable level. But she'd kept on living. . . . So why would she suddenly decide to end it all now?"

As for Rachel, she has secrets of her own. For one thing, Rachel is not her real name. (She makes the mistake of confiding this to someone she thought was a confidant, and quickly learns she couldn't trust anyone.) For another, she's been in hiding for the past seven years along with her son and daughter. The trauma they escaped has left its mark on her son who suffers from a form of PTSD. Even now at age 13 he asks her to check the front porch every night at bedtime.

"since that terrible night, he'd never been the same. He'd thrown himself into his studies with a zeal that would have most parents overjoyed. But Rachel knew it was to stave off the nightmares, to shield himself from the cruelty of the outside world."

Though Rachel Marin is an interesting and sympathetic lead character, the back and forth time sequences running through the story are a bit messy, and readers will be doing a lot of rereading and skipping around to stay caught up on this convoluted, uneven story. Except for chapter one which would do well as a prologue, this plodding police procedural might have been better told in a more linear fashion.

Pinter's past work has shown he is capable of so much more than is found in this book. All in all, Hide Away lacks the energy and pizzazz of his far more entertaining and suspenseful Henry Parker series, especially his thrilling, fast moving debut The Mark. Nevertheless, faithful and true police procedural devotees will thoroughly enjoy the ride Pinter takes them on this time around, but here's hoping he brings Henry Parker back in his next couple of books.