Hidden in the Pines (A Lew Ferris Mystery) 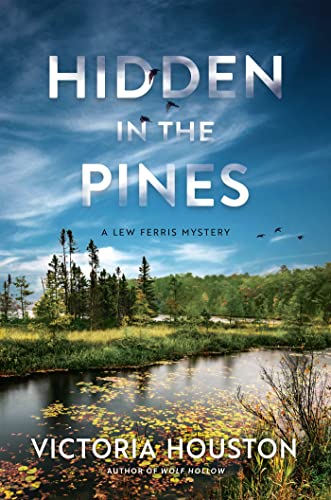 “Watching Lew solve her cases, while still fly fishing on the side, adds up to a solid and relaxing traditional mystery with plenty of Northwoods flavor.”

After 19 mysteries in her Loon Lake series, all with titles starting with “Dead,” Victoria Houston restarted the series Lew Ferris Mysteries—this is the second of the new group, which began with Wolf Hollow. As a result, Hidden in the Pines picks up at Lew Ferris’s first day on the job as newly elected sheriff of a county in the Wisconsin Northwoods. She’s loaded with issues already, but her hard-won role gives her the authority to deal with some that have bothered her for a long time, including a very unpleasant subordinate police chief. Thanks to misogyny and mismanagement from Chief Stern and Stern’s incompetent coroner, one first-day issue is a threatened lawsuit, over a recent murder ruled “accidental.”

This overlaps another messed-up case that Lew won’t know about until one of her new hires brings it to her attention: one from 50 years earlier, but with parallels that put into perspective the ways that slipshod law enforcement and the local buddy system can sabotage justice.

Houston offers smooth and lively action and insight, and Lew Ferris is a classic, a woman in law enforcement with abundant depth of experience and emotion. Her confidence and tough allies let her marshal resources speedily and confront the errant chief, saying, “I have an official autopsy report from the Wausau Crime Lab stating the victim died of blunt-force trauma . . .  And yes, Alan Stern, you are fired.”

That means Lew has a staff shortage, just as a more threatening case begins to spin out of control. Watching Lew solve her cases, while still fly fishing on the side, adds up to a solid and relaxing traditional mystery with plenty of Northwoods flavor.