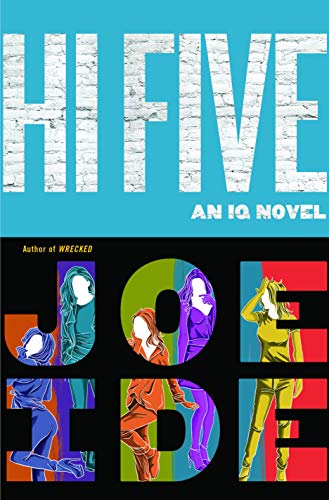 The buzz surrounding Joe Ide at the 2017 Bouchercon Convention in Toronto was palpable as he was presented with the Anthony Award for his debut crime novel IQ. Once he’d also picked up the Macavity and Shamus Awards for best debut in the genre, it was understood that a major new talent had arrived.

The New York Times called IQ “a Los Angeles classic right from the start,” and Crime Time declared it “as impressive a first novel as I’ve encountered in years.” Ide’s lead character, Isaiah Quintabe (IQ), was by turns amusing, supercharged, and “wonderfully clever.”

Ide followed up with Righteous (2017) and Wrecked (2018), and while no other awards were won, the series established a strong following, particularly among the Los Angeles noir crowd that leans toward crime fiction that’s darkish and off-beat.

Which brings us to Hi Five, the fourth installment in the series. In this one, IQ is forced to investigate the murder of a henchman working for repulsive crime boss Angus Byrne. The shooting took place in the dress shop of Byrne’s daughter, Christiana, and the police are about to arrest her as their prime suspect. Frantic, Byrne threatens violence to IQ’s sort-of girlfriend, Stella, unless IQ tracks down the assassin for him.

Fairly straightforward, right? IQ needs to find the real killer, clear Christiana, and Byrne will back off, leaving Stella safe.

Not so fast. IQ soon discovers that Christiana suffers from multiple personality disorder and there are actually five separate identities that he must clear before the police arrest her, at which point all bets would be off as far as Stella’s well-being is concerned.

While the exploration of multiple personalities is less than commonplace in crime fiction and catches our interest up front, it soon bogs down as IQ and everyone else in the story plays a tedious guessing game of name-the-personality as they manifest with random unpredictability. Is it Christiana this time, or Pearl? Or fussy Bertrand? Or whorish Marlene? Or pain-in-the-ass Jasper?

Each personality apparently experienced a portion of the shooting, which means that IQ must piece together five fractured narratives to understand what happened. Interesting up front, but after a while the gimmick lasts too long and becomes tiresome.

Another problem with the novel is Ide’s writing style. His interpretation of LA noir involves riffing on Chandler’s well-known use of similes to inject a humorous and badass tone to the proceedings. Unfortunately, Ide never met a simile he didn’t like. In fact, like would seem to be his favorite word in the language. After a while, your eye skims the surface of his prose, looking for the next like. They crop up multiple times on a page, often more than once in a single paragraph.

Early in the novel a guy is described as looking “lethargic but dangerous, like you were in a canoe and a half-submerged hippo was staring directly at you.” Amusing, yes. But they keep coming. “There was something oddly theatrical about [Jasper], like he was trying to be an asshole, like an actor who hadn’t mastered the part.” And “Angus took a bite so big, he looked like a boa constrictor swallowing a pig.” And a muscle guy who “screamed like a toddler” as his vehicle crashed.

Seriously, folks. Instead of constantly telling us what something’s like, at some point it might be better just to tell us what it is. Chandler’s dead, and his work is archived for fans to enjoy whenever they wish, but perhaps it’s time to move on to other things.

Ide’s prose reaches a low-water mark when we’re forced to follow IQ’s real-sort of-girlfriend Grace to a nightclub, where the dialogue chutters like an automatic shooting blanks:

“As they approached Junior, Deronda said, ‘Don’t he look like a pug? Every time I see him, I want to open a box of Milk-Bones.’

“Junior was lounging on a flouncy pink sofa, his arm around a hoochie girl with thighs like sleeping walruses.

“‘Yes, I remember you,’ he said indignantly. ‘You impaired my sperm facilities for an entire generation. I believe you owe me your condolences.’

“‘Do you think talking like that makes you seem smart?’

“‘Maybe,’ Deronda replied, ‘but you sound like a can of alphabet soup blew up in your head.’”

Okay, enough. Enough. Joe Ide’s fan base continues to dig this kind of writing, and there’s no arguing with taste. L.A. noir has definite expectations it must meet, and over-writing is apparently one of them. But for the rest of the crime fiction-reading public, this stuff just won’t get the job done.

Hi Five is the kind of novel readers will like if they’ve already fallen under IQ’s spell and want more of the same. If they’re coming to Ide’s work fresh off the street, though, they may not get past that can of alphabet soup before dropping this one to look for something else more deserving of their time and attention.