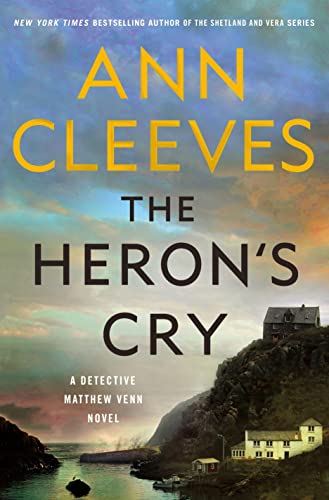 “readers can be assured that the Twin Rivers series will deliver the same intellectual and emotional qualities as its predecessors.”

Volume 2 of Ann Cleeves’ new Two Rivers series, featuring Detective Inspector Matthew Venn, continues the tone and story format of the series opener, The Long Call (a book so successful, it’s already being made into a TV series).

The tone is dark and moody, the story format is multiple murders investigated by Matthew Venn and his team, told through their cycling viewpoints.

Although Matthew and his officers, Jen Rafferty and Ross May, have very different personalities, backgrounds, and voices, they all struggle with the same challenge: how to balance work and personal life while trying to catch a killer.

It amounts to trouble, trouble everywhere. And like in the first volume, the trouble brings work too close to home. Matthew’s husband, Jonathan, again gets pulled into the case because he’s associated with victims or suspects through his workplace, creating marital strife.

Jen, a single mom, gets drunk at a party one night and ignores a friendly man who came to the party just to talk privately with her because she’s a cop, and he needs advice. He turns up murdered the next day, leaving her with burdened with guilt.

Ross, who is ambitious and narrow-visioned, has his eyes opened by relationships that are exposed during the investigation, showing him how his work is jeopardizing what he thought was a happy marriage. Jen has a similar awakening when the case reveals many ways her weaknesses in child-rearing might lead to the same dangers she witnesses in her career.

Meanwhile, the bodies keep piling up.

The murder victims are killed by broken blown-glass artworks made by the first victim’s daughter. And all are associated with the arts community where the daughter lives. But soon another common dominator turns up: People in the arts group and surrounding community are linked to multiple suicides that are linked to the same medical group. Further, individuals from both groups tie into an online organization run by The Crow, a mysterious deathmonger.

Matthew and colleagues separately follow the threads leading into the center of a dark web. Their psychological stress is made worse by the physical stress of an abnormally hot summer. Weather and setting play heavily in Ann Cleeves’ fiction, with place as much a character as the people in every story. Hardly a scene passes where the environment is not evoked, whether in sweeping influence or fleeting sensory detail.

In this series, the Twin Rivers setting is the confluence of the Taw and Torridge rivers on the English coast in North Devon. Its avian denizens provide the titles for both books. In The Long Call, seagulls; in this volume, herons. That bird symbolizes the characters and their crises, as conveyed during a conversation between Matthew and his spouse:

“Jonathan nodded towards the heron. ‘Those birds always remind me of you. So patient. Just willing to wait. Entirely focused on their prey.’ A pause. ‘I wish I could be more like that. But I jump in, all splash and noise.’

“‘That’s like you too then. Silent. I’m never quite sure what you’re thinking.’”

Exchanges like this characterize the novel. “Characterize” is the right word, because the story is character driven, whether related to the causes of the crimes or the actions and complications involved in solving them.

Matthew’s team has to chase a lot of red herrings before they arrive at a solution, giving readers a solid whodunit mystery to connect the human angst and impetus, the time and place and themes.

Although this book works as a stand-alone, it is best appreciated if read after the first. Enough backstory is provided for context and continuity, but individual character development is easier to see and understand if you know what came before.

For instance, the subplot of Matthew’s reconciliation with his mother feels extraneous without knowledge of their relationship, which was established in book 1. His break from her was important in building the man he is when book 2 opens. Ditto Jen and Ross, to different degrees.

Since character and place are the foundation of successful series, and the author’s series all delve deeply into both, readers can be assured that the Twin Rivers series will deliver the same intellectual and emotional qualities as its predecessors.