A Hero of France: A Novel 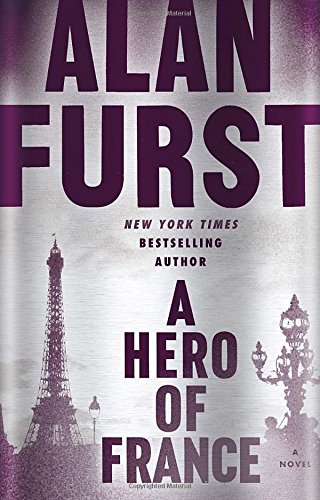 Alan Furst is the empathetic king of deeply researched historical fiction set in WWII Europe. His heroes are intelligent men attracted to complex women. Choosing among his best novels resembles choosing a favorite child: The Polish Officer or Dark Star? The Spies of Warsaw or The Spies of the Balkans? His prose is masterful and concise but in no way recalls Chandler or Hammett; he places the reader inside the landscape of the past and carries us back to a darker, more dangerous time in which we know the end—the holocaust, the devastation—but can't stop it.

And yet this latest novel, A Hero of France, the 1941 exploits of a fortysomething French resistance cell leader under the pseudonym Mathieu struggles to create an urgent narrative arc. Like the cells themselves, the book lacks a cohesive whole. As the cell desperately tries to rescue downed Polish and British airmen and smuggle them out of occupied France, it proceeds in disjointed jumps and episodes, some of them terrifying and tense, many of them less urgent.

A German policeman moves to Paris to break the line of resistance couriers. A skeezy Balkan inmate tries to infiltrate the cell. A sophisticated Parisienne named Chantal moves far beyond the comfort zone of her proper upbringing to dig through filthy used clothes in a marketplace to dress Mathieu for a mission—and has awkward sexual fantasies about a middle-aged policeman on the opposite side of the desk when she seeks false travel papers.

This review expresses the disappointment of an Alan Furst aficionado who for a time has felt like he has wearied of his own books and their subject matter. The research remains. The story returns to the Brasserie Heininger with its "gold-framed mirrors above dark red banquettes, where waiters appear with fin de siècle whiskers" that appears in all his novels like Alfred Hitchcock's cameos. Sometimes the setting plays a central character but here just an epilogue, a reminder that the good life in Paris has always been heightened by a little danger, a bullet hole in a mirror left unfixed above the "favored table 14."

Meanwhile, the sex, however generous Furst is to include the pleasure of the woman as well as the man, seems worn. Must we write another sex scene, Mathieu? Must we invent a soapy episode when the occupation has made us so desperately tired that all we want to do is roll over until awakened by Allied bombing raids? Certainly, Mathieu's relationship with the younger Joelle leaves little to the imagination—except who is this phantom woman that lives in the same hotel? Where is the necessary complexity of her character to make us care about their stolen kisses?

And so it is with deep regret that the reader must resist the many charms of the elegant Furst this time around. The subject of the small actions with big impact that defined the French resistance—the risks average individuals took to be true to themselves and their conception of what it meant to be a Parisian—is an excellent topic for an historical espionage thriller. This is not that passionate novel, only a shadow of it. In Furst's weakest books his heroes appear like ill-fitting suits made for Humphrey Bogart's wardrobe. Sadly, A Hero of France is one of them.