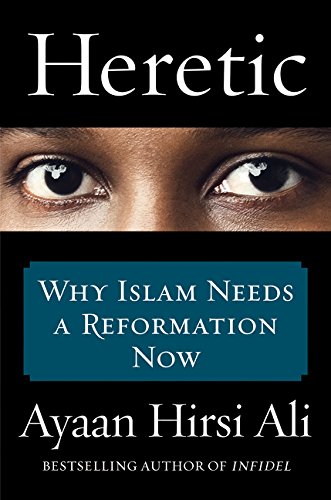 “not a book for the faint-hearted but demands to be read by both ‘westerners’ and Muslims alike.”

One might correctly anticipate from the title of Hirsi Ali’s forthright and riveting book that she is laying down the gauntlet to Muslims with her in-depth look at why she believes there is a need for fundamental change.

She is calling for the kind of reformation that Christians and Jews have already gone through. This, in her view, is essential if we are to live in a harmonious world. Indeed she categorically states at the outset: “Let me make my point in the simplest possible terms: Islam is not a religion of peace.”

Before Hirsi Ali begins to outline her case and set out the five areas for reform she believes are essential to bring Islam out of the 7th and into the 21st century, she extends her challenge to also include western leaders and liberals whom, she states, almost universally believe “the explanation [for this embracing of violence] lies in the economic and political problems of the Muslim world [which] in turn, can be explained in terms of Western foreign policy.”

Apologists are called out with a forceful demand to stop differentiating terrorism or extremism from Islam, and instead to “hold Islam accountable for the acts of its most violent adherents and demand that it reform or disavow the key beliefs that are used to justify those acts.”

So, with a direct threat to her own life already hanging over her and having succeeded in potentially raising the hackles of all sides of the debate, Hirsi Ali eloquently sets out her stall. Her book takes the reader through a concise history of Islam and the prophet Muhammad, neatly interwoven with her own “long and winding journey away from Islam.”

From Africa and Saudi Arabia, and familial rebukes in childhood for her curiosity about her faith, we skip through to her escaping an arranged marriage in her teens and her arrival in Amsterdam where she begins a new life with a fresh perspective on the world and a fine education. Beginning with a humble cleaning job she eventually achieved a seat in the Dutch parliament, becoming an “apostate,” leaving the Islamic faith after 9/11. (Apostasy is a crime punishable by death according to Sharia law).

Hirsi Ali outlines her case extremely thoroughly, beginning with what she considers is the crux of the matter: fundamental issues concerning the Qur’an. This is the holy book deemed to be the direct words from Allah to the prophet Muhammad. It is sacrosanct and cannot be deviated from. The Qur’an and the hadith, a collection of the prophet’s words and deeds, are the basis not only for religious proprieties but also the politics and laws for Islamic nations. This is unique to Islam, and distinctly different from, say, the Christian Bible or the Jewish Torah.

Hirsi Ali suggests that five aspects of Islam require change. The first is “Muhammad’s semi-divine and infallible status along with the literalist reading of the Qur’an.” Citing evidence that “there was a human influence involved in composing what is now known as the Qur’an,” she believes it not to be the exact words of Allah to the Prophet.

This revisionist theory, if adopted, could lead to Muslims questioning aspects of the Qur’an. “If Muhammad and the Qur’an are providing justification for so much wrongdoing in the world, then it must be of more than scholarly interest to apply the tools of reason.” It could, for example, stop providing Boko Haram with the justification for “selling 276 kidnapped Nigerian schoolgirls into slavery” or the beheadings of “infidels.”

The second area for reformation is the investment in life after death, instead of life before death. Hirsi Ali is a mother of a three-year-old son who says she can imagine nothing more unbearable than his death. She thus struggles to understand people like Palestinian Mariam Farhat, “the mother of martyrs” who encouraged her three sons to become martyrs and die attacking Israel. She claimed of her son: “I wanted to choose the best for him and the best is not life in this world.” Hirsi Ali challenges the very essence of the word martyr, comparing the perpetrators of 9/11 flying their planes into their targets and the firefighters who ran inside to save lives at the risk of their own.

Sharia is the third on Hirsi Ali’s agenda to be tackled. This body of legislation derived from the Qur’an and the hadith is “the cornerstone of Muslim life,” a harsh religious code “that keeps Muslims stuck in the seventh century.”

Sharia governs every aspect of a Muslim’s life, not just religion but also home life, governance, and economic, and legal transactions. Describing it as exacting and punishment centred, Hirsi Ali reminds the reader that, for example, after Friday prayers in Saudi Arabia, “many men flock to the central squares to watch . . . the cutting off of robbers’ hands, the stoning of adulterers, and the beheading of murderers, apostates [those who have left the Islamic faith] and other convicted criminals.” These “criminals” might be homosexuals.

This harsh rule of law is supported by “Individuals enforcing Islamic law by commanding right and forbidding wrong,” the next change called for by Hirsi Ali. It is this concept at its most extreme that “provides the justification for fathers, brothers, uncles and cousins who carry out honor killings of female relatives they believe have committed irredeemable transgressions.”

One example she gives is of a young mother of two in the Punjab who was stoned to death by her uncle and cousins because she had a cell phone. Hirsi Ali claims that the control exerted by male family members at home leaves women with no privacy or opportunity to question their lives. It also means there is no marrying for love or loving someone of the same sex.

Finally, the imperative to wage jihad, or holy war is high on Hirsi Ali’s list, and she goes to great lengths to explain “why the call for holy war is a charter for terror.” Perhaps two or three decades ago, few westerners understood the meaning of the word jihad, but now it has become the big question: “Why is this message of death more appealing than the life these folks have been given in their countries.”

One of the Boston Bombers observed: “Know you are fighting men who look into the barrel of your gun and see heaven.” Hirsi Ali states there can be no side-stepping this issue: “The imperative for jihad is embedded in Islam itself. It is a religious obligation.” She likens it to one ghastly, “giant selfie” with scores of Twitter and Facebook followers sending horrific videos viral.

The Muslim population in the USA is predicted to rise from a current 2.6 million to 6.2million in 2030, so what hope does Hirsi Ali have that Islam will be able to live comfortably with the west and its values? She doggedly insists that whilst we live in a tolerant society, we must decide what we will not tolerate; the oppression of approximately half of humanity (women) is a reasonable start point before adding in the persecution of homosexuals, other religions and, indeed, other Muslims.

Hirsi Ali concludes that she is “optimistic,” convinced in recent years that “while Islam’s problems are deep and structural, Muslim people are like everyone else in one important respect: most want a better life for themselves and their children. . . . Atrocities committed by Al-Qaeda, IS, and Boko-Haram . . . has led some Muslim leaders to get serious about taking Islam back from the extremists.”

Iran is cited as an example where, despite thirty years of Islamic rule, there has been a “significant shift in attitudes toward female sexuality.”  And of course there are the inspiring Malala’s of this world fighting for the right to education, with the conviction that it that can facilitate equality.

Perhaps these insights from Hirsi Ali could have been shared at the beginning of the book, rather than the end as tonally, the book is disheartening. Overall it makes for depressing reading, not least her coverage of the increasing numbers of “westernized” Muslims turning to extremist views, jihad, and leaving for IS.

This is, of course, worrying in the extreme, but at the risk of stepping into Hirsi Ali’s targeted “western liberals” camp, one must also consider the many fine, peace-loving Muslims of one’s own acquaintance who are as shocked as everyone else by these atrocities. Though her facts are admirably well researched and presented, there are contradictions and she uses “shock-jock” tactics to force her points home.

Ultimately, Hirsi Ali calls for liberals to support people like her who know what it is to live without freedom: “some of us apostates, most of us dissident Muslims . . . watch with incredulity as you who call yourselves liberals [and] make common cause with the forces in the world that manifestly pose the greatest threats to that very freedom.”

To be able to think, speak, and indeed write such a book without fear is, she says, “more sacred than any religion.”

This is not a book for the faint-hearted but demands to be read by both “westerners” and Muslims alike.